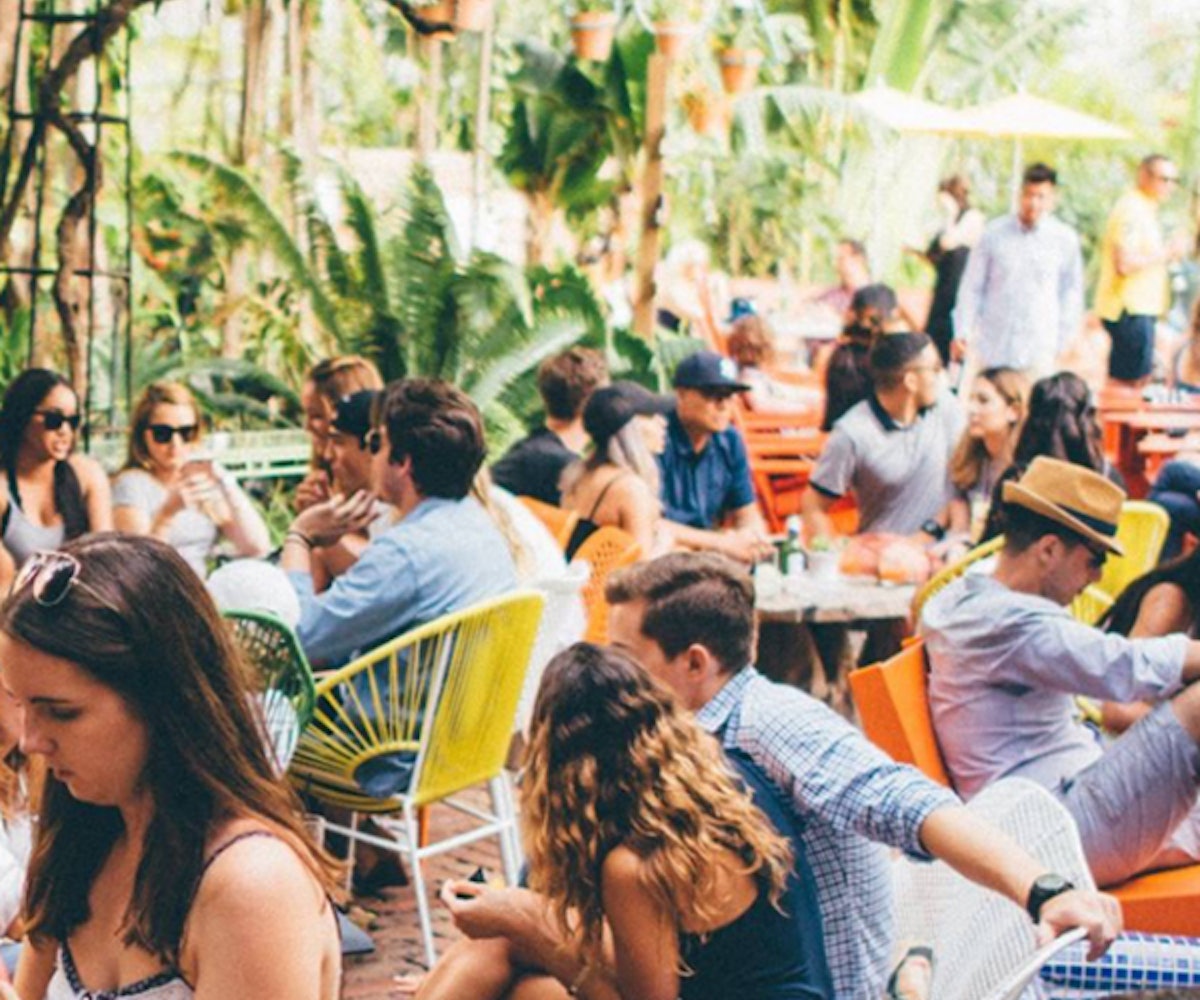 One of life’s great joys is drinking refreshing alcoholic beverages without the burden of a roof over your head. As we make the final approach to the official beginning of summer, the importance of having a reliable place to drink outdoors becomes paramount. But finding the perfect patio or backyard with a relaxed vibe befitting of a sweltering afternoon or a humid evening can be a challenge. In New York City, patios, especially those of the rooftop variety, tend to be overcrowded and overpriced. Finding just the right vibe can be a challenge. So, with that in mind, here’s a list of some of the more unpretentious drinking establishments in the country, should you ever find yourself in one of these cities and in desperate need of a drink outdoors.

The only pure-ish cocktail bar on our list, this Brooklyn newcomer’s ballsy location rids it of any potential snobbery. Located on a desolate stretch of gas stations and auto repair shops, it features a stunning backyard that has tons of plants, hanging lights, swings, and a grill that’s open late. That lack of residential neighbors means that unlike many back patios in the city, this one’s open late.

There’s an unfortunate dearth of seaside bars in this city by the sea, so this Venice landmark is special not just for its elevated, seafood-centric bar fare, or its history—the Whaler has been open since 1944—but also for its expansive outdoor seating, including a rooftop made for taking in the legendary SoCal sunset.

Normally, this sprawling hipster hideaway, with its craft cocktails and perennial line, might not make this list, but compared to the rest of Miami Beach’s gilded late-night offerings, this beautiful backyard at the Art Deco Freehand Motel basically passes for a dive bar.

Philadelphians pretty much call every patio a “beer garden,” but this huge Fishtown drinking mecca actually is one in the traditional German sense of the word, in that it slings wursts and pretzels and serves up its many beer selections in steins. There’s ping-pong, a fire pit, and picnic tables as far as the eye can see.

Austin is the food truck capital of the world (yes, the world), so it makes sense that any outdoor drinking establishment worth its salt has some access to meals on wheels. The owners of Moontower Saloon, a rambling, mostly outdoor bar in way south Austin know this. The bar’s off-the-beaten-path location also mirrors the vibe. You’ll feel like you’re visiting your uncle’s estate in the backwoods of Texas.

NOLA’s unofficial University of Alabama bar tends to get overrun on Saturdays when the Crimson Tide take the field, but otherwise this huge back patio in the Warehouse District, with its ample vegetation, canopy of strings lights, and access to crawfish, is the perfect place to while away the afternoon before tackling the madness of the French Quarter.

A 16,000-square-foot adult playground tucked away in industrial Bushwick, this multipurpose, carefully designed space features ping-pong, birch trees, bocce, benches, and hills. It was founded by the folks behind the legendary Mister Saturday dance party, who have rechristened it Mister Sunday and transformed what is traditionally a day of recovery into one of Brooklyn’s best weekly parties of the summer.

A true dive in a city that’s not really known for them, the interior can be a bit of a drag on a sunny day, but the large patio, where shade is as easy to come by as the sun, is what keeps locals coming back. That and their legendary Bloody Mary.

It’s surprisingly hard to find an outdoor drinking spot in Manhattan that isn’t overrun with tourists and after-work cliques, and on the weekend, the bridge-and-tunnel set. (So many great rooftops, so little space.) That’s why we suggest this neighborhood joint in Alphabet City, with one of the city’s chillest patios and one of the neighborhood’s best burgers.

A great happy hour and a menu of elevated bar snacks are just two of the perks from this newish '80s-themed bar from folks behind Broken Shaker, but the kicker is the outdoor area, a covered space that’s made to look like the surf shack your cousin opened after he quit his job on Wall Street and moved to Costa Rica.

This Tex-mex-inspired bar has been a resounding hit with Houston locals since it opened two years ago, and a lot of that has to do with the very lovely, very accessible back patio, where patrons wash down snacks like late-night breakfast tacos and crab-stuffed fried avocado with flights of the finest mezcal and tequilas.

With its vine-covered exterior, this eccentric and charming establishment can be easy to miss, but, once inside, well, you’re actually outside. Roadside Attraction’s entrance is also its patio, a covered, cozy, and carefully curated rustic hideaway with swinging benches, intimate nooks, and antique-shop artifacts. A true for-those-who-know kinda place.

Any patio with a bubbling pond scores immediate points, which is part of the reason this dive bar’s outdoor space is a cut above the competition. It gives you the sense that you’re no longer in a megalopolis and, instead, chilling near a stream somewhere upstate. The ping-pong and picnic tables also dial up the vacation vibes.

Both gifted and cursed with the rep of a hipster hangout, this Ballard bar’s patio is half-covered, which, if you’ve ever been to Seattle you’ll know, is clutch (it rains a lot). Inside, there’s skeeball and taxidermy galore, but outside, there are relaxed neighborhood vibes to go along with the fresh air.

Notice how there aren’t too many rooftop bars on this list, which was no accident. When you’ve got a view to show off, there tends to be a catch (overpriced drinks, long lines, questionable crowd). Six Feet Under is no such place, offering up views of the ATL skyline (and a nearby cemetery) without the usual nuisances that come with such a perk.

Locals use the opening and closing of this watering hole as a signifier that the warm months have either come or gone. The German-style bar has a smoker out back and is famous for its barbecue, serving up brisket and pulled pork sandwiches to go along with some very cold beer.

This Japanese-inspired garden—kanpai translates to "cheers" in Japanese—from the renowned franchise offers beer slushies, meaning it automatically makes this list just for that. Well, okay, it has ping-pong, board games, boozy popsicles, and Japanese street fare in a breezy space decked out in bamboo, greenery, and paper lanterns.

If there's one thing Germans are good at, it's making cars. If there's another thing, it's soccer. If there's a third thing, it's drinking outside, as evidenced by this beer garden—and all the others on this list. Several years back, this beer garden's lease was threatened until it got extended until 2021, which means more pretzels, sausages, and Berliner Weisse for everyone involved.

In a city filled with stellar food trucks, East Side King, with its Japanese street food, is arguably the best. So the fact that it’s permanently parked in the backyard of this central Austin dive bar is reason enough to go here.

We'll be first to say, this bar does get crowded and bougie on the weekend. Which is why we are making a case for you to come on Monday night when this Cuban-inspired rooftop bar plays host to its Rooftop Cinema series, which include upcoming screenings of La La Land, The Godfather, Dirty Dancing, and The Devil Wears Prada among other favorites. Sip on a frozen passionfruit mojitos from the giant swirl machine (rumor is, frose is next on tap) as you take in Azul's 360-degree views of the Hudson River, One World Trade, and downtown Manhattan—and grab some tacos while you're at it.

This Silver Lake staple took a bit of a hit in clientele when it banned smoking on its atmospheric patio a few years back, which is weird since logic would indicate that it should become even more attractive to this health-obsessed town. Still, this cozy enclave flaunts its Bavarian roots with all sorts of signage and symbolism, which gives it a transportive quality that few venues in the city can match.

The reason we didn't include a picture of the actual outdoor seating area for the Mucky Duck is because, while it's perfectly nice and palm tree-bordered and everything, the real reason to grab a beer at this low-key spot is for the nightly wonder that is its sunset. Avail yourself one of the 16 beers on tap (try the house "Mucky Duck" ale) and head over to the white sand beach with a group of friends—or even solo—to join the crowds oohing and ahhing as that great fiery globe slips into the placid turquoise waters of the Gulf of Mexico. We get that it happens every 24 hours, but it's still a magical occurrence—its magic aided, of course, by the addition of a beer or two.