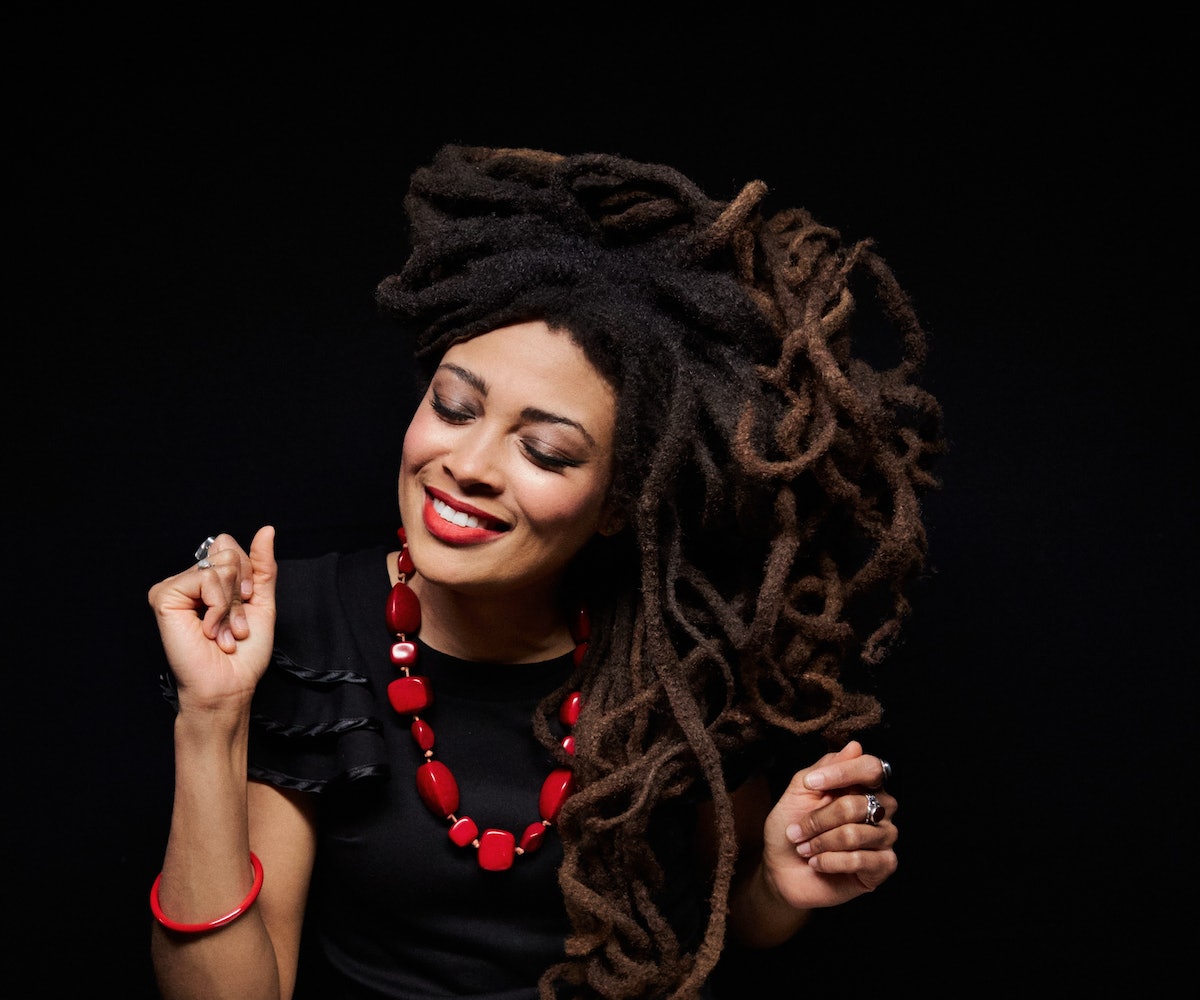 Just from its title—The Order of Time—it’s clear that Valerie June’s latest album is an all-encompassing body of work, one which addresses the existential issues with which we all grapple. And then upon first lesson, it becomes even more clear that the now Brooklyn, New York-based (by way of Tennessee) singer-songwriter’s musical look at mortality and love lives up to its title, thanks in no small part to June’s unique ability to shine light into life wherever she can.

This album was inspired by life's dizzying highs and devastating lows: The same day June suffered the great loss of her father's death, she met her baby nephew for the first time. It all clicked and the title of the record was born.

As a multi-instrumentalist, June is no stranger to experimenting with different genres; she just goes where the music takes her. After taking a three-year break, June’s resurgence comes with an amalgamation of African rhythms, blues, and lush, soulful melodies. The Order of Time sees June at her most vulnerable, contemplating love, heartbreak, family, and how time changes things.

We caught up with June on how the death of her father affected her writing, what it was like working on songs for more than a decade, and what it means to let the light into the music.

It seems like it was a long process to put this album into the world.

The songs were written over the course of 10 to 12 year; some of them I wrote when I was on the road, others I wrote when I was working in Memphis or just after I moved to New York. So, they take place in different times of my life. The songs have their own lives, their own dreams, and their own visions, so I have to respect them. It’s not always time for them to be recorded; as a service to the songs, I just needed to wait on some of them.

It takes time when you’re going toward a dream. It’s a journey more than it is immediate gratification, especially when the songs create worlds for me... each one has a world that I go to when I write it, and I hope that when I share it with people that they can get a taste of what the world that I visited was like, you know? And all of that is part of the time and the process of waiting and getting it right.

This album was focused on mortality and love. Can you talk about that a little bit?

In November, I experienced the greatest loss I’ve ever had in my life because my father passed. And so we went to the hospital, and my whole family—my brothers, sisters, my mom, and all of our partner—we sang around him for about two hours and then his body just couldn’t fight anymore. So, we were very sad and we went to my big brother’s house and he just had a new baby. And I got to see the baby for the first time. And I was like, “Oh my god, that’s just the process. That’s the order of time right there.” We just lost one, and then we got one. The songs go through all these human emotions. They go through work, longing, happiness, sadness, and all of these hopeful things. And such was my father’s life, and the life of Oliver [the baby]. We go through these things, and it’s a cycle of time. It’s beautiful, and I think it’s to be respected.

How did you decide that “Two Hearts” would be the single from the record?

I feel that “Two Hearts” and the place that it comes from is kind of like a fuchsia-pinkish color, [representing] pure love and sweetness. At this time, with the climate of our world, I really feel like I’m called to be a person who really focuses on the light and helps inspire other people to realize their power and the light that they have. We all have worlds, and nobody’s light shines the same, so we live in a lacking world where people aren’t encouraged to live in a loving way, to be respectful of each other, and shine their individual light. But whenever we put out positive energy and sweet things, then we’re motivating people in a way, sometimes unconsciously, to just be reminded of the light that they have. So I feel like “Two Hearts” is a magical song in that way. All songs are medicine to me; they are different worlds combining different feelings and spirits. It’s like pure love.

What were you listening to when you made this record?

Well, it was over the course of 10 years, so there was so many things [laughs]. It’s easier to say what I wasn’t listening to than what I was listening to, because I listen to so many amazing musicians. Generally, I’m not one to sit down and listen to fusion jazz or jazz that don't have lyrics and a singer because I love voices, and I really love voices that have a distinct quality. I love Nico’s voice, and I love Joanna Newsom’s voice, and Dolly Parton’s voice, and Nina Simone’s voice, and Karen Dawson’s voice, and Stevie Nicks. I love how [Stevie’s] voice aged; I love how you hear her singing early on the Fleetwood Mac stuff, and her voice has really got a sweet, clarity to it, and then on “Landslide” it has time and life on it.

I just kind of felt like if I follow my interesting voices and learn also simultaneously from the root of American music, then I can become my own thing, my own individual thing in music. Which is important, because there’s nothing new under the sun and all you can bring is your uniqueness, so that was kind of my motivation.

How is this record different than your last record?

In a lot of ways. The only true difference would be that I co-wrote half of the songs on the last record and on this record I wrote all the songs myself, so that’s a big difference. But besides that, the style of my music is whatever starts to fall. If it’s country, I let it be country. If it’s neo-soul, I let it be that, and if it wants to be blues, I let it be that. I don’t really have much choice about what songs become; I just go with what it wants to be and try to serve it as best I can.

What was it like working with Matt [Marinelli] on this record?

He’s kind of like a quiet force in the music business. He’s done so much with so many different artists: like he worked with Norah Jones, Bad Brains, and Beastie Boys, and so many musicians over the years, and built so many studios. So, I call him a wizard because he has a really long beard and kind of looks like someone who would be on the Lord of the Rings. Those guys on there are pretty wizardly, you know, they’re super smart and they’re geniuses in their own way. That is definitely Matt with sound—he has a great ear.

What do you think a future record would look like for you?

I have no boundaries, in that I myself am an iridescent being, and I feel that the record could go so many different ways and just encompass a certain individuality I’ve been speaking about that just is me. When you listen to Tom Waits, Tom Waits is Tom Waits. Even if he sings a song that has a blues to it, he is who he is. And the same with David Bowie and Townes Van Zandt. I can only say Townes is Townes; I can’t really say much about who he is except that I appreciate what he does. And Robert Plant, who I got to meet and who I find so inspiring because he took the root of music in America. We had a huge talk about how he used the root to grow and become who he was in rock ‘n’ roll. That was so cool because I always felt like that was the way to get that good foundation in folk or blues and country or gospel, and then from there, explore it in your own way. While I respect tradition, I have an alternative ear, and I’m not really one who dwells in the idea of purity and keeping a tradition. I’m more one that’s running that route and seeing where it goes for me on that journey. It really could go anyway, any genre or any style.

Do any of your songs speak to the political climate right now?

I really feel like “Astral Plane” is one like that, and the single “Two Hearts.” The reason why is because when I have been watching all of this, I just felt so called in the way that I need to shine and share, and inspire people to shine. There’s always been that need, and I feel like “Astral” creates that safe space for people. Whenever you get a crowd of people who are all ages and all coming together at a concert or an art show with different beliefs, and they’re all appreciating something and shining their light, then I have to believe that shifts are happening in the world. That’s what music does, and it’s very powerful, in the same way that John Lennon’s song “Imagine” is powerful, or Martin Luther King, Jr.’s “I Have a Dream” speech is powerful. So, my calling is to focus on the light and share that.