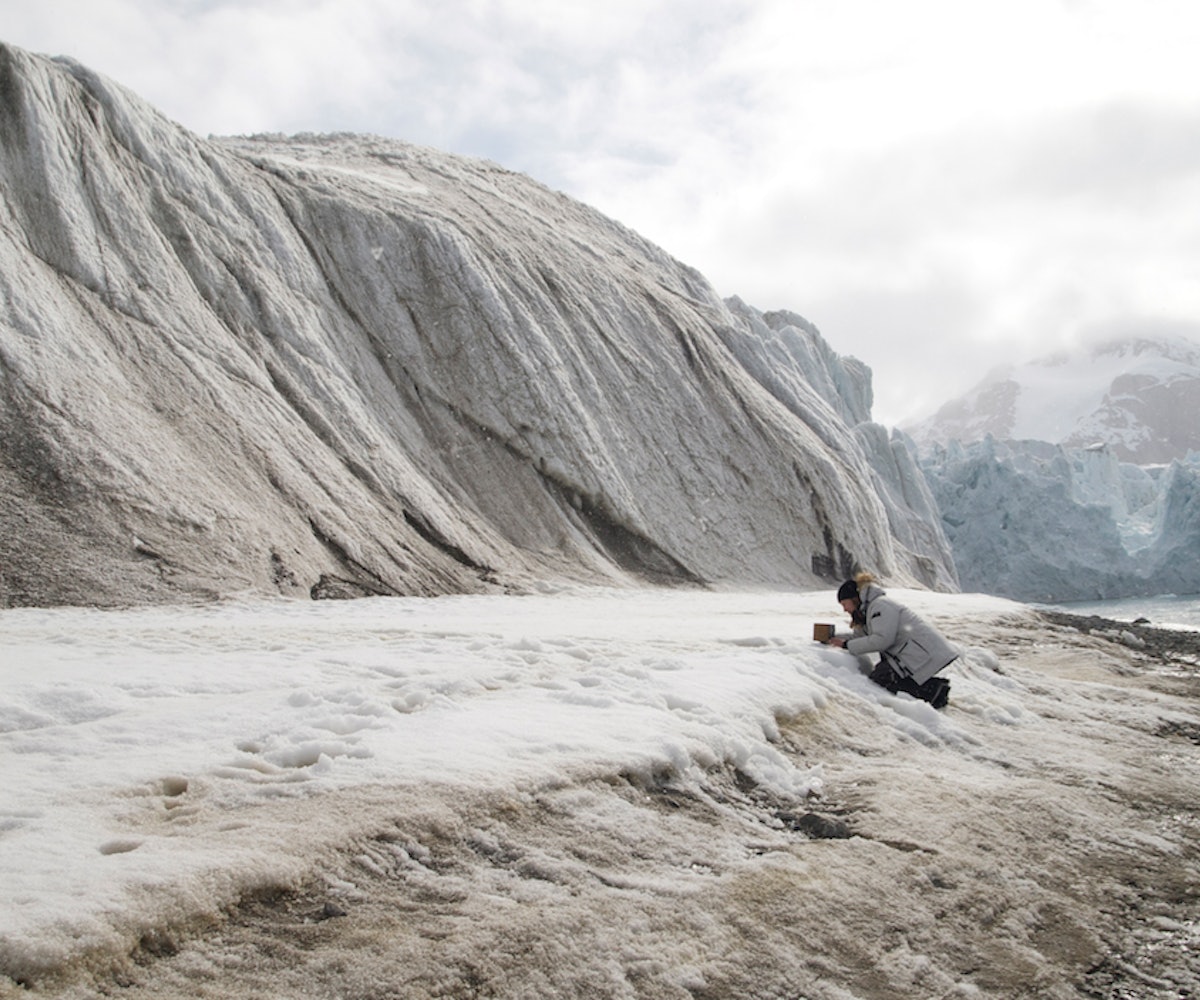 Vanessa Albury devotes herself to processes that generate sublimity through effect, and while her primary practice centers around the moving image, her photographic work fixates on wave vibrations and movements of light and water. Albury is not intimidated by penetrating shadows and obscurity in her work, though she typically resists darkness, preferring to cast a torchlight on her subjects. Her works involve an intensified proximity to the natural world. By experiencing environmental conditions of closeness, her systematic approach to photography and observation at times conjures the practice of a crystallographer, as she examines structures in nature and the play of light across or through them.

Most recently, Albury immersed herself in a study of glaciers, and her solo exhibition, "Arctic, Future Relics," at NURTUREart, a gallery in Brooklyn, New York, this past fall elaborates on the psyche of ice. The artist observed and encountered glaciers in a Zodiac inflatable boat, operating with an astute awareness of capturing forms that are transitory, thawing, dissolving, and disappearing. It's resplendent and anxiety-provoking at once.

When developing her photographs, Albury’s darkroom scenarios shape-shift with negotiated improvisation depending on where she happens to be. She spoke to me about how every darkroom is different but certain aspects remain uniform. Most consistent in this process is an acute sensitivity to light, or lack of light, while developing photographs.

Albury says, "Working in the dark requires using heightened senses of touch and memory, such as remembering where the focusing knob is, unrolling and clasping paper without sight... your mind goes to different places... a dreamlike place." During a two-month residency at Kunstvarteret Lofoten in Norway, she converted a janitor's closet into a darkroom, developing the photographs with fire: "I exposed the paper through a distressed mirror I found in the basement in my little 3-by-5 darkroom with candles and matches. Then I developed them in the expired developer, giving a metallic tan-gray tone to the black-and-white paper."

This experiment prepared her for the challenge of creating a darkroom on a sailboat during her participation in the Arctic Circle Residency Program, which occurred in 2014 around Svalbard, Norway:

So while living on the ship for about three weeks, I shot 106 sheets of 4x5 film with a wooden pinhole camera, and some 60 or so rolls of 120 film, and the scientist Tom McCormack from the U.K. let me turn the shower bathroom in his cabin on the boat into my developing darkroom room. You need a pitch-black room to develop 4x5 sheet film. So I would rock with the waves in the tiny cabin bathroom, feeling my way through the developing of the negatives. Then I had to hang them to dry, and I actually used the engine room all the way in the lowest deck of the ship. A few negatives fell to the hull and the metal machinery down there, so they have some nice dirt and such and such embedded or scratched into the images. The development was also a little irregular with the extra care I had to take to stay standing in the darkroom, so there are some welcomed irregularities that present like liquid splashes and pools in the negatives from that.

In Eric Wilson’s The Spiritual History of Ice, he observes that “ice suggests conclusions while water intimates introductions... Ice is the axle. Water is the turning world.” Albury’s impulse in capturing glacial patterns allows for an ecological awareness of potentially irreversible conclusions, or “future relics,” to form in the mind’s eye. Her instinct is to correlate apprehension with absence in her photographic experiments, allowing the viewer a meditative space to encounter—in their own ways—the ends of earth.

Albury on location shooting the glacier at the North side of Fjortende Julibukta bay of Krossfjord in the Svalbard archipelago with her wooden 4x5 camera.