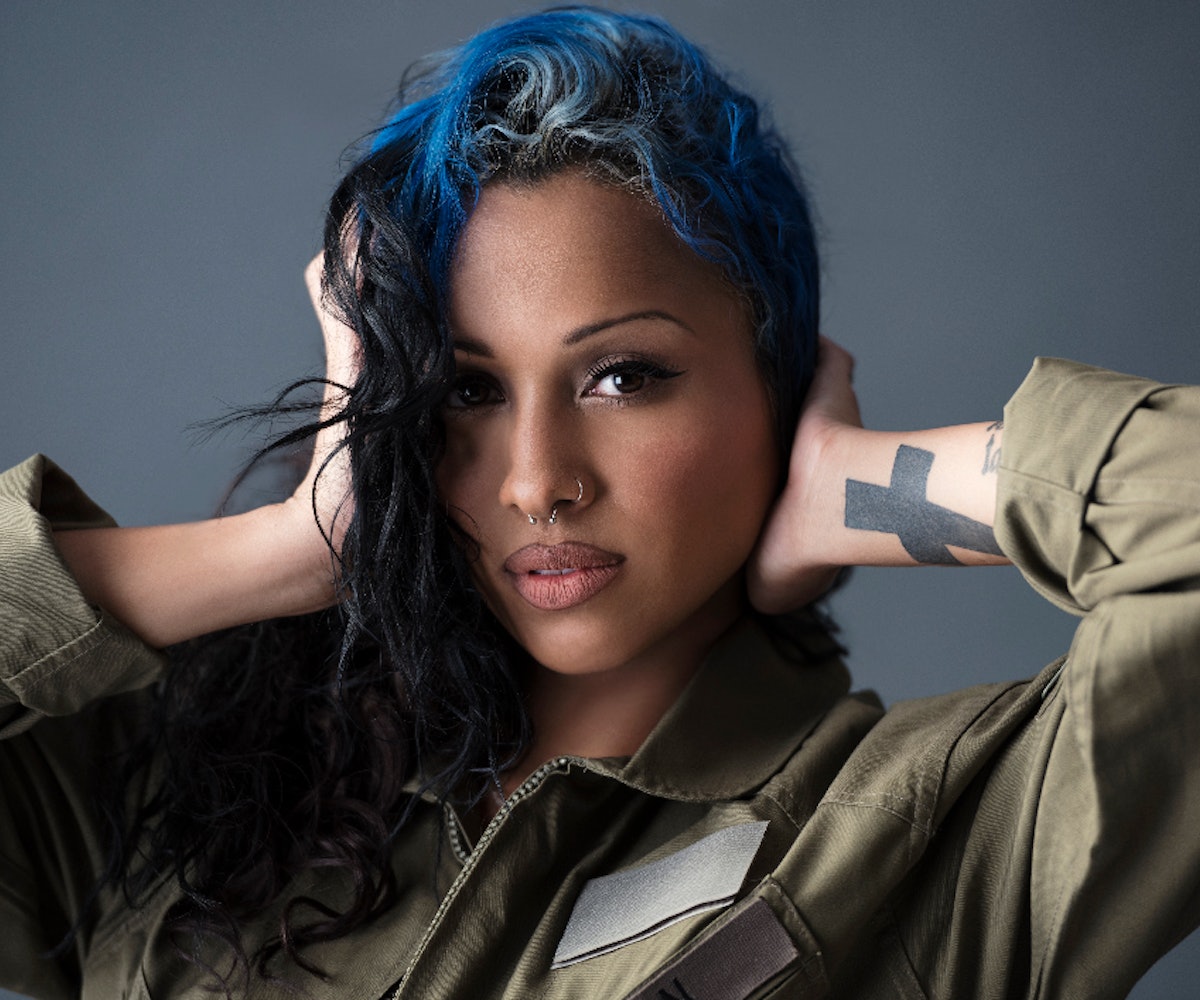 Just last fall, nightlife trailblazer Venus X pulled the plug on her GHE2OG0TH1K party because of some unwelcome appropriation from mainstream voices. Although it was being mined as a tangible, trending aesthetic, the party was originally rooted in a more meaningful mission. A subculture and safe destination, GHE2OG0TH1K became a freethinking underground movement for nightlife outcasts—gay people, women, and hood kids—to unite and push cultural boundaries in music and fashion. As part of Red Bull Music Academy’s month-long New York Festival, Venus X will revive her GHE2OG0TH1K party on May 2, featuring performances by Total Freedom, MikeQ and Sissy Nobby. We caught up with Venus X to talk about working at Jay Z’s club 40/40, being on celebrities’ mood boards, and the Baltimore riots.

How did you first get involved with nightlife?

I first started working in nightlife when I was 19—I got a job at 40/40. That’s Jay Z’s club. I was a cocktail waitress there for about three years. It was a traditional nightclub experience, really bottle-service oriented. It was a different atmosphere because it was standardized. It was a legitimate business—very different from what I started doing later on, which was underground and cash-based. I definitely learned everything that I ever applied to my work as a DJ and in throwing parties—I learned it all at 40/40, whether I knew at the time or not.

While working at 40/40, did you see a void in nightlife that you wanted to fill?

There wasn’t a space that I felt was right for me and the people I was hanging out with, where we could hear different extremes of music and also push the envelope on what was considered downtown New York culture. At the time, there wasn’t this overarching nightlife style, sound or aesthetic that was really attached to our generation. It was a very vintage, like '70s or even '80s aesthetic; the '90s and 2000s aesthetic wasn’t popular yet. We made it popular. No one was going to pay us to play aggressive stuff that didn’t blend together, so we started our own party.

I grew up near the end of Manhattan at 207th Street and Dyckman. It’s a predominantly Dominican community, but I also grew up in the Bronx, which was a little more diverse. There were black people and Puerto Ricans. Really, I just grew up in a bubble with my family; I wasn’t allowed to hang outside or hang out with people who weren’t the friends of my family because the '90s weren’t so safe in my neighborhoods. There were a lot of gangs, and uncles and cousins who passed away on my block. I grew up in a very traditional Dominican household that had very little outside influence.

How did this influence your music taste?

I didn’t learn about hip-hop, rap, and pop until I was about 10 because my mom didn’t listen to it. I was listening to Spanish music; I was listening to jazz—Sadé and Anita Baker—because that’s who my mom liked. My aunt was a little younger and had a black boyfriend who listened to a lot of Biggie, Tupac, and Junior Mafia, but overall my upbringing allowed me to have a good understanding of Caribbean music and urban hip-hop—a lot of Latin stuff. I wasn’t exposed to any rock, punk, techno, or house. My parents didn’t know about being a political radical person. My background is pretty simple.

What difficulties did you face in first creating the GHE20G0TH1K party?

Gentrification was a big issue because of the Lower East Side, where we were throwing our first consistent night—we got a lot of complaints about noise. Establishments didn’t encourage nightlife beyond bar culture, but we always found a way around it and eventually had a warehouse. Eventually, that got way too expensive; gentrification was full-blown—there was nothing we could do to compete, so we got pushed into regular venues, which really weren’t our crowd or taste. The biggest struggle we faced was non-New Yorkers trying to redefine the culture here. They’re not thinking about the fact that this is a city and you need to have an ecosystem with parties—you need young people, fashion, venues; you need people to experiment with culture. A big reason why parties have stopped is because there’s really no space to do them. It shows what New York is prioritizing, and it’s definitely not youth culture.

In the beginning, you weren’t making much money.

I was making $75 a night and I believe I had been fired from my job at that point because they weren’t into me. I was bringing too many lesbians into their restaurant, partying too late and I was a little tired—maybe still high off ecstasy. They fired me and it was my job at that point to DJ, so I learned how to do it really well and made sure that my party was successful. When you don’t have anything to lose you have everything to gain. Why would you stop?

What perspective do you bring to nightlife—an industry that’s so male-dominated?

As women, there’s emotion attached to everything we do because it’s not just us DJing because we’re allowed to—we have to fight for it and we have to stand out. That experience comes across through how I DJ—it’s very raw, very in the moment. It may not sound perfect, but it’s not supposed to be perfect—being perfect is overrated. If you say something should only sound seamless, it’s like saying that someone like Rick Owens or Margiela shouldn’t exist and that’s ridiculous. My method is obnoxious and weird, and it sometimes doesn’t make sense, but in the end I’m still working and that’s what matters.

At what point did you feel it was time to end the GHE20G0TH1K party?

There are only so many referential things you can do before it starts becoming rude and copycat behavior. It’s frustrating to just be the spark of inspiration—to hear that you’re being referenced at this party, your flier was jacked by this big Fashion Week after-party, your DJ set got repurposed by some asshole. And then your whole aesthetic was being pushed by some mega celebrity who doesn’t care about the beats, music, and genres that you created this whole party to service. The visual informs and provides the platform for the DJ and the artist. So when people are like, ‘Oh GHE20GOTH1K is so cool; look at all these cute clothes from Hood by Air,’ they’re getting this new alphabet of sounds they’ve probably never heard before. When a celebrity starts to dress like us, but doesn’t want to act like us, it’s very petty. You don’t care about us, so why would I continue to try to fuel your mood board? These pop stars think this is just a fashionable term, but it’s really about musicians and pushing your audio intelligence forward.

Why do you think trends today move faster than ever before?

People are very self-centered. They just want to be famous really fast and they’re not really thinking about any political motivations when they’re building these Instagram accounts and creating these mythical personas where they’re these badass people, but they actually never leave their house, they never have jobs, and never contribute to the world. People can talk to each other and create identities without having to leave their bed, and that’s scary. I think there are very low standards for what people are doing right now. They don’t care about their legacies. I think people should care a little bit more about the long-term impact of what they’re doing and thinking collectively versus just thinking for the self. I think that morality in combination with social media and the technology that we have today is just at a really low point.

What are your thoughts on the Baltimore riots?

Whether it’s at a political level or a personal level, there’s just not enough vocalization of dissatisfaction, and I think that people need to challenge the norms at every level, whether we’re dealing with a riot or I’m dealing with the music industry. I’m excited for people to continue to riot and I think this is the kind of environment that something like GHE20GOTH1K is going to thrive in. It’s not an aesthetic party—it’s for people who are politically engaged, self-aware, and in the present. The police state is a big part of why culture is really bland and watered-down right now, because of surveillance integrated into our daily lives. We need to express ourselves and we need to feel freedom and equality. These aren’t things that are being promoted.

Looking back on the GHE20G0TH1K era, what are you most proud of?

We’ve been able to reach so many different people’s radars, whether it’s me being on Katy Perry’s mood board or Lady Gaga’s or Revlon’s, or A$AP Rocky telling Rihanna she should do GHE20GOTH1K. I think that’s amazing and obviously it would be great if we had all the other things to go with it, like coin. We’re at the tip of everyone’s tongue and I’m proud that our impact is undeniable at this point.