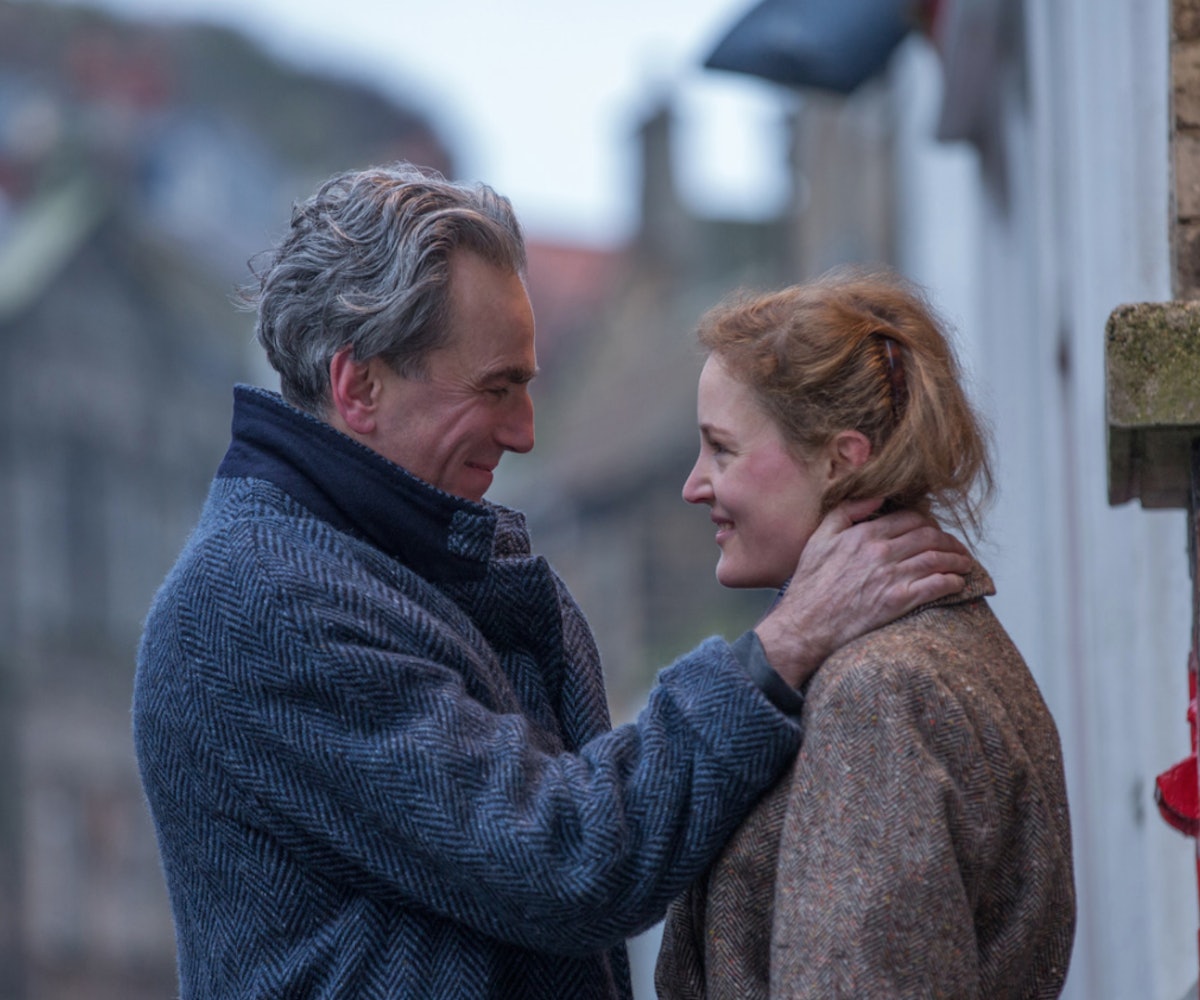 At one point, while watching Paul Thomas Anderson's Phantom Thread, I felt something come over me. Not, like, an emotion exactly (although, yes, I felt plenty of emotions, too), but something tangible, as if everything went gauzy and out of focus for an instant, like some slip of lace had come down across my face. Only once it was there for a little while, once I'd gotten used to it, I could focus again, see through the spaces, and figure out a new way to be comfortable underneath this delicate mask. Was this mask something that was all in my head? Sure, but in the words of Fiona Apple, so's everything.

All to say, Phantom Thread, and particularly the unorthodox relationship at its center, felt sewn into my consciousness since I first viewed it. The peculiar dynamic between 1950s couturier Reynolds Woodcock (Daniel Day-Lewis) and his muse and lover, Alma (Vicky Krieps), is one of the more fascinating depictions of not only a romantic but also a creative relationship I've ever seen. Watching it play out can't help but make you question everything you think about what it means to hold a position of power, the strength that can come with submitting, and the responsibilities we owe to those we love.

Day-Lewis masterfully portrays the hyper-controlling artistic genius, and he is indeed a wonder to behold in what he's said is his last role. But just as wondrous is Krieps, whose portrayal of the enigmatic Alma is one of the most stunning, sensitive, and perversely perfect things I've seen all year. I was lucky enough to talk with Krieps recently about how she came on board the project, what it was like to work with Day-Lewis, and how Alma destroys the stereotypical myth of the muse.

How did you come on board this project?

I first didn’t know what I was auditioning for. I got an email to send an audition tape. I asked my friend to tape me, and we sent a tape. Only, doing it, I didn’t know it was for Paul Thomas Anderson because I didn’t read the email properly. I had just scrolled down to the document, because I’m always interested in the text, and I just knew, Oh I have to put this in tape, and didn’t read the email again. Then my agent called me to say, “The director’s really happy and wants your phone number.” I said “yes,” and she could tell I was a bit too relaxed. Then she said, “Do you know who I’m talking about?” And then, “Paul Thomas Anderson.” And then I realized it. From then, everything was overwhelming and not [overwhelming] at the same time, because if something is so big you can’t relate to it, it’s good, because you then cannot really be nervous because you don’t know what it means. It’s so unreal that you stay calm because you have nothing to relate it to.

So much of what happens in the film happens between the lines. How was it playing Alma and figuring out who she is? Because there’s not really any backstory for her, whereas there’s a little bit for Reynolds.

For Alma, we had definitely more backstory than what you see in the movie, so I did have a little bit of backstory, but it was very little. So I tried to prepare knowing that we wouldn’t rehearse, knowing that I would meet Reynolds the first day, and knowing I would meet a very, very, very strong actor and have to be his partner. So I decided to not prepare... it was almost like meditating. I tried to empty myself of all knowledge about making movies or about Daniel Day-Lewis. I didn’t Google him. I didn’t watch his movies again. I tried to not be thinking about what I think the movie could be or what my performance could be. I tried to forget everything I know as an actor, basically, so that I could be this pure, almost innocent creature, and encounter whatever there is in the most honest and purest way.

While shooting, I was just always very aware of everything around me, and I tried to just listen and answer, you know? I think that’s what acting is in the end, and even if he’s a Method actor and I don’t really believe in words. What is a Method actor? It’s just a name, in the end, it's the same thing. So he’s preparing so much and for such a long time, I think, to be able to let it go and be free and also be aware, and I kind of do the same without being a Method actor. I think this is how we met and how we made it work, or I made it work, or how I was able to be up to it— I was just purely aware, listening to what was happening around me, seeing what was happening around me, and merely replying and answering.

I think that’s so reflective of Alma’s experience, too. It is such a fascinating duality, this interesting analogue of your experience and hers.

Yeah, and speaking of the no words, I think maybe silence was the only way to understand Alma. Like, if I would try to understand her with words or definitions, I would go, “Oh, but now this is happening to her, that’s not good. She would have to be angry now.” But in certain moments, you could only understand the love between the two silently without words and without explanation, just on an intuitive level.

I think that that’s such a big part of experiencing the film, where, while watching, you consider what your natural instincts might be in a situation like Alma's, but then you fight that, because you just realize that it’s not about you, which is... such a vital and special thing in art, when you’ve been captured by something not because it’s relatable, but because it’s so fascinating and compelling, it takes you out of the creation.I think that’s really the effect of the movie, which I love so much. It's, as you said, that you go out and you then think about it [for] five days. That’s a good movie for me, because it’s not trying to sell you anything, it’s not trying to catch you, it’s not trying to make you feel something. It just gives you the insight, and, in this case, it's the very, very private insight of a couple. And then it leaves you to do whatever you want to do with it.

I also feel it’s like this in art, you know? If you see a good painting, the effect that it has on you, you don’t have a reason. You don’t know why you like the smile of Mona Lisa, you just do. And this is why it’s art, and why it’s so good. And, for me, it’s the same with movies, and I find that this movie is not giving you any explanation, it’s not taking you by your hand or guiding you. It leaves you with it, and that’s what’s so nice. And in a way, it’s what Alma does with Reynolds, too—whatever she does to him, she’s never really explaining it or she’s never really doing it to gain anything from it directly. Ultimately, what she does is get him back to the ground, you know? Which I find in every relationship is something that should happen. If you’re together, there’s always a point where you need to re-meet, like re-see yourself and the other one and wake up and go, “Is this honest? Is it honest?” And that’s what I always wish for the movie: That people are at home, and they think, Who is the man in my life? Who is the woman in my life? And what kind of dialogue do we have? What complication do we have? And is it honest?

There are so many stories about male artistic geniuses and the women who are their muses. But Phantom Thread really treats the idea of a muse so differently, in that it subverts the idea that Alma is merely a muse, a cipher, and instead gives her power within that role.As a woman, I had to empty myself, again, with what I think is right or wrong for a woman nowadays in terms of emancipation. And I had to get rid of my ego, because I had to make Alma in a way that, at first, you think she’s weak and you think about a movie like Rebecca, where you think something’s going to happen to her. And I knew this was important because of Paul and then because of what he told me for the movie, but also because of what I believed would make it strong in the end, that it doesn’t come from a reflective place, it’s not like someone going, “I want to be strong! How can I be strong? I need to be strong.” But instead, it's someone who is so open-hearted and honest and then becomes strong from this pure place, and in the end, if she’s stronger than the man... and I don’t think it’s about her being stronger, but them both being equally strong and being in a dialogue... but I knew, for me, if she was weak in the beginning and open-hearted, then what happened afterward was also pure and honest, and not because she needs to be stronger. So if she does... whatever she does to Reynolds, it’s ultimately because she loves him and she wants him to come back to the ground, which I find is a very different approach than a woman showing the man that she’s stronger or whatever.

Definitely, because I think one of the biggest problems with the muse archetype is that she’s essentially an object, and sometimes that object can be perverted into being a weapon by the artist, another tool with which he can demonstrate his dominance. But I think Alma utilizes what is thought of as a muse's weakness, and makes that into her own strength; she weaponizes herself through seeming submission.Yeah, but on a very subtle level, you know? It’s not showing, like, "Oh, by the way, the object has its own opinion and now is going to punch him in the face." It’s very, very subtle. It’s like the object in a subtle way has her own world and universe and therefore maybe can become stronger, without needing the acknowledgment by the outside [world]. I think Alma doesn’t need the acknowledgment, she doesn’t need the approval, and that’s what makes her strong. And I find, especially nowadays, that’s why Alma to me is so interesting, because in this whole discussion now of men making women objects and so on, I think the most interesting part is that, if a woman doesn’t look for the approval, you cannot so easily make her an object, because she just isn’t one. She can then just go for a walk in the woods. Actually, she is completely free, if she would only go.