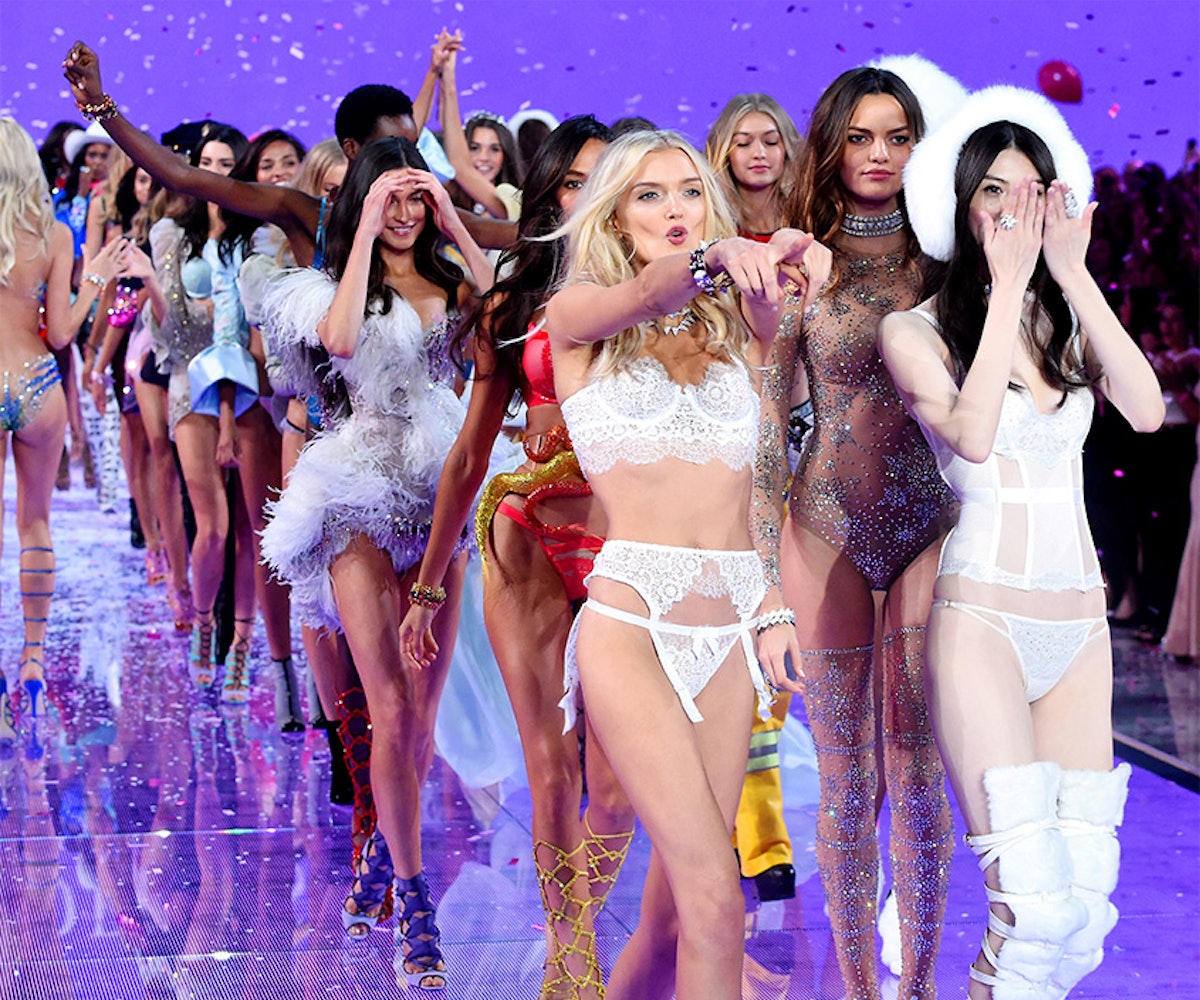 The Victoria's Secret Fashion Show has become something that we find ourselves looking forward to every year. We know that being a model is actually harder than it looks, but the Angels seem like they're always having more fun than anyone. (Granted, if all we had to do was dress in nothing but beautiful lingerie, we would enjoy ourselves, too.) Between performances by Selena Gomez, Ellie Goulding, and The Weeknd, the whole production seems like it might have been one of Victoria's Secret's best runways yet.

Of course, we won't actually get to see the show until it airs on December 8 on CBS, but at least we can admire all of the photos! From rookies to veterans, all of the VS Angels totally slayed. Congratulations to the Class of 2015! Take a look through the gallery, above.

Behati Prinsloo is the hippie flower child we always wanted to be.

The one, the only, Adriana Lima.

Sara Sampaio needs to teach us how to wink like this. ;-)

Alessandra Ambrosio never looked better in nothing but lingerie and feathers.

We totally want to catch a wave and go surfing with Devon Windsor.

Gigi Hadid has blossomed into a beautiful butterfly before our eyes!

Alessandra Ambrosio stopped The Weeknd dead in his tracks because LOOK AT HER.

Constance Jablonski has us starry eyed!

You can't miss Martha Hunt with these wings. ALL of the lights.

Megan Puleri is the astronaut of our dreams.

Lily Donaldson looks like she bloomed right out of a flower.

We're not sure what we love more about Ming Xi's outfit—the metallic balloons or the tule dress!

Devon Windsor looks like a fairy from an enchanted forest.

Of all the things, we want Sharam Diniz's hat the most.

If Gigi Hadid was actually a fireman, there would definitely be an increase in fires around town. Looking RED HOT, girl!

Joan Smalls looks like a goddess, and those cheetah print knee-high boots are to die for.

Leila Nda is the cutest cowgirl we ever did see.

Lily Aldridge doesn't need the rest of the Muskateers.

Maria Borges looks gorgeous with this assortment of bright feathers.

They definitely didn't have corsets like Sanne Vloet's back in the day...

We can't stop staring at Sui He and her #flawless skin.

Bridget Malcolm makes us want to go to a rock show and cause a ruckus in the mosh pit.

Cindy Bruna is giving us some major Beyoncé at the Met Gala vibes.

Jasmine Tookes is bringing back the '70s, and it's working.

Maria Borges makes us want to wear nothing but fringe.

Romee Strijd is inspiring us to start dressing like we're walking in a winter wonderland.

Sui He, the adorable snowbunny.

So much love for the final walk.

Between the feathers and the boots, Barbara Fialho is killin' it.

Jac Jagaciak sort of looks like a butterfly as it emerges from the cocoon for the first time.

Next time we wear sheer anything, we'll channel our inner Kate Grigorieva.

Similar to Ellie Goulding, all you can really do is smile when in the presence of Magdalena Frackowiak.

Martha Hunt, everyone. No words necessary.

Are we the only ones that think Bruna Lirio looks like a sexier Belle form Beauty & The Beast?

Right here, Candice Swanepoel looks like something that a biker would have tattooed on his upper arm.

Constance Jablonski is bringing back bows. Oversized only, though.

Flavia Lucini is wearing the nightgown of our 20-something dreams.

Hi, Kendall. Why so serious?

We'll definitely be taking this outfit with us to the Poconos. Thanks for the inspo, Rachel Hilbert.

Shanina Shaik flying away in this butterfly ensemble.

Nobody looks happier than Pauline Hoarau.

Stella Maxwell wearing all of the wing patterns imaginable.

Ming Xi and Ellie Goulding make us want to cry.

We get it, Romee Strijd—you can wink.

Barbara Fialho leaves little to the imagination, but we totally want this whole outfit.

Cindy Bruna murdered this look! We need this robe, now.

NEXT UP
Fashion
Olivia Rodrigo Wore A Sheer Slip Dress To The 2023 Grammys
Fashion
Apple Martin Is A Chanel Girl Now
Fashion
The Wildest Front-Row Looks From Couture Week In Paris
Culture
The Cutest Couples At The 2023 Grammys
Style + Culture, delivered straight to your inbox.