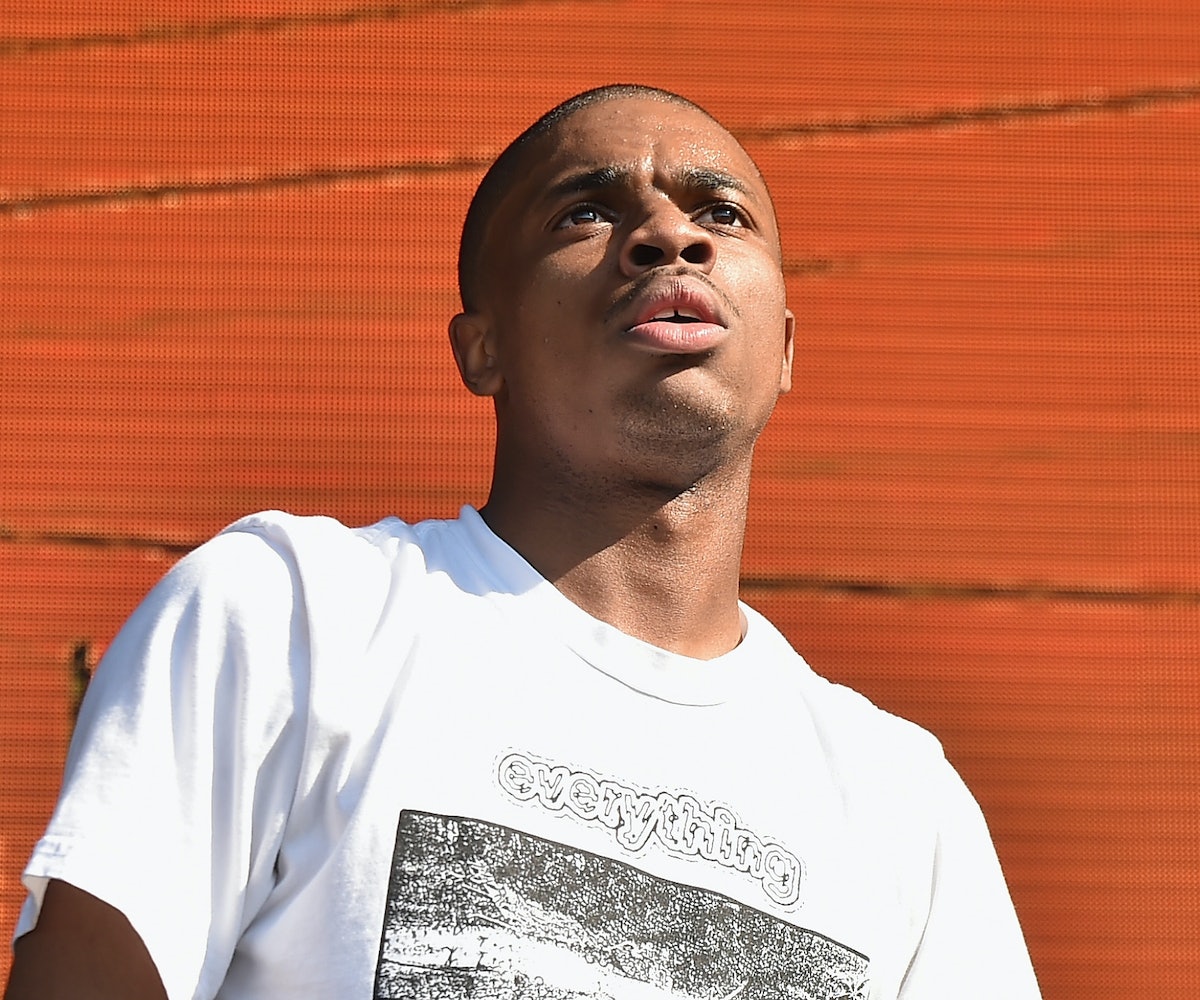 Vince Staples is in possession of a very dry wit. It's as recognizable in conversation as it is in his rhymes. If you listen to his music or read interviews he's given, it can be hard to tell if he’s being completely serious or heavily sarcastic. But when we recently spoke to the rapper, he was genuine and sincere, speaking with the passion and clarity of someone who at 23, has just released a supremely confident EP.

That would be Prima Donna, the seven-track follow-up to Staples' thrilling major label debut, Summertime '06, and his golden ticket into the upper echelon of the rap game. It's a long way from his Long Beach, California, beginnings, where Staples was exposed to gang culture at an early age. His goals back then were simple: Play sports, go to college, and stay out of trouble. But life took a detour when Staples befriended members of Odd Future (Syd tha Kyd and Earl Sweatshirt among them) at the height of the group's popularity. By 2012, Staples was signed to Def Jam’s ARTium imprint—before he even had a driver's license. We recently spoke to Staples about why he never looked up to other rappers, his newfound fame (or lack thereof), his legacy, and how with great rhymes comes great responsibility.

You grew up in Long Beach, California, but also spent time in Compton. What was childhood like for you?

It was kind of like any other childhood, you know. Being a kid, just doing what kids do. There was a lot of trouble, kind of like what most kids experience in one way or another. I never really knew what I wanted to do. As a kid, I didn’t have one specific aspiration.

When did music really come into the picture?

When I was about 16, I was around it a lot. Some of the kids I was hanging out with at the time were involved in making music. So they were already really into the music thing. At the time, I was kind of trying to change my friend group up a little bit for different reasons. So I started hanging out with those new guys.

Do you remember the first thing you ever wrote or came up with musically?

No, it was so long ago I couldn’t possibly remember. But I do know it probably wasn’t that great! It was definitely a cool experience though to collaborate with people and come up with stuff.

As a younger kid, were you influenced by any specific rappers and what they had to say?

No, I’ve never been influenced or inspired by a rapper on a larger scale, at least not consciously. I know when 50 Cent and people like that come out, they’re such big names. People look at that and listen. But I never felt truly influenced by that stuff. I had the privilege of growing up with good people around me, so I had others within my life that I looked up to more. I grew up in a different time of music. There weren’t really many people who were taking that angle of influence. When I was in middle school, it was all about dance crazes in Atlanta. The music that was coming out when I was young was just made for fun. It wasn’t really based on other stuff. Music was more rooted in fun.

Now you’re sort of in the position where youth culture is perhaps looking up to you and listening to what you say, do you feel power in your words?

Nowadays, I definitely think of it consciously. I understand the weight of what we do and what it means. It makes me take the writing very seriously. And I want to make sure that I do the very best that I can to keep people from making mistakes. I don’t want people to think they’re learning things from my music that push them into doing the wrong thing. I want the opposite. I want them to do good things. I obviously don’t want to misuse that power.

Do you see your new EP as a progression from your last album or an extension of it?

I feel like everything has to be a progression. If not, why are you doing it? You’d just be doing the same thing over and over again. I don’t know necessarily if anything is a step forward or a step back—it’s just the next step. That’s what I hope for. That’s what I hope to do. Keep going, no matter what direction that may be. I’m just always thinking, What am I going to make next, you know? That’s really what it is. Just moving.

So what does Vince Staples want to be known for?

I don’t know if I know. I think at this point in time, I just want to be the best that I can be. I want to make the most out of the opportunities in front of me. I want to help the most people that I can. I want to to make music that’s understood, as much as it can be, from each person’s own perspective. We all don’t have to have the same understanding of anything in life, but I want to try to make music that’s a positive thing for anyone who’s listening.

What’s your least favorite part of fame and being in the spotlight?

I feel like there are a lot of good things about the situation I’m in, but I don’t feel like I’m famous. Fame is when you have the paparazzi all around you, the tabloids, you can’t go outside. I don’t have to deal with any of that. I’m just very appreciative of the place I’m in and what I’m able to do through my music. Fame is what Kim Kardashian and Kanye West have to deal with. They’re famous.

Being in the spotlight, do you feel that you’re always having to explain yourself? Like right now?

Yes, for sure but it’s part of the job. I have the privilege of sharing music, and part of that privilege is that people do want to have some understanding of it all. It really doesn’t bother me. I like it.

You’ve said before that there’s no money in telling the truth. Do you feel that way within your own music?

Well, granted, I feel like there is money to some extent. But it’s not always the most lucrative or entertaining. Think about it this way: We love the action movies and the love stories more than we love the documentaries, do you know what I mean? Those things come with the imagination. We work within an industry, or really within an art form, that allows us to tell stories, to use the imagination, and fabricate sometimes. But then sometimes, those stories do come from real things, experiences. That’s a constant in some rap music. That’s how people listening can become influenced, though, and they sometimes do the wrong things. I feel like that’s kind of what I meant by that statement.

Besides music, what other things do you see for your life or want for your future? In five years, where will Vince Staples be?

I don’t know. I definitely don’t see myself doing this forever, but I also don’t see myself quitting anytime soon. I think it’s about doing the most we possibly can and just living out our lives to the fullest. I’m still trying to figure out everything that I want to be involved in, and everything I’ll hopefully have the opportunity to do. There are many perks and so many blessings that come with this situation, and I feel very fortunate.

Can you give us a little background on Prima Donna? I know you worked with several different people on the production side, including James Blake.

James is a really good person, one of my favorite people that I’d ever worked with. It’s good to work with someone who understands and can embrace the way you think. And someone who’s also very introspective, even about how other people think. A lot of times, you don’t work with people who are like that. Most people don’t have that avant-garde perspective on the way they see music. He has that, and it helped me a lot. I could really work with him and pull things from myself. It was so nice to be able to cross over that bridge, and for him to be able to understand what I’m really speaking about. James is one of the first people I’ve worked with who’s really understood how I think, and I don’t feel like I have to explain my music to him. I really appreciate that, you know? It’s not as hard as you sometimes think.

Speaking of collaborations, one of your first was with Odd Future’s Earl Sweatshirt. What was he like?

Earl’s great. We were friends, but we didn’t get really close until we recorded. We went on tour together, and he was always really impressive. He was a good kid and is a great person. He really has a lot to say about his life and his struggles, just trying to make sense of all of it. That’s what makes great music. He’s one of the smartest people I’ve ever met in my life. And one of the most grateful people.

Do you think that young rappers like Earl and Chance the Rapper have staying power? A lot of new rappers really have something to say, but does that last long term?

I don’t necessarily know if that matters. Rappers like those people understand it’s not about them. It’s not about all of that. It’s about the music. It’s about everything else they do, every day. They don’t need all of that because they’re making real music that comes from the right place.

You’ve said before that music doesn’t belong to you. It belongs to the people who listen to it and embrace it and connect with it on a deeper level. Do you feel that with this album?

I feel like that with all music. If I wanted it to be all for me, I’d just record it and keep it for myself. But that’s not what this is all about for me. I just want to make things that have the power to help people.