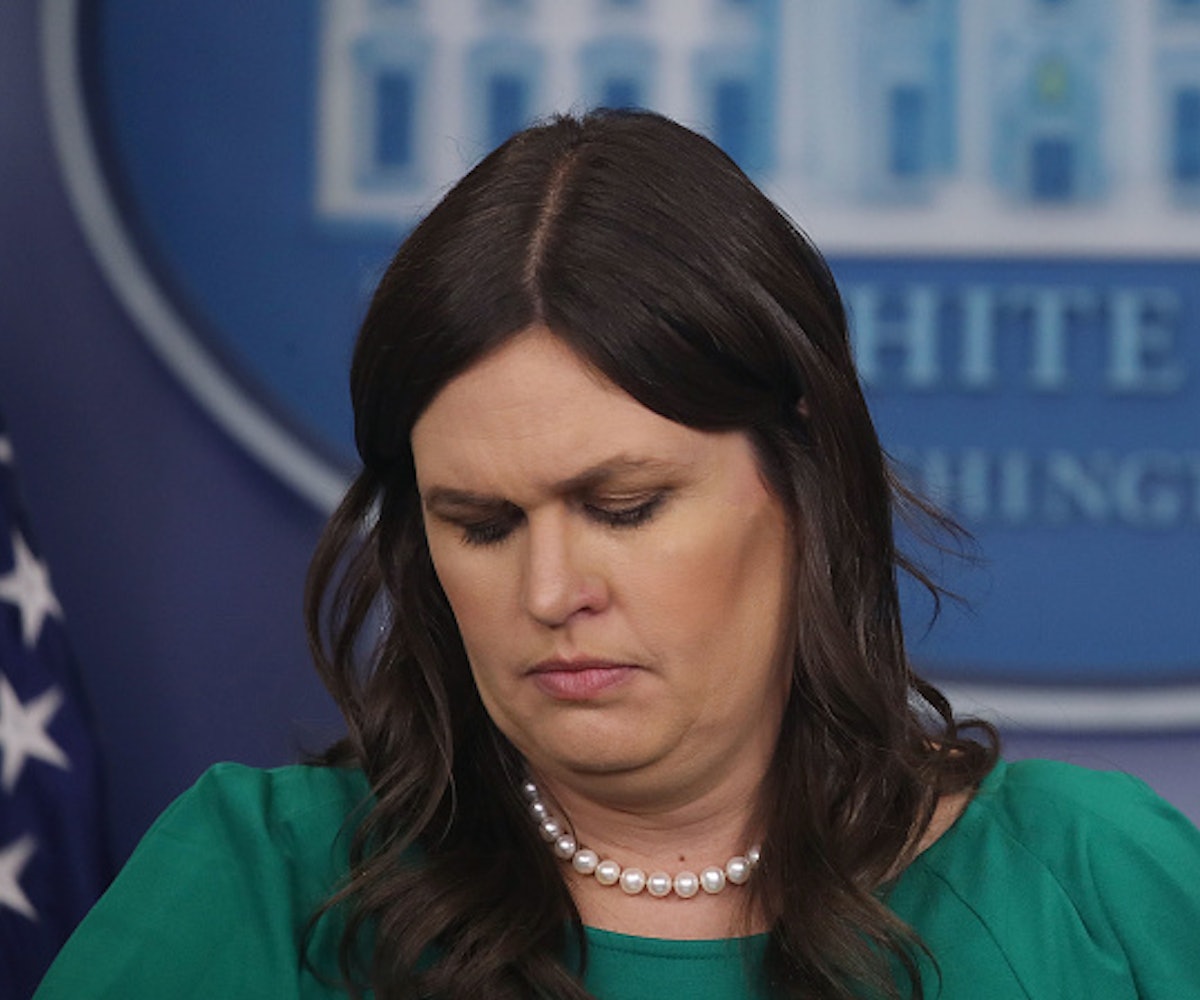 Over the weekend, news broke about two women who were denied routine services at business establishments for wholly different reasons. In the first instance, Nicole Arteaga, a first-grade teacher and mother living in Arizona, was told by a Walgreens pharmacist that he would not fill her prescription for misoprostol, a medicine which can end a failed pregnancy, because doing so ran counter to his "ethical beliefs." And while misoprostol can be used to terminate a healthy pregnancy before 10 weeks, Arteaga explained to the pharmacist that her pregnancy was nonviable and that she was choosing to take this medicine at the recommendation of her doctor as a means to facilitate her miscarriage. Still, the pharmacist refused, leaving Arteaga, as she recounted in a Facebook post, "in tears, ashamed and feeling humiliated by a man who knows nothing of my struggles but feels it is his right to deny medication prescribed to me by my doctor."

The other woman who was denied service was Trump Press Secretary Sarah Huckabee Sanders, who was asked to leave a restaurant in Lexington, Virginia, because staff members were uncomfortable serving a woman who is a direct mouthpiece for the Trump administration. The owner of Red Hen explained the situation to Sanders, asking her to leave. Sanders complied, and then tweeted—from her official Twitter account—about her experience, saying: "Last night I was told by the owner of Red Hen in Lexington, VA to leave because I work for @POTUS and I politely left. Her actions say far more about her than about me. I always do my best to treat people, including those I disagree with, respectfully and will continue to do so."

Outrage was sparked over both instances: There have been calls to boycott Walgreens and the Red Hen, demands that the pharmacist be fired, and the president himself has taken the time to attack the restaurant that asked Sanders to take her business elsewhere.

Walgreens, for its part, says that the pharmacist's refusal to give Arteaga her medication was within its policies and that any pharmacist can refuse service, as long as they refer the customer to another pharmacist for help. The owner of the Red Hen said that she stands behind her decision, explaining that service was not denied to Sanders on sight, but was rather a deliberate decision, made based on the fact that many servers at the restaurant are gay and, she says, "knew Sanders had defended Trump’s desire to bar transgender people from the military."

Many people are using the Sanders instance, specifically, to decry a lack of civility on the part of left-leaning America, with the Washington Post editorial board collectively saying, "Let the Trump team eat in peace," claiming that, by refusing service to someone simply because of political differences, the left is opening itself up to receiving similar treatment from the right. The Post editors even invoked the hyper-divisive abortion debate: "How hard is it to imagine, for example, people who strongly believe that abortion is murder deciding that judges or other officials who protect abortion rights should not be able to live peaceably with their families?"

That would be a good point, except for the fact that the pro-life movement has a long history of harassing anyone who dares to enter a clinic which provides abortion, and that, since the legalization of abortion, multiple people have been murdered for either performing abortions or simply working at places like Planned Parenthood. In fact, conservative and right-wing thinkers are the people who have long exploited the opportunity to deny goods and services to anyone they deem undesirable, whether it's a refusal to make a wedding cake to a gay couple or barring black people from their establishments or preventing a woman in need from getting medical care.

Any admonishment about the left's new incivility, or invocations of Michelle Obama famously saying, "When they go low, we go high" (seriously, fuck you, Meghan McCain), is disingenuous at best, but more likely just smarmy and hypocritical. The right knows exactly what it's doing by promoting a narrative in which it's the same thing to get asked to leave a restaurant, and be made momentarily uncomfortable, as it is to be denied things like essential medical care, or to be discriminated against on the basis of who you are, rather than the bigoted policies which you are helping to enforce. As the owner of the Red Hen made clear, she wouldn't turn away a customer based on their political beliefs but was comfortable asking Sanders to leave because of Sanders' direct role in implementing the policies of a morally bankrupt administration.

But also, it is in conservatives' interests to tell the left to maintain "civility," because, true to their name, conservatives don't want things to change. They don't want to be inconvenienced even as they have no problem, not just inconveniencing, but destroying the lives of millions of others. A veneer of civility is what allows brutality to flourish, and Trump and his cronies know more than anyone that this is the case. This is why, to them, image is everything; it is why Ivanka Trump's Instagram is so carefully curated; it is why the president cares so much about his hair and the glittering facades of his buildings. It is why he called out the Red Hen for being "dirty on the outside," and thus probably "dirty on the inside."

Civility has no place in this discourse anymore. This is a stark issue of morality, and there is a right side and a wrong side, without a middle ground. Those who pretend to straddle it (Meghan McCain... hi), soon enough reveal themselves to be moral cowards who value their own constructed comforts over the needs of everyone. There is no need to be civil to these nightmare people, no need to shake their hands or pose with them in photo ops. The right is talking about these acts of incivility as if they are acts of violence, as if they are equivalent to the literal murders of people like George Tiller, Barnett Slepian, or Heather Heyer. They are not. They are instead a reminder of the ways in which we need to make everyone who supports injustice understand that their lives will not go on as normal, because we are working toward a new normal, in which their legislated brand of hate will not be tolerated.