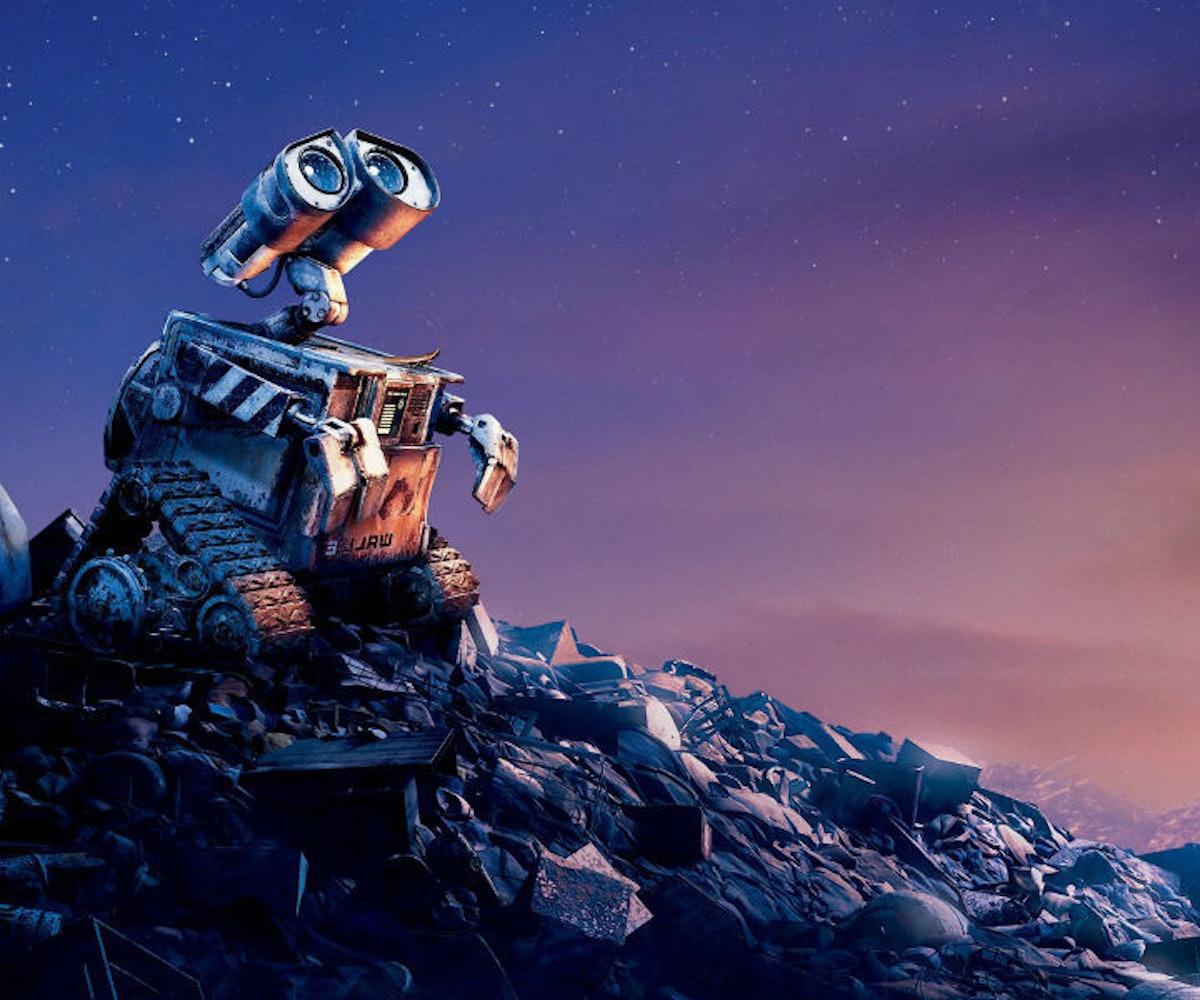 When Wall-E came out 10 years ago, it was met with some of the best reviews in Pixar history. The Los Angeles Times called it “daring and traditional, groundbreaking and familiar, apocalyptic and sentimental.” Rolling Stone referred to it as an “enduring classic,” while Time Out described it as “wonderfully imagined” and “lovingly presented.” And I agree: The film is an example of the Disney animation studio at its most creative. But, even if everyone could agree that the film was visually stunning, not everyone loved the eco-conscious message it doled out (cough, right-wing conservatives, cough).

The film follows a robot, the eponymous Wall-E, who has been stranded on Earth, eternally cleaning up all the garbage left behind by the humans who had to abandon their planet because they'd ruined it. The year is 2700, every remaining human lives in space, and they travel, sleep, and exist on hoverboards and are told what to do by a conglomerate called Buy ’N’ Large. And while the movie was promoted as being a love story between two robots, the narrative also offers an unflinching look at the downside of consumerism, the risks of apathy toward our environment, and humanity's inclination toward sloth.

And yet, Wall-E wasn’t intended as a political statement, according to its director Andrew Stanton. In fact, it was described as a “parable for environmentalists” so often that he felt the need to disavow the label. “I don’t have a political bent or ecological message to push,” Stanton said in 2008. “I don't mind that it supports that kind of view—it’s certainly a good-citizen kind of way to be—but everything I wanted to do was based on the film’s love story, the last robot on Earth, the sentence that we first came up with in 1994.”

This isn't hard to believe, though, not least because it would take an overwhelming level of disingenuousness for Pixar/Disney to promote an anti-consumerist message when they would proceed to capitalize like crazy off Wall-E merchandise. As writer Shannen W. Coffin wrote (sarcastically) about the movie: It’s “nice to see that Disney and Pixar can make mega-millions off of telling us just how greedy, lazy, and destructive we all are.” And, yes, the messenger is ironic, but the message is still an important one: We as a society can be greedy and lazy and destructive. We’re the biggest contributors to climate change, we’re victims of consumerism, and we rely on technology more than we should.

There is, though, another criticism of the film, which is that it's prejudiced against fat people, and it is true that all the humans we see in the film are overweight, and that fact is implicitly connected to their other traits of laziness and apathy. It's an unfortunate visual shorthand for the very real problems that do face people who live their lives in front of screens, and it's not great, but it does speak to real problems that can result in technology-caused stagnation.

But what Wall-E really serves to remind us of is that the scariest depictions of dystopian societies aren’t necessarily the ones that paint the future as being full of handmaids or kids forced to fight to the death for the entertainment of the elite. Sometimes the scariest versions of our futures are the ones that we already see glimpses of in our present reality. Though Wall-E was released 10 years ago, our society’s need to consume and corporations' relentless drive for profit have only increased. Is it any coincidence that so many billionaires, aware of how they've contributed to our planet's decline, are focused on space travel? Now is the time to rewatch Wall-E and appreciate the love story, but pay close attention to the message about greed and apathy, and figure out a way to prevent this future from becoming our present.