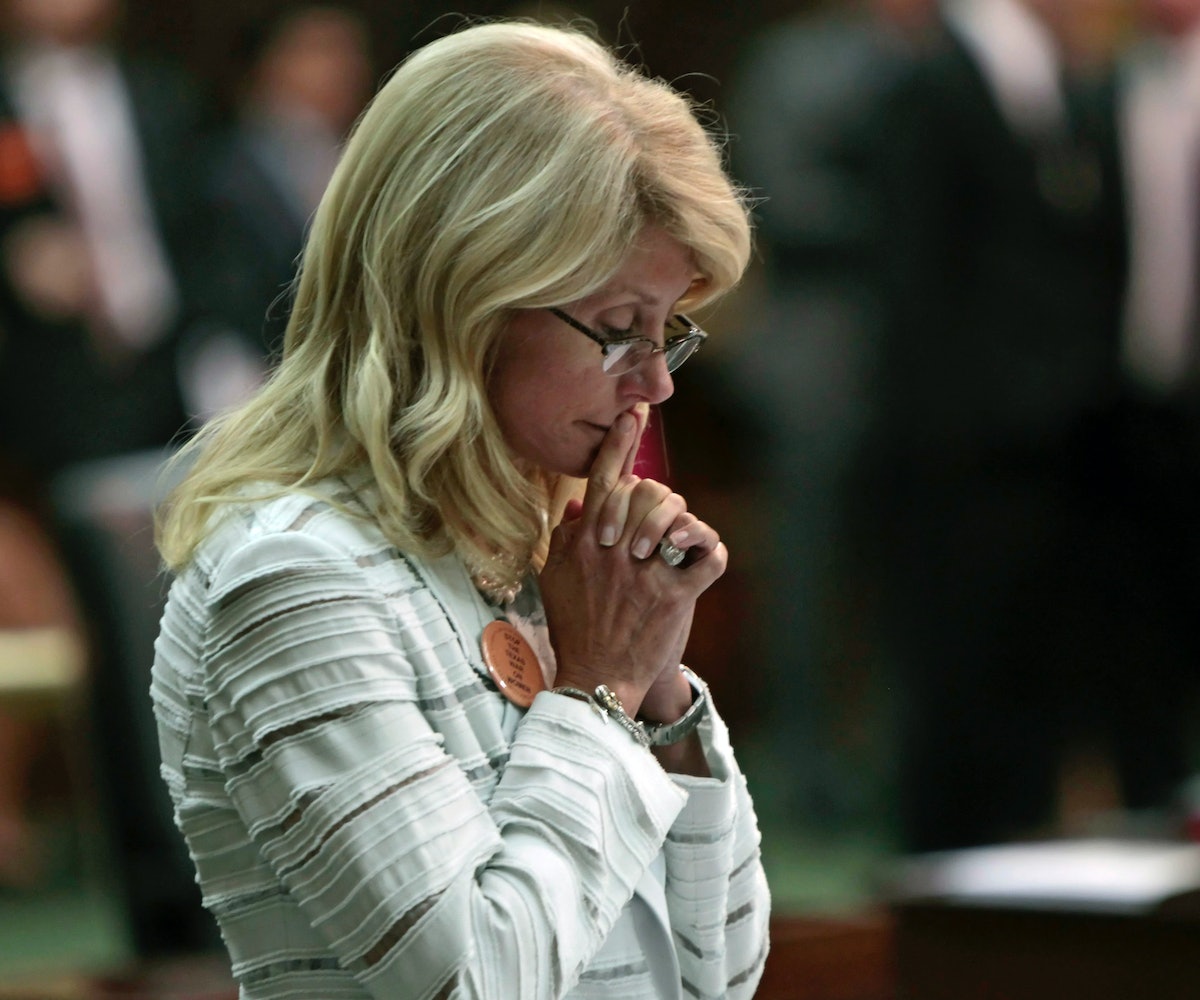 I first heard about Wendy Davis on my Facebook feed. I think of a lot of us did. “Have you heard about this Senator with the pink sneakers?” I asked friends at the time. “There’s an anti-abortion bill in Texas that she’s trying to stop, and she’s holding court until time runs out so they can’t pass it.”

In June 2013, that was all I knew. But since then, Wendy Davis and her 13-hour long filibuster have become truly iconic. The bill in question was written to restrict abortion access across Texas, shortening windows for when they can happen and effectively shutting down most clinics with new, difficult-to-implement rules. If it sounds familiar in 2016, that’s because the bill ultimately passed in Texas but went on to be fought at the Supreme Court this year.

There’s a reason “iconic” is used in connection to Davis. Growing up in Forth Worth, Texas, she hustled to the top. She gave birth and got divorced all by the time she was 19 years old. She went from being a single mom to becoming the first person in her family to graduate from college. After that, Davis went to Harvard Law School. During her second marriage, she had a second daughter—but also two abortions because of medical issues. Wendy Davis has no lack of stories to tell about why abortion access is vital.

So when Senator Davis took the Senate floor in 2013, in pink sneakers that conjured up references to both Planned Parenthood and feminine power, women across the country saw so much more than a filibuster. The best movements have a deeply personal story attached to them—and better yet, a symbol. Wendy’s got it all.

Now, she is harnessing that energy for a movement of her own making. Davis is launching Deeds Not Words this month, an organization helping young women turn their interests into actions. In addition to a newsletter with curated stories, they’ll host a digital hub where you can find organizations working on issues you care about, events, and even other community members to chat with. In their first year, the Deeds Not Words team is working with 10 college campuses on projects of the students’ choosing.

I was lucky enough to chat with Wendy about Deeds Not Words, get some life advice on how to rule a room, and even get the download on those darn sneakers.

The energy of Deeds Not Words feels different than your average organization. What gap do you see this movement filling?It wasn’t something I defined. It was the answer to a question that I get from young women everywhere I go. Young women who are passionate, intelligent, and who want to make a difference in the world, but who don’t really know how to move their passion into action. So often I get asked, “What do we do?” This is my answer to that, my way of saying, “here are some ideas.” Now, obviously, I can’t profess to be providing every great idea in terms of how a young woman could become active, but we certainly will be giving them ways they can plug in and sharing initiatives that we care about.

The phrase itself, “Deeds Not Words,” is pretty bold. Thinking back with #StandWithWendy, was there a frustration there at the amount of words in support of your fight in Texas without actual deeds to back them up?There’s a lot of talk about "hashtag inactivism," the pervasive conversation that takes place on social media that begins and ends with a conversation. That conversation is unbelievably important, and I don’t want to downplay it for a second. I think the support in Texas highlights how hashtag conversation can be a very important part of creating a concrete action. #StandWithWendy created awareness, it enlightened people to what was going on in our state, and it had a fast-growing, engaged audience.

But the reason that it made a difference wasn’t that it created a heightened sense of awareness, but that many of the people who became aware of what was going on made a pilgrimage to the capitol and decided to play a role in doing something about it. And what was extraordinary about that day and the thousands of people who showed up to participate was that their voices coming together at the end of the day—15 minutes before midnight—made the difference and successfully moved that bill past the midnight deadline. They literally rose and screamed out with all their might against what they saw as an injustice. I think it’s such a beautiful example of how we can use online conversation to inform, to engage, and also to turn out to make a difference.

It seems like this election especially has been very divisive online. I know you’re a Clinton supporter, are you discouraged by the “Bernie bros”?I’d be the last person to throw cold water on a spirited conversation. There’s value in that. But if we perceive that some of the criticism of a candidate is based upon a misogynistic perspective, I think there’s value in putting that out. That’s fair game, and I’ve seen that happening in a fairly robust way on social media. That’s the kind of conversation that social media provides the opportunity to have, which is: “You’re entitled to your opinion but I’m also entitled to disagree with it, and here’s why”. So I’m encouraged by the fact that I see the push and pull—that’s a natural part of a democracy and the conversation that should take place in a democracy.

I support Hillary Clinton, and I have been disappointed at the level of a variety of outlets that have viewed her and talked about her through a misogynistic lens. But that’s the reality of our world. Our responsibility, of course, is to call it out, to claim it when we see it, and to make sure that we’re pushing back on it when we perceive that a candidate is being targeted unfairly, whether it’s Hillary Clinton on the Democratic side or when it’s Sarah Palin on the Republican side. It’s our responsibility to call out that misogyny and to invite people to consider and critique candidates based on their platforms and their performances rather than the fact that they’re female.

It can be hard as a woman to call those things out, in real life and online. I’m reminded quite often that during your filibuster you were quite literally a woman holding her own in a room full of scowling men. What advice would you give to young women who feel that way online - like they’re a Wendy Davis in a room of scowling men?I know it can be really intimidating and hard, and it can feel kind of scary sometimes. The way that I manage it and what I would suggest for young women to do as well, to the extent that they can, is to tune out the negative and to stay true to their purpose-driven methods. Show that we won’t be silenced by intimidation or harassment, because what we’re working on matters so much more than that.

I’ve become pretty skilled at ignoring the noise. But you have to be purposeful about that. You have to be disciplined and not read through the comment string, decide that you’re going to speak about the things that matter to you and you’re going to do it no matter whether someone disagrees with you, and not shy away or be silenced because someone bullies you online. When we allow that to quiet us, then we have fed it and we have empowered it. The most important way to disempower it is to ignore that it even exists.

That sounds great, but also exhausting. How do you balance that fight with inspiration... and fun?I get really excited about the opportunity to weigh in and make a difference, so it doesn’t feel exhausting to me. I think we also have to be really thoughtful about taking time out, unplugging, spending time with family, getting outside, exercising our minds and our bodies in other ways, and that will keep us grounded in place. Don’t take yourself too seriously. Work hard, and work on the things that matter to you.

I know that the office would be furious if I didn’t ask you about the sneakers. Where are they from and where are they now?So those are Mizuno Wave Rider running shoes and they’re the running shoes that I’ve been wearing for, gosh, a good 20 years. I bought them at Luke’s Running Store in Austin. I just so happened to have that pink pair because that was the only color that they had available in my size. I brought them, of course, with me on the day of the filibuster—almost as an afterthought. They really were my running shoes and I certainly wouldn’t purposely take pink running shoes for the day, but it turned out to be, I guess, a fortunate happenstance because they became so symbolic of what we were fighting for that day. They are tucked away in storage right now and it’s my hope that they will be something that I’ll pass down to my granddaughter, who is going to be here any day now. My daughter is due with her next week, so, really excited about that.

Oh my goodness, congratulations!Thank you!

It’s wise they’re in storage. I’d been wondering, do they have their own room? Do they sleep in a bed? They’ve become a pop culture fixture—they even made it to a Parks and Recreation episode.I loved that episode. In fact, I worked and worked to get Amy Poehler’s email address and had a little bit of an email communication back and forth with her about that. I just loved it.

To girls reading this, what would you say to someone who’s just getting started and being politically active—at the tweeting stage?First I’d say, congratulations on engaging. Thank you for being a thoughtful human being who is considering a broad variety of issues and why you ought to care about them. And then I would encourage that next step, however small it is, of engagement. That next step might be, if you’re 18 or older, registering to vote and showing up to vote. It might be writing a letter to a Congressperson or State Representative about something that you agree or disagree with. It might be showing up for a rally. It can take a million different forms, but it should take a form. So, my encouragement would be stay engaged, but take a step, too. Do a deed and be a changemaker.