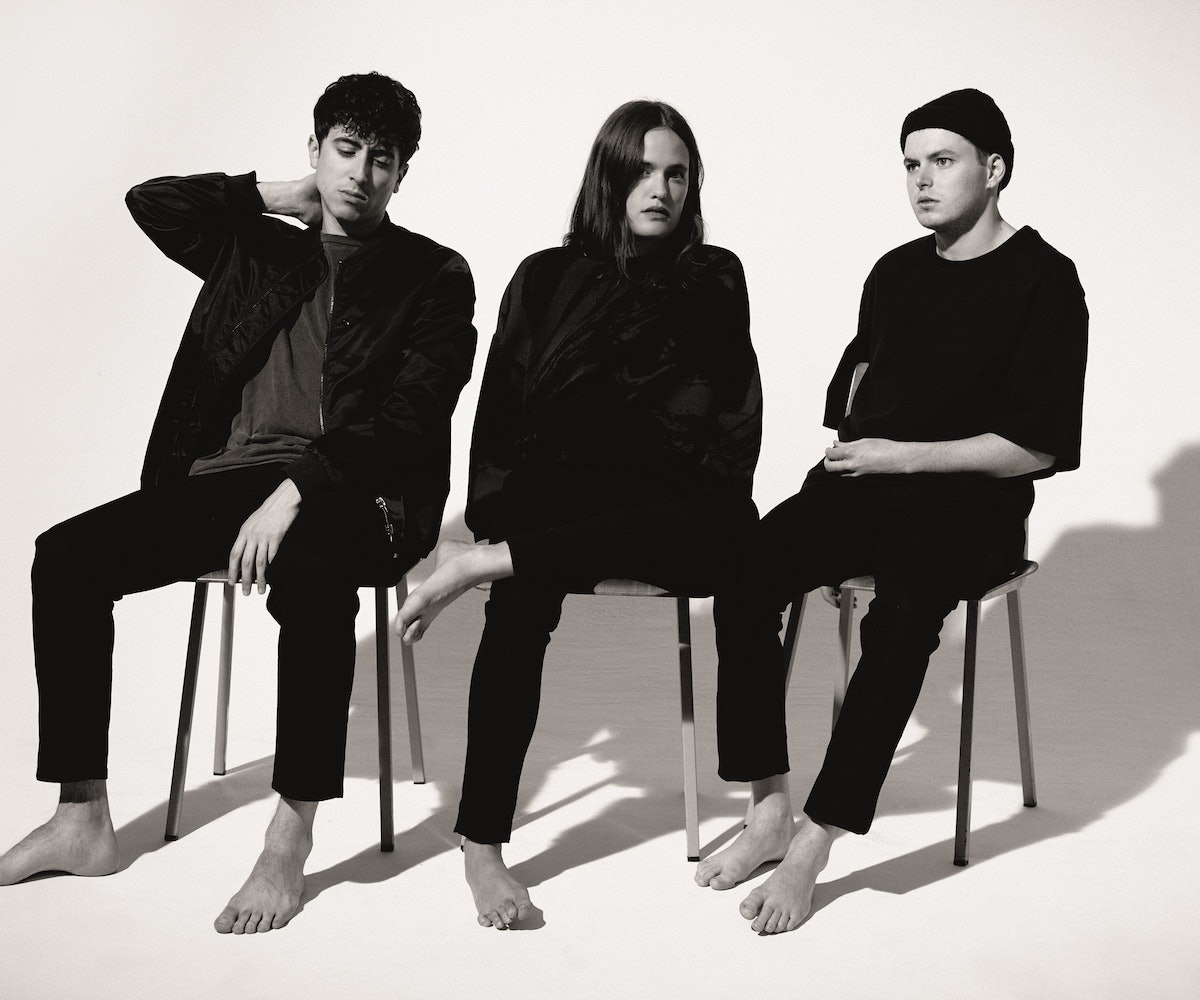 From start to finish, a Wet concert doesn’t exactly match the mellow, soothing sound for which the band is known. Their opening artist, electric tycoon Demo Taped, is wildly energetic, and when Wet hits the stage and starts into their first song, the audience is met with a light show that wouldn't be out of place at an EDM festival.

is an 11-track love song for the broken hearted. Lead singer, Kelly Zutrau, croons in such an intimate, lovely, and personal manner that you’d think she somehow snuck her way into your diary and knew all the different ways in which you hurt.

Ahead of the band’s final tour stop in New York, we sat down with Zutrau, who’s just as modest and soft-spoken as her music makes her out to be. Read ahead as she talks about being empowered to make music on her own, what she hopes to change with her second album, and how art and music coexist.

This is the last stop on your tour, and you're in your home city. What's it like playing your last show here?

It's exciting. It's really exciting. I went to Cooper Union [School of Art], so I walked by this venue a million times, and it's always been such an institution in New York. To be headlining and have it be sold out, I feel really, really grateful and happy to be here. And it's nice to be home. It was a really long tour, and just so much stuff happened, like Trump getting elected, that it feels really good to be home.

I read somewhere that you're not the biggest fan of touring. What turns you off the most about it?

I'm definitely getting better at it; I hated it when we first started. Now I'd say I only hate it like a third of the time and the rest of the time it's really fun. I just get really sort of disoriented and exhausted from not sleeping in the same place every night, and just constantly moving, and you don't really have a lot of time to think about what you're eating or how much you're sleeping. It’s hard to take care of yourself, and I'm just kind of sensitive, and I just get sick and tired and depressed really quickly on tour… You're living out of a bag; you don't have clean clothes ever. But, it's also really fun—it's both. There are moments where you're like, "This is so cool that this is my job, this is so fun. I'm like gonna take a trip all the time." But then there are moments where you just feel really exhausted, and you want to be alone, and you don't want to see the people you're with. It just takes a little while to adjust to that lifestyle, and it's definitely getting better.

Now that you're home, what are you most looking forward to doing?

Well, the last two days we've been home and I've enjoyed my morning coffee routine so much more than I did before I left. It just feels so nice to wake up and be by myself and go for a walk and get coffee, and then sit down and do some work at my desk. I think I do best with a routine, so I'm really happy to get back to that.

I know that you went to the Rhode Island School of Design, do you think you would go into art or teach if you weren't singing?

Yeah, I think so. I think I still will for sure; it's something I think a lot about, how to balance both, because I care about teaching a lot. And it's funny, last week with the election, I had the thought where I was like, "Maybe it's time for me to go back to teaching" because it feels really important right now. I just had this feeling of "Is what we're doing important when this is going on? When something this crazy is happening in this country and in the world?" And actually, since the election, the shows have been so amazing. It has felt really special to be in a room with people that want to be there, despite the state of things right now. But I definitely have been thinking a lot about teaching, or politics, or something where I can more directly contribute and influence the way things are moving.

I also feel like concerts are good for people who are going through things because they act as an escape, even if it's only for a couple of hours.

Totally, totally. And that's what people keep saying. It's like an hour to not think about this and to just focus in on something and to be with a group of people that care about the same thing, and that is really important right now I think. So maybe there's a way to do both.

Do you think that art and songwriting influence each other in any way?

Yeah, I think what I learned in school about my practice, and what I need to be successful at, is that I need to be doing at it all the time, even when I don't want to be doing it. Like, wake up and write or wake up first thing and go to my studio and work on a painting. If I slow down, I can really fall out of it. There are other similarities, too, that carry over, like having a good work environment—a clean space or organized space really makes a difference. And that's something in teaching, too. I remember really trying to get that through to young kids: Even organizing your space can really make a lot more room for ideas and stuff.

I worked on a story the other day about what authors listen to when they write. When you write, do you listen to any background music at all? Or is it just, like, you and your words?

Usually, I'll be at the piano or have the autoharp with me, so I'll be going from the page or the computer back to the instrument, so usually I'm not listening to music. But if I'm not at home listening to my own music, I'll have demos that aren't done, and I'll be listening and just kind of writing words that sound good to me, or feel like they fit. But when I'm just thinking, if I'm not writing but getting ready to or cleaning up my workspace, I'll often listen to classical music. Recently, I've been listening to Erik Satie, who's a classical composer who really gets me in the zone.

You performed your first solo performance in August, what was that like?

It was really cool. It was sort of like what I was just talking about: It felt really good to get to the basics of the songs, and, like, do they hold up as songs when it's just me playing autoharp and singing? There was also a cellist and a violinist, but it was pretty stripped down, and it was a really powerful experience for me. It was also kind of amazing to be on a stage alone and have total control over it. I curated the whole space and showed the string players what I wanted them to lay. It was just an empowering situation for me, 'cause I've always relied on other people, particularly men, to play shows or do stuff in music, and I'm really trying to get to the point where I can work on my own. Not that I don't want to continue working with the boys, but I want to feel like I can just not, just so I can feel empowered as an artist and a musician. I think it is really difficult for women, too. I think we're often put in a position where we are having to rely on men, in music and probably in every other fucking sphere of the world. And there's a reason. It's not because we're not as good, it's because there are systems in place to do that. And so I'm really trying to get to the point where I can make all my music myself. And that won't stop me from collaborating with men or other people, but I think it will make me much more empowered when I do, so that's what I'm trying.

I know that R&B influences you a lot…

A lot of media that has talked about us has talked about that, and it's definitely true, but we're equally influenced by country and indie rock. In the '90s I was listening to R&B as a kid, but really just what was on the radio, like Destiny's Child and SWV and Usher, and I love that music, and it has a special place in my heart. I think it's the best-sounding music that exists, just like soft and sweet. But then in high school, I listened to a lot more indie rock bands, basically, and then in college more country and classic rock. And now I listen to all of that, and classical too, I guess? So, I'd say we pull from all of those equally, and with this next album, one goal is that no one hears the album and is like, "Oh, that sounds like '90s R&B," or "Oh, that sounds like exactly like this country singer." I would like it to sound like its own thing. I mean, that's everyone's goal, but I'm hoping that it will really have it, make its own sound, space.

How far along are you?

I'd say I have maybe three-quarters of the songs are written. I need a couple more months of writing, and then we'll go into a studio and start recording.

Yeah, I think the writing part of it is the really fun part of the music industry for me because it's solitary and you can just sort of do it wherever you want and on your own time. So, I definitely would love to write for other people. I've written a bunch of songs that I've given to our publisher, Universal, to give to other people, and nothing has come out yet. But there are some things in the works, and hopefully next year, some things will come out.

Do you have a dream artist that you'd want to write for?

I'm gonna say Rihanna, but that's what every single person would say. But, if I'm being honest with myself, if there was any person that I would want to sing a song I wrote, it would be Beyoncé or Rihanna. I think they're the most talented performers and artists that exist right now.