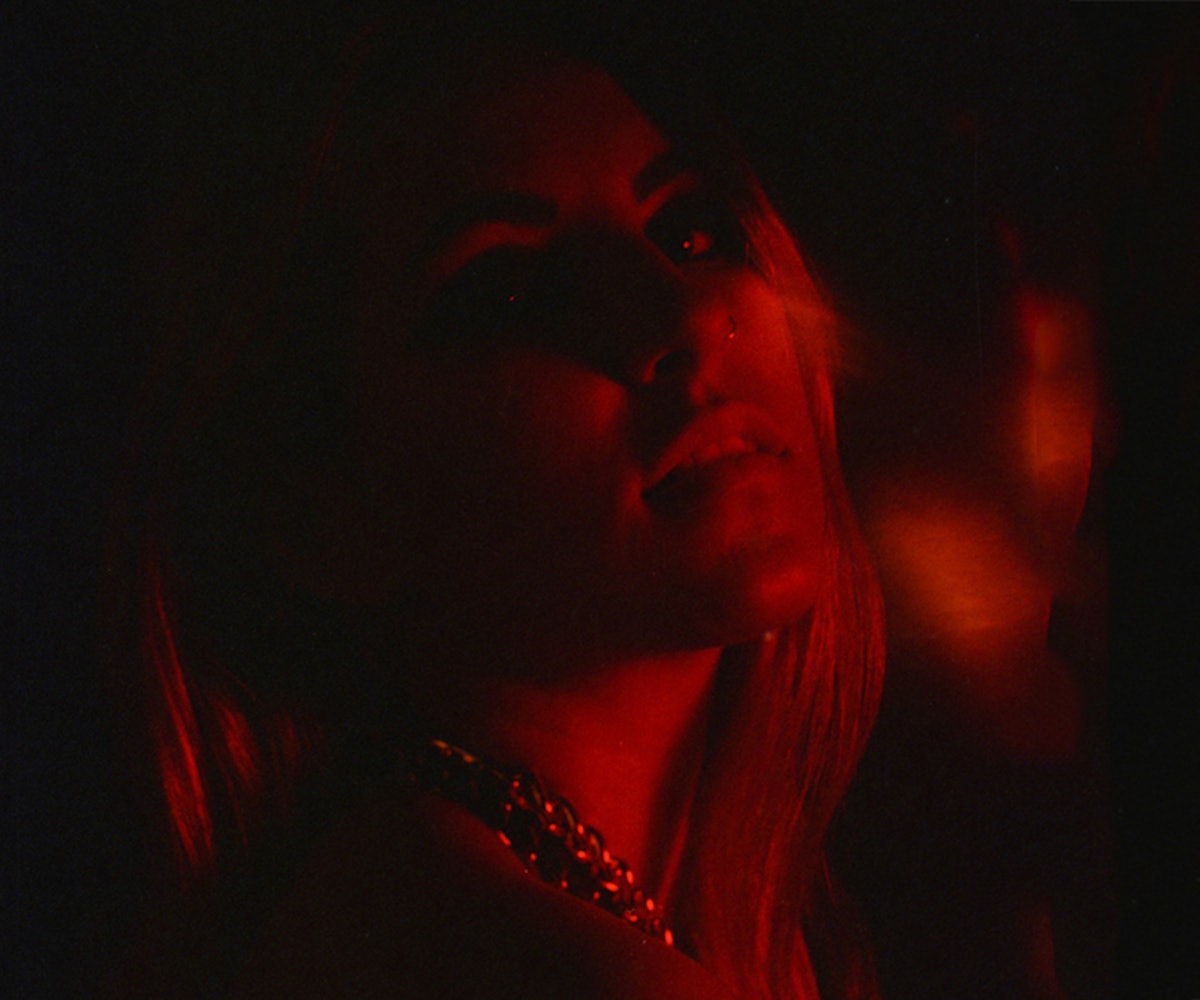 After four months of being immersed in the electronic soundscapes of Berlin, and years of making music in the basement of her New York apartment, rising musician Von has released her first single, “Action,” which was made using her own orgasm wave patterns. The song, which talks about the intimacy of having a sexual relationship with oneself, was made by Von completely on her own; she did all of the writing, producing, performing, and engineering herself. To create the track, she used technology from sex tech company, The Lioness, which captures wave pattern data via an iOS app that the artist then reprogrammed as sound waves. The track was not only a completely DIY effort, but it also speaks to the empowerment that comes along with getting the job done yourself.

We spoke to Von about the inspiration behind her debut song, her process for making the track, and what she hopes people will take away from listening to “Action.”

When did you first start making music and how has your sound evolved over time?

I started making my own music about five years ago. For the longest time, I was stressed out about figuring out what “my sound” was. But I firmly believe that you can’t completely decide that for yourself. A lot of the art-making process is rooted in your subconscious, which is super-frustrating when what you want to make is one thing and what comes out of you is another. It wasn’t until I was pumping out tens to hundreds of songs and listening to them all back that I realized, Oh, this finally sounds like they're made by the same person!

I’ve always been drawn to music that marries more intense, hard-hitting production elements with sweeter, catchy top-lines. I see how that directly correlates in how I define my own sound now. I’ve spent so much time making so much music just for myself, which sometimes felt really unproductive. But doing so made me confident and sure of what my “sound” was, which is why now I feel so ready to give my music to other people for their own interpretation.

Tell us about the journey of this song. What inspired this track? How did you come up with the idea to use The Lioness to make music?

Oh boy... I owe a lot to all the orgasms I’ve faked for inspiring “Action” [laughs]. It started out as an idea to write a love song to my vibrator, but kind of evolved into just writing a love song to myself, or I guess my version of a love song. I was like, you know what, some of the best orgasms I’ve ever had were completely solo. I’m gonna gas myself up in this! "I need solo satisfaction, don’t need you to make it happen” was a line I started with and then the rest of the song just kind of went from there.

I was joking around with a friend about how me and vibrators have a lot in common, we’re both super-efficient, we both value productivity, and we're both super-DIY. I was just messing around and said, “I’m gonna make music with vibrators one day.” I started reaching out to different sex tech companies asking if they’d be willing to give me the data for the vibration patterns they use. After a lot of companies couldn’t do that I came across Lioness and saw that they were able to deliver a wave pattern of your own contractions to an iOS app. I immediately reached out to Liz and the Lioness team and explained that I wanted to use their product to make music with my own orgasms. They couldn’t have been more down to help me. I got The Lioness the next week and shortly after inputted a bunch of my wave patterns into Serum and began crafting the production for “Action.” The song was done a few days later.

What was the process for making the track? Take us through step-by-step, and the emotions that came along with that.

I had the first two lines of the chorus and was just going through a bunch of stripped-down sessions to see if I could fit them over anything. I came across a really simple drum track that worked and wrote the song in a few hours. Then I just had the top-line over drums. I put the song aside for a bit, and once Lioness got back to me, I knew this was the right song to try using my own orgasm wave patterns in. After a session with The Lioness, I connected the vibrator via Bluetooth to an iOS app on my phone. Then I took a screenshot of the waveform from the session and inputted the wave into Serum. Once the waveform was in Serum, I mapped an LFO to the wave table position so that every time I hit a note, the entire waveform would playback. Then I manipulated the sound's envelope and other wave characteristics to shape the desired bass sound I wanted. After the bass sound was how I wanted [it], I started honing in on the production elements to finish the song.

I think, for me, writing “Action” was a symbol of a bar I was setting for myself. It was my way of expressing that I was no longer going to settle for people who didn’t respect my body, or care enough to ask what my needs were and fulfill them. It was very much a public declaration of something I had already decided for myself, which felt fulfilling, empowering, and just.

What do you hope listeners will take away from hearing this song, and learning that it was made using your own orgasm waves?

How can we use music to foster female empowerment and sex-positive dialogues?

By talking about sex openly, in a manner that is honest and unashamed. By seeing that there are women out there who do everything on their own because they can. By seeing that there are overqualified female producers making better tracks than male producers in their spotlight. By showing that women can be open about their sexualities and still have complete agency over their bodies.

You write, produce, perform, engineer, and mix all of your own material. Why is working independently important to you?

I wouldn’t say it’s working independently that’s most important to me but rather self-sufficiency. For a long time, I made excuses- I couldn’t finish songs because I wasn’t a songwriter. I couldn’t cut demos because I didn’t sing. I couldn’t have my mixes done in time because the mixing engineer was busy. I had so many ideas and made endless excuses for not finishing them that were all based on other people’s abilities or lack thereof. I started doing everything myself mainly as a way to efficiently get things done. Let me also be frank though and add that I’m in an incredibly privileged position to study recorded music in college. I’ve never taken that for granted, and have chosen to take full advantage of everything I’m privileged enough to have access to. The way I became my own songwriter, producer, engineer etc. was plain and simple: I didn’t have the time or money to keep depending on other people, so I worked really fucking hard to not have to. Collaboration is one of the most fulfilling parts of being a creative person, but there’s a difference between choosing to do things on your own and not having the ability to.

What's next for you? Do you plan to continue using this system to make music? How do you hope to expand upon this practice?

Since teaming up with Lioness, I’ve produced around 10-plus tracks that are crafted with my own orgasm wave patterns. I’ve always loved making my own sounds that are singular to me, and using my own orgasms is about as singular as it gets. I think this is just gonna be my new method for making music.

How did growing up in a small, traditional town with little access to sex education impact your own development and sexuality? How have you reclaimed that through your music?

I think, more than anything, it suffocated it. I grew up in a predominantly male household in a pretty traditional town. I remember having to wrap up my tampon wrappers before throwing them in the trash so that my brothers wouldn’t be grossed out, and being asked to cover up at the pool because I had boobs at a younger age than my friends. I remember friends’ moms, literally grown-ass women, calling me a slut because my shorts were too short when I was, like, 11. My sexuality was always something that was too “raunchy” or “showy” or “explicit” before I even knew what sexuality meant. I think that if I grew up in a space that valued sex education or sex-positive dialogue, I wouldn’t feel the need to be so outspoken about my sexuality now. But like with anything, when something is suppressed long enough it bubbles over. I finally hit a breaking point, and although making music that is so deliberately about sexuality is something I’m passionate about, it’s also definitely a direct response to that suppression.

Who are some of the musicians that have inspired you and what about their music do you like most?

Charli XCX, SOPHIE, Grimes, and Peaches are probably my biggest inspirations, both in what their music represents sonically and who they are as artists. I appreciate how blunt they are with their work—it’s very much: “Here’s what I make. If you like it great, if not then it’s not for you.” At the end of the day, not everyone’s gonna vibe with what you create, but they’ve found a way to make music that serves their fan base while also unapologetically making music for themselves. I think that’s really the ultimate dream for any artist: finding people who get you and your craft while also staying sane and giving back to yourself.

How would you define Sex Positive Synth Pop?

Sex Positive Synth Pop is pulsing percussion and sawtooth bass lines under glittery synth riffs and synthesized vocal treatments, that in message defines sexual confidence as what you always wish your misogynistic aunt read it as: powerful.

Is sex the future of music? How can we harness the power of sex and sexuality for making music?

I think sex tech is the future, period. The entire idea of sex tech being progressive is almost funny when you really think about it—people have been having sex/sexual preferences/sexual identities since the beginning of time. It’s a fundamental human instinct, yet for so long advancements around sex and human sexuality, literally anywhere other than behind closed doors, have been so stifled and shamed. Sex tech is the future, but it’s also a sign of what has always been—humans having a sexuality. I think the more people use their platforms to talk about sex in an open and honest manner, the better off we are for teaching future generations the importance of knowing your body, being vocal, and demanding respect in sexual circumstances. Although my platform is small, if I can use it to do the same thing, then I feel like I’m doing my job.

Male musicians and rappers have been notorious for making music about sex that objectifies women or is misogynistic, but your music feels like a protest against that. Can you speak to this more?

I hope that my music encourages people to speak freely about their sexualities in ways that are empowering and self-fulfilling. I hope that more artists who have a mission like mine can drown out others who choose to use art to objectify women or spread misogynistic dialogue.