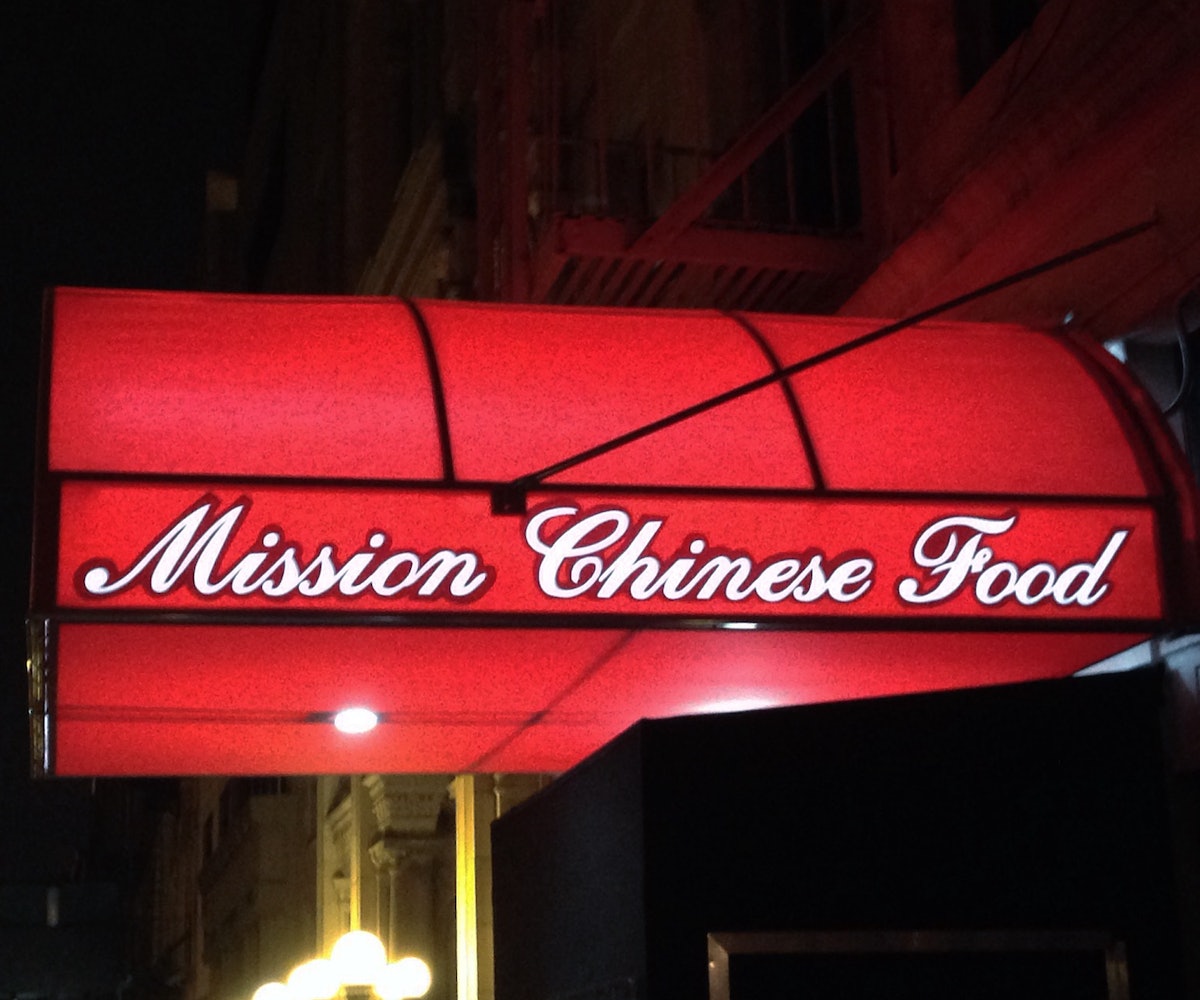 New York's wackiest Chinese restaurant is back and better than ever.

Over the last year, Danny Bowien lived through a nightmare that very few chefs have had to endure. At top of his game with one of the most popular restaurants in New York, Bowien was forced to abruptly close his Lower East Side outpost of Mission Chinese Food after a mouse infestation forced the Health Department to drop the hammer. Instead of doing battle with his unwanted neighbors, Bowien, whose first Mission Chinese in his native San Francisco made him a star, abandoned ship and instead focused on Mission Cantina up the block, leaving New Yorkers to wonder if they'd ever taste his Kung Pao Pastrami again.

That question was officially answered last weekend when Bowien—who opened a Mission Chinese pop-up over the summer—opened his new permanent Mission Chinese location at 171 East Broadway in the old Rosette space. By all accounts the 32-year-old chef has not messed with success—waits at the old Mission Chinese often ran longer than two hours--bringing back old favorites like his thrice-cooked bacon and salt cod fried rice—but according to a friend who was there on night two, there are some significant changes, like a wood fire oven that's making...pizzas. Here's their take on the new space, the new menu, and the new beginning.

How is this different from the old mission chinese (assuming you've been there)?I can't speak to the difference between the old nyc Mission Chinese because I never made it there but in comparison to the San Fran Mission Chinese it's definitely elevated. From what I know of the previous NYC Mission Chinese (from what my BF has told me) this one is fancier and probably three times the size. Plus there's a new and killer cocktail menu.

Does the restaurant seem fancier than before?From what I know yes. The menu has expanded a bit. All the old favorites are there but with some new additions. Market Price gems like 6 crab legs for 32$ and a pizza which I'm guessing is made in the wood burning pizza oven in the front kitchen that is open to the front bar.

Is this still the same Mission Chinese everyone knows and loves or is it different?I would say it's had a pimp my ride-like transformation. It still has the soul you know and love but now you can indulge in a mind blowing high-end cocktail while sitting in a stunning space with exposed original brick arches that look down onto a lower level bar with a silver emergency room blanket wall installation that crawls up the ceiling. The juxtaposition of high-end and straight up is there and the hipster grit is gone.

How big is it? Did you have to wait long for a table?We had a happy accident noticing that the Mission Chinese instagram had posted the reopening the previous night. We were in the area and walked by at 5:20pm and there was a small line of about 10 people waiting for the restaurant to open it's doors for 5:30pm. At just after 5:30pm they opened the doors and sat us all right away. When we were leaving there was a collection of people waiting in the front bar for tables.

The space is made up of a front bar area that has a middle patrician and lots of stools as well as a small front sitting area. The main dining space probably seats 50 or 60 people. There is also a downstairs bar with stools and plenty of standing area that looks like it would be full with 40 people. I happened to notice a sign when we first entered that said maximum capacity 150 patrons.

How would you describe the atmosphere?Old New York high-end Chinese restaurant with a smear of Brooklyn nostalgia and and a dash of contemporary art quirk. Spectacular lighting. The level of light is exactly right and the hue is warm without a distorted sway of too much red, magenta or yellow. Most of the fixtures were small brass and minimal geometric forms. The table cloths on the middle round table and the cloth napkins throughout the restaurant are China Chalet pink, that baby pink that is iconic Chinese restaurant. Some of the staff had aprons in that same light pink. The music was good, not great, and could have been louder. It weaved in and out from Fleetwood Mac's Gypsy to O.T Genasis' CoCo (I shit you not that transition occurred).

What were some of the new/standout dishes?The pizza. We didn't order it but our dining neighbor did. It's personal sized and I'm pretty sure it was made in the front room wood burring oven. The menu can be found here. Danny Bowien brought the pizza out himself and said that "They were really proud" of that dish in particular.

NEXT UP
Culture
In Cann’s Holiday Campaign, The Greatest Gift Is Being Chill
Culture
NYLON Party Report Card: Partying With The Stars & 94 Foot Long Whale At The Natural History Museum Gala
Culture
10 Luxurious Gifts For Your Bougiest Friend
The Art Issue 2022
True Life: My Partner Is Obsessed With NFTs