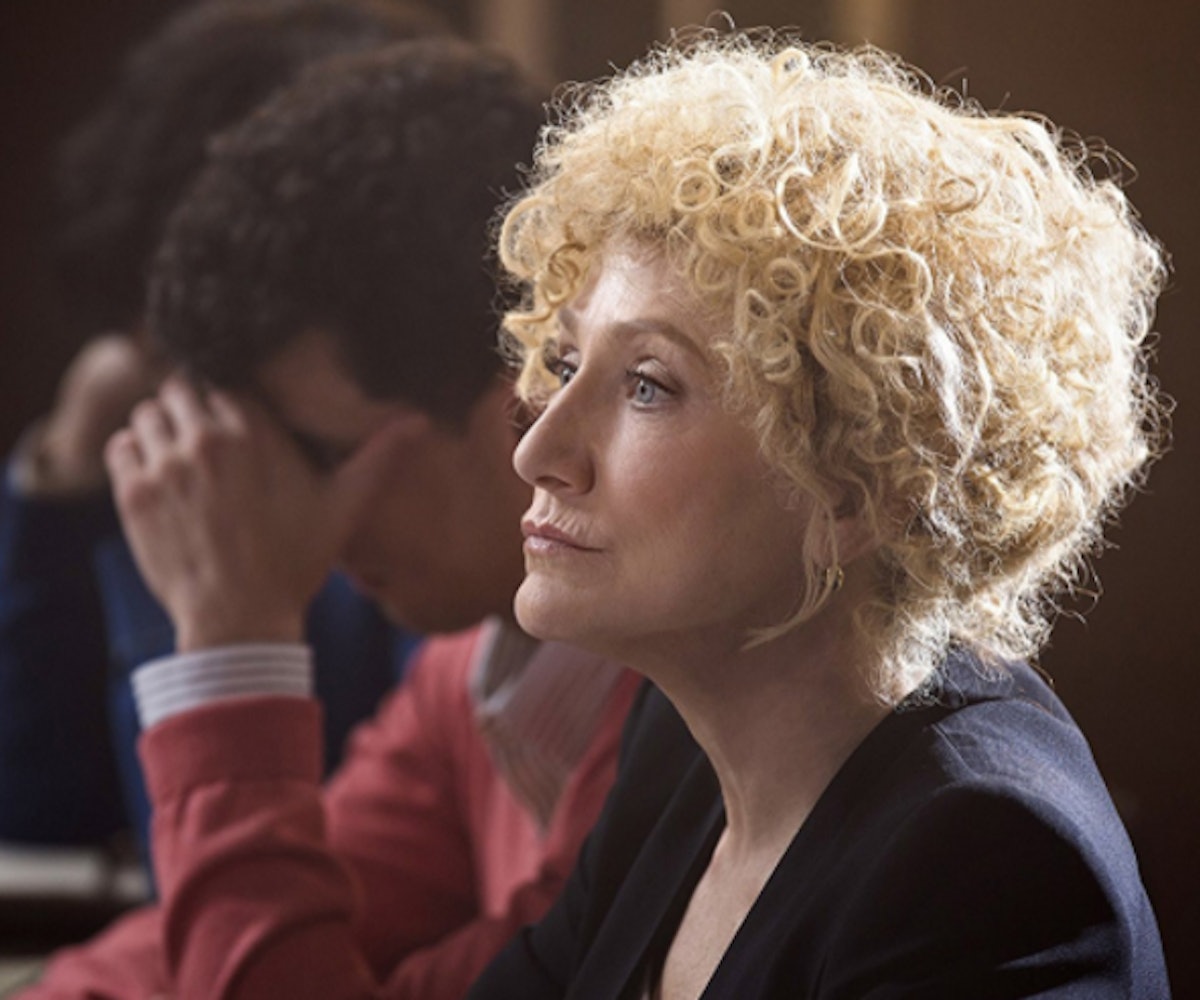 This week, NBC premiered its answer to last year’s American Crime Story: The People vs. O.J. Simpson via Law & Order True Crime: The Menendez Murders. Revolving around the 1989 killings of Jose and Kitty Menendez at the hands of their sons, Lyle and Erik, the series stars Edie Falco as defense attorney Leslie Abramson, Josh Charles as Erik’s therapist, and Gus Halper and Miles Gaston Villanueva as the brothers. So far, it is dramatic, well-acted, and exactly what you can come to expect from the Dick Wolf franchise decades after the premiere of Law & Order’s original series. And yet, it has me asking: Is there something inherently exploitative about dramatizing true crime for the sake of entertainment?

For anyone who grew up watching Unsolved Mysteries, Forensic Files, or Exhibit A (a mainstay of Canadian programming), real events re-enacted by actors are a staple of true crime consumption. Typically, a narrator will speak over “character” dialogue, describing what happened and at the hands of whom, before the scene cuts to a talking head and the lead detective/forensic investigator/close family friend re-affirms what we just learned. Dramatics are in place for the sake of giving us, the audience, something to process tangibly: we physically see how a crime played out, and that allows us to understand it. It’s dramatic because of the story it tells, but also because we know this isn't just a "story." This really happened.

Yet, even though the narrative framework is already in place, true crime can be a tricky thing to navigate. While it’s a genre that’s existed since journalists began covering homicide, the recent boom in true crime content—whether via podcasts, TV series like Making a Murderer, or documentaries—has prompted reminders that, while killers are fascinating, their victims were real people. Or, even more importantly, that erasing the memories of victims to prioritize sensationalist storytelling is like killing them all over again. (Case in point: As entertaining as The Jinx was back in 2015, it mostly served as Robert Durst’s vehicle for storytelling, without much agency given to Kathleen McCormack Durst, who has been missing for decades, and Susan Berman and Morris Black, who were murdered.)

Which makes Law & Order’s newest installment complicated. On one hand, it’s a decent retelling of a murder and criminal case that transfixed America; at its core, it's a classic procedural drama. (And since Wolf invented procedural dramas, the show is in good hands.) But on the other, a scripted series defeats the purpose of true crime as a genre, particularly since the genre depends on research, investigations, and facts presented without characterization or an artistic vision. So while the show is well-done, it’s still a platform for actors and directors to tell a version of a story, instead of simply relaying the facts. And while biopics always tend to fall into the “based on a true story” camp, a TV production rooted in an honest retelling should be the true story.

So if Law & Order True Crime uses the Menendez murders as a platform for bigger discussions (as opposed to a step-by-step dramatization of the murders, interrogations, eventual confession, etc.), it could serve a purpose outside the realm of standard true crime recapping. In the same way FX's American Crime Story hinged on Jeffrey Toobin’s The Run of His Life: The People Vs. O.J. Simpson and fixated on the circumstances that led to Simpson’s 1995 acquittal (see: DA over-confidence, LAPD racism, OJ’s defense dream team), a focus on the literal law and order of the Menendez slayings can inspire discussions about the crime’s extenuating circumstances: alleged sexual abuse, notions of class, victims’ rights, and internalized anger.

Which is where dramatizations are useful. Where documentaries and podcasts tend to examine the specifics of the crime and the way it was solved, series like Law and Order: True Crime and American Crime Story can (and should) use creative space to bring our attention to the outliers. Wolf’s newest incarnation begins with a re-enactment of Lyle and Erik shooting their parents (shot in black-and-white and in slow-motion) but then brings us back to present day far less sensationally. Yes, the brothers are interrogated and exhibit low-key emotional reactions, but the series’ fixation stays largely on the case. And if it stays there, this means of dramatizing a tragedy can help us understand them even more.

Because that’s our whole draw to true crime, anyway. We absorb podcasts and books and TV specials in hopes of learning enough to tell ourselves we can't outsmart our crimes or to figure people out before they have the opportunity to hurt us. But when true crime is entirely dramatized, we begin to see killers and their victims as characters and forget that they were real people, which exploits victims’ experiences for the sake of our own entertainment. (Kind of the way Bonnie and Clyde became heroes after Warren Beatty and Faye Dunaway took them on, or how Goodfellas became its own cultural currency despite it being based on a non-fiction book.)

So if Law & Order True Crime continues to use actors as vehicles through which to analyze and rehash the circumstances that led the Menendez brothers to murder, the dramatization makes sense. But if the series (or others like it) simply presents itself as a means for actors to sign on to what they hope will be an award-winning role (a la Sarah Paulson), we true crime aficionados need to have a word with ourselves. Mainly: In what way has our increased consumption of the genre led to a place where our interest has expanded away from who, what, where, why, and how? And how do we come back from viewing killers and victims as the roles of a lifetime?