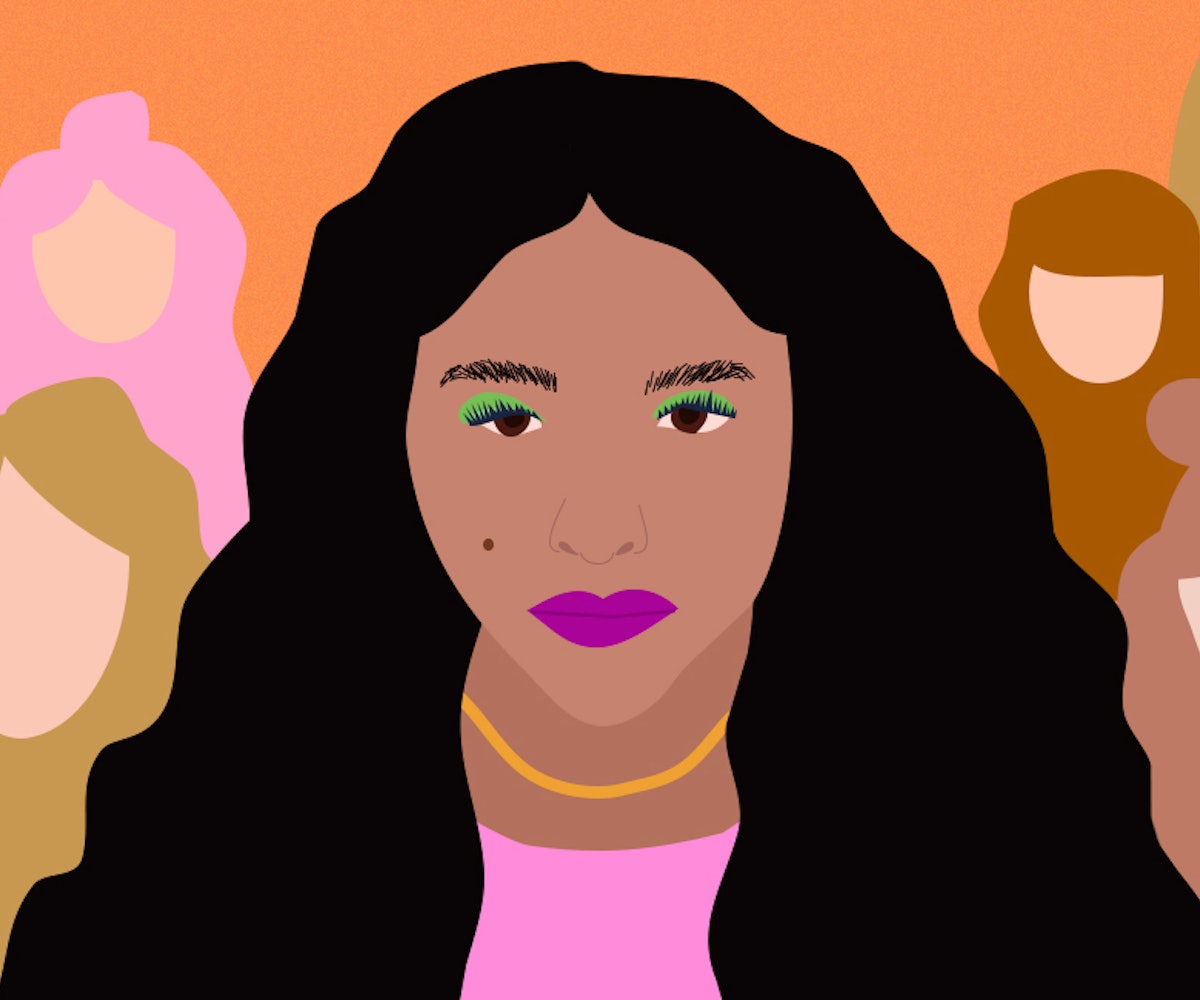 In Places and Faces, writers explore the ways in which the aesthetic peculiarities of the places where they grew up defined their sense of beauty as they move throughout the world. Below, Colombia-born Ingrid Rojas Contreras explores her relationship to the white gaze.

In Bogotá, Colombia, we were ashamed of how hairy our bodies were. Our hair grew out dark and thick from the follicles of our arms, legs, faces, stomachs, and scalp. There were some Colombian girls in our class who were born blonde and white. The fuzz on their arms was thin and golden and made their skin seem like it was aglow. Not us. Our black hairs made our already dark skin seem darker. The down covering our body made us seem like—but, no, we never finished that thought. It was ugly. That’s what we knew.

At 11 and 12 years old we were frequent hydrogen peroxide users. There was a box we could buy at the grocery store. It came with a foul-smelling paste and some powder you mixed in a small plastic cup. When the mixture was frothy and white, we applied it to our skin. It came with a tiny plastic knife. We spread the frothy white cream from our shoulders to our knuckles, from the edges of our hairline to our forehead and on our cheeks, and if there was any left over we applied the frothy white to our stomach too. The white cream tingled and itched. Our skin seared. For the eight minutes required, we ignored the smell of burning hair, and then we ran with relief to the bathroom to wash it all off. When we looked at the mirror again, we were less animal, less peasant, less native. The new golden hairs stood out on our dark skin. Then, I would hold my new golden arms under the sun. The yellow hairs created a halo of light. It only lasted for a couple weeks.

Everywhere we looked, on the television and in magazines, there were beautiful, long-legged blondes. Even our Colombian supermodels were light-skinned, and their hair fell limp against their shoulders. We ironed our wild hair with the clothing iron. We fanned it out on the ironing board and put a newspaper or a towel on top and then moved the hot heavy iron blindly over our heads.

No matter what we did, though, the boys in our class were always likening us to monkeys. The white girls, for their part, were fond of pointing out that if they themselves came from European blood, us brown girls were descended from Indian slaves.

There were a lot of things us girls were supposed to do to make our bodies presentable, and all of it, I gathered, was done in order to attract boys. I looked at the boys around me. They were not good-looking. They brought up phlegm to the back of their throats and spit constantly. They harassed each other in repugnant homophobic shaming rituals, pulling each other’s pants down or pretending to hump one another, saying, “You like that, maricón, you like that?” Sometimes, to pay us a compliment, they would zero in on one of our body parts. “That one has culo de reina,” they would say. “With a queen’s ass like that, who cares about the face.”

I didn’t see the point in going through such pains for boys like that. So I stopped applying peroxide to my face and arms, stopped using hot irons on my hair, stopped staying out of the sun in order to not get too dark. I wore big shirts and ripped jeans and did nothing to my hair and nothing to the hair on my arms. I was quiet, and sometimes when all the girls left and I stayed behind, the boys spoke to each other as if I wasn’t there. Or, rather, I was so far from beautiful, so far from being an actual girl, they treated me as if I were one of the boys. They teased one another: “I saw that hand of yours reaching down Leti’s ass, what, have you no respect?” “Respect, for what, papá—I know how to get what I want.” Once, after hosting a dance party in my house, which I often did, right after we had pushed each other in an impromptu mosh pit, the girls went out, and one boy said, “Okay, now that all the girls are gone, who is it the one that stinks, man? It smells like armpit in here. Have some respect for the ladies.” They all smelled themselves, then looked at me. I smelled myself, and laughed, then went up to the bathroom and washed out and put on deodorant, not wanting to disrespect any of the ladies.

When I first came to the U.S. as an exchange student for my senior year in high school in 2002, I was shocked to find out that American boys thought I was beautiful. “Exotic,” they called me. White girls approached me too: “You are so lucky. I have to tan so much to get your skin. Your skin is so naturally golden. And your hair is so thick. Mine just plops, it’s always straight.” I never knew what to say to this barrage of compliments that were also wrapped in self-criticism, partly because I could hear my Colombian classmates and myself complaining about how our skin was not light, and our hair not limp.

In a moment, or maybe through many moments over time, I understood that while the beauty standards of Colombia revolved around a burning desire for the European-looking, which belied wealth, status, elegance, and stability; in the North American continent, where European features were prominent and plenty, there was an attraction to the opposite: the tribal, the earthy, the wild, the animal. Beauty seemed then like an elaborate role-play where the history of the oppressed and the history of the oppressor met. Brown bodies were the battleground, either being coveted or erased. Under the white gaze that exoticized my brown skin and thick brows, I understood that measurements of beauty are universal—in that they are universally leveled against women.

That’s when I stopped giving a shit. It was liberating. I shaved when I felt like it. I let my armpit hair grow when I pleased. I coated my eyelids in bright purple, neon green, metallic blues. I wore blue mascara and clashing patterns. Fashion became an utterly expressive art. I started to demand space, demand good treatment, demand what I wanted when I wanted it. I set aside my embarrassment over having too many answers and raised my hand in class as many times as I pleased—something that I had been ridiculed for mercilessly in Colombia.

Today I favor thick eyeliner and leave my hair untouched and undyed. I love my white hairs. Some begin as white and end in black. Others are transparently white with a red glowing core. Some are completely silver and come out tensed in a tight spiral as if they came too close to a fire. The bulk of my hair is still jet black and thick. I shed a lot of hair, and I often spot stray hairs puncturing through the fabric of my cotton T-shirt as if they had been pulled through by a threading needle then left dangling.

At last, I find the whims of my body to be beautiful.