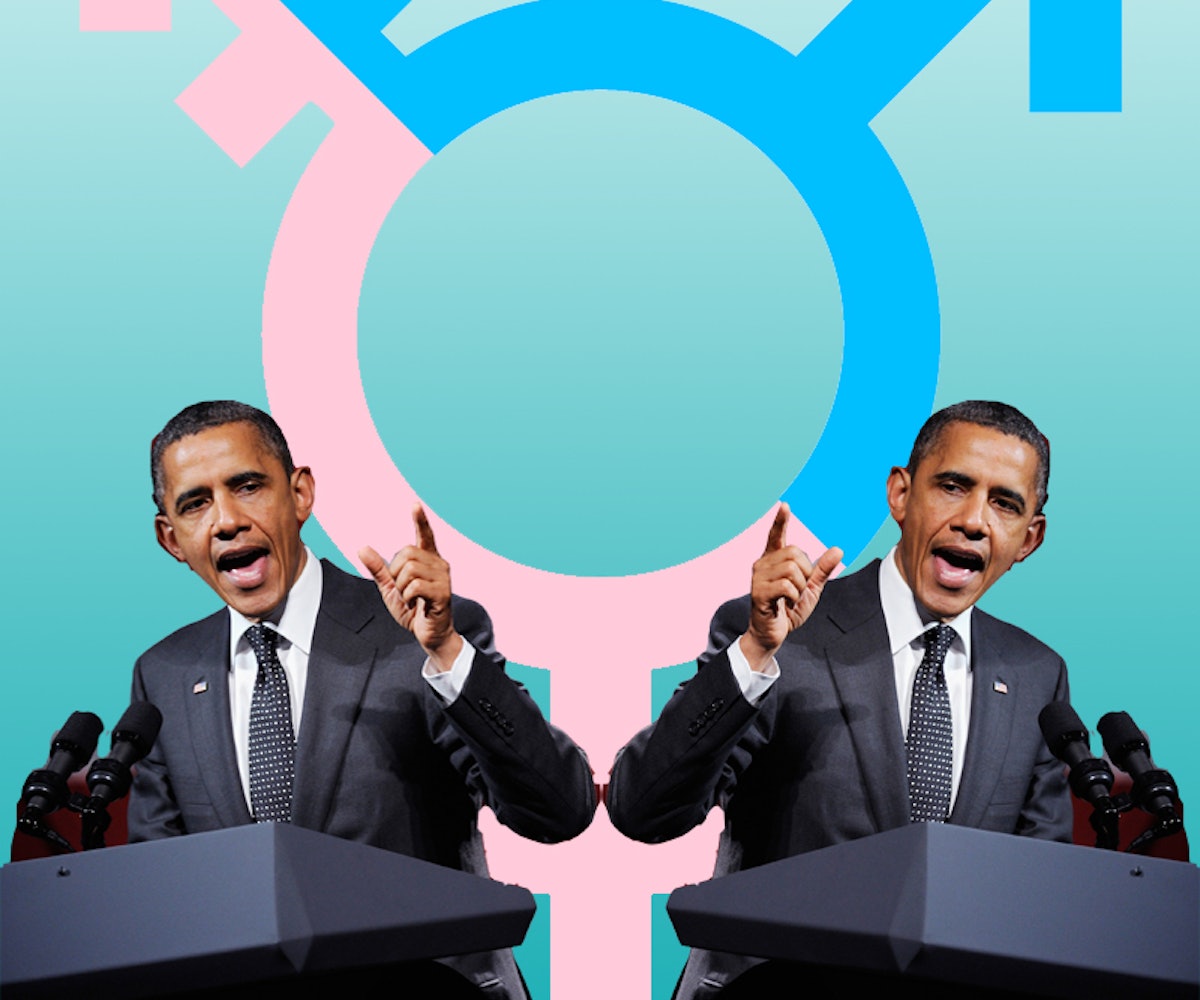 Photo by Kevork Djansezian/Getty Images
by Yasmeen Gharnit
May 14, 2016

Today, the White House issued a directive to protect trans students in public schools across the country. According to The Atlantic, the Obama administration sent a letter signed by Justice and Education department officials to school districts with detailed instructions on how to prevent students from being discriminated against and, among other things, order them to allow transgender students to use restrooms that match their gender identity. Refusal to do so, the letter reportedly claims, is a civil rights violation.

The letter also elucidates Title IX, which forbids sex-based discrimination from government-funded institutions, and reminds schools that gender identity discrimination is forbidden in housing, athletics, locker rooms, and at school events like graduation. It is the most informative document that schools have been given about transgender people. It includes instructions about pronoun usage and how to support students who are transitioning and prevent bullying. The initiative does not hold the same weight as a law, but it does threaten to bring lawsuits and less of federal aid to districts that do not abide by its specifications.

This comes after the Justice Department filed a lawsuit against North Carolina for its HB2 bill, which is a clear violation of transgender rights and equality. One of the most talked about aspects of the bill is how it requires transgender people to use bathrooms that don't correspond to their gender identity.

While this is a huge, necessary step for the rights of transgender individuals, it's simply not enough to protect them from discrimination and life-threatening situations.

"Obama is sending a very clear message about trans lives and our humanity, however I think this is happening in such a hyper-visible way that I worry about the response by many citizens in the United States," Basil Soper, a trans activist and writer who has worked to protect other trans students at North Carolina's Asheville-Buncombe Technical Community College after being threatened against by a male peer in a restroom, tells us. "While I am incredibly grateful and excited for Obama's directive and overall message, and I believe it's a good first step, it's not going to be beneficial if a student is outed in class and then put into the same restroom with people who are transphobic."

In order to foster a safe, nurturing environment, Soper suggests, more education and procedures need to be put in place. "There needs to be direction around using a student's proper pronouns, name, and gender on all course materials and in class with teachers. This way, they are streamlined into a school's microcosm. If nobody 'others' that student in any way and everyone uses the right language and name, then it will help keep the student from being vulnerable to others' judgment, hate, and well-intentioned but still very invasive questions. If a trans student is to succeed in school, then they need to be protected in such a way that nothing interferes with their learning."

Hopefully, the Obama administration will put more mechanisms in place soon. With rates of transgender homicide at an all-time high, it's imperative.