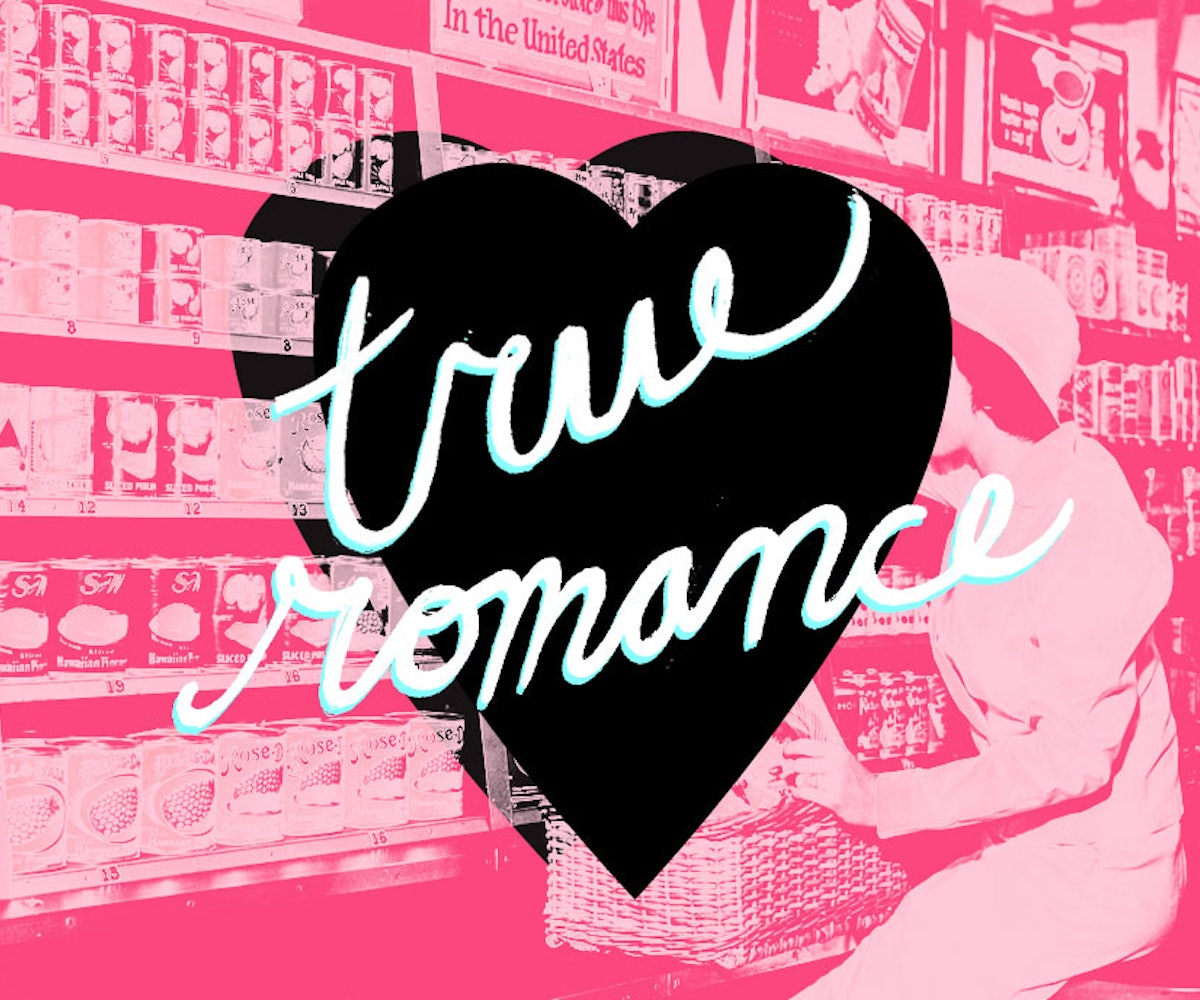 Welcome to True Romance, our brand-new series of awww-inducing love stories. Don't worry, though, these essays won't make you gag: We're all about the real talk when it comes to finding your person. Here, you'll find honest, funny, surprising, touching, moving stories—because at the end of the day, who doesn't want to talk about love?

That’s what I remember thinking as I checked out at the Columbus Circle Whole Foods in Manhattan on March 1st, 2006. I was seventeen years old, and grabbing lunch after an audition before heading back to my high school, which was a block away (yes, I was a teen actress…but that's a story for another day). It was two in the afternoon, and I was starving. I scanned the seating area to find a spot to inhale two large slabs of pizza and a small soup when my life changed forever.

A handsome stranger sat at a long communal table, bent over a salad, munching away. I remember that his wavy brown hair was slightly disheveled. Already, I was riveted. Yes, he was good-looking, but it was more than that. It was like there was a spotlight on him, and I was a moth drawn to the light.

In case I haven't already made it embarrassingly clear: I fell in love at first sight.

What's that you say? You don't think that love at first sight is a real thing? Well, neither did I. Despite the fact that I grew up as a boy-crazy romantic, but I wasn’t as naive about love as one might think. I had grown to understand that love was something cultivated over time; that love was beautiful but hard; something you worked for. Love didn’t fall in your lap in a Whole Foods one Wednesday as you stuffed your face with overpriced pizza. That would be crazy.

As I paid for my food, I debated whether I had the balls to go sit by this guy. For a minute, I doubted myself. Would I seem desperate? Was this outfit really lame? (There were Ugg boots involved.) I made a decision: I would go sit in the general vicinity of Handsome Stranger—at the other end of the table—and, I would ignore him. Genius!

I sat down, and demurely started sipping my soup—ignoring the two huge slices of pizza I had bought to go with them. I took out some light reading (from Earth Science class!) so I would seem very busy, and very intellectual. I ignored handsome stranger. And then...

Do you remember when Abercrombie and Fitch was in its heyday, and it would send sales associates around malls to find other young people to sell their special brand of moose-adorned sportswear and nausea-inducing cologne? Well, I'm afraid to say, the next step of my big love story is contingent on that very mecca of pseudo-preppy duds. A couple of A&F girls approached Handsome Stranger and told him that they liked his style. They asked if he wanted to work at the new Abercrombie and Fitch location on Fifth Avenue. He politely declined, stating that he was already gainfully employed (swoon!).

I was still pretending to be absorbed by my worksheet on rock formations, until the girls turned to me and asked if I might be interested in a job. "No thanks," I flippantly replied. "I'm a student and an actress."

The girls shrugged and giggled, and inexplicably said: "Well, now you two have something to talk about!"

Handsome Stranger turned to me and laughed, and admitted that he had, in fact, worked at an Abercrombie and Fitch in high school (in the stock room, so he didn't have to wear the clothes, he was quick to point out). We chatted. We laughed. I noticed that he had the deepest blue eyes that I had ever seen.

When he left, my heart sank. He gave me his business card, telling me that he'd love to get my feedback on a new website for the company he had just launched. As he walked away, we each looked back and smiled. What the heck had just happened?

I didn't know in that moment that I had met the man that I would marry on a June evening five years later. But that didn't stop me from basically skipping down 60th Street back to school, certain that the new lightness in my heart could lift my feet clear off the ground.

Did I love him the way that I love him today, nine years to the day since March 1st, 2006, after experiencing all of the messy, tender chaos that is trying to make a life with another human being? Certainly not. But I still recognize that same soaring feeling in my seventeen-year-old heart when he looks at me. I can tell you without a doubt that the feeling I felt that day was the first assertive spark of what I can only hope will be a love that burns steadily for many more decades.

There is really nothing about love that is logical. If you can forget your common sense, though, and maybe even channel your fearless teenage self, it will take you on one wild, beautiful ride.