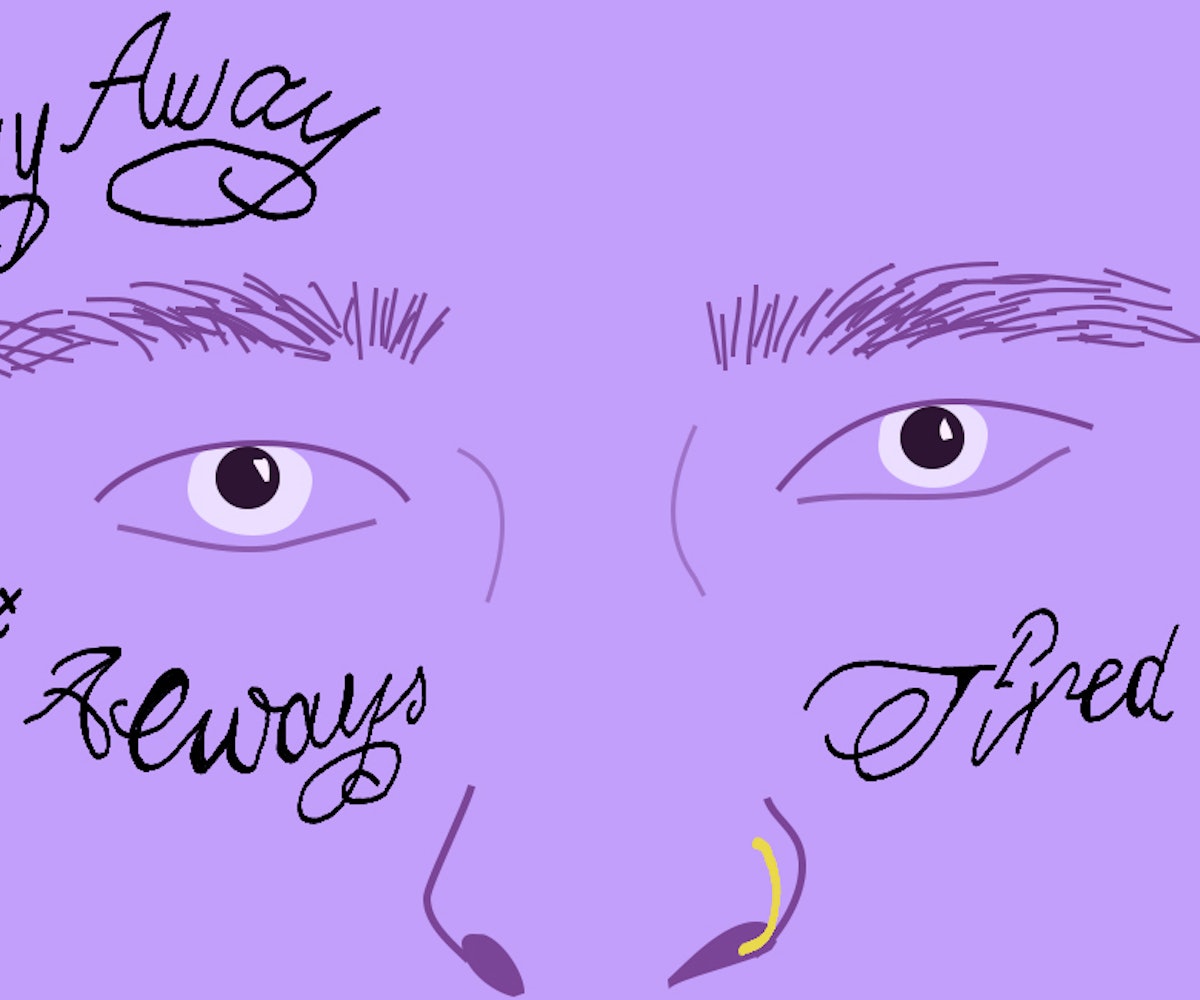 "Oh, sleep. Nothing else could ever bring me such pleasure, such freedom, the power to feel and move and think and imagine, safe from the miseries of my waking consciousness." — Ottessa Moshfegh, My Year of Rest and Relaxation

When 22-year-old rapper Post Malone was asked earlier this month why he'd gotten the words "Always Tired" tattooed in elaborate script on his face, on the delicate skin just beneath his Diazepam-blue eyes, he answered: "Anything to piss my mom off." There had perhaps not been a more relatable quote by a musician since Lana Del Rey said, a few years ago, "I wish I was dead already."

But whereas Del Rey's flirtation with Thanatos was pretty instantly lambasted by people who just didn't understand why she couldn't take death—and, by extension, life; and, to go even further, their lives—more seriously, Post Malone's insouciant attitude about his tattoo and the tattoo itself were roundly praised—or at least recognized as being representative of a larger cultural moment, one in which we all feel trapped in some hazy twilight, evocative of our teenage years, when the answer to everything feels like it could be found by burrowing under our covers; drifting off into some hazy twilight, before the darkness of adulthood descends—before we become the moms, instead of being the ones pissing them off. Being always tired, then, is a delicious abdication of responsibility, a refusal to do anything. It shirks even the amount of action it would take to lay down and die—being always tired is just about laying down.

If the idea of just laying down right now sounds particularly attractive to you, know that you're not alone. Since Post Malone's tattoo appeared, countless people have endorsed its message, advocating for a life philosophy wherein a pillow features prominently. In MEL Magazine, Miles Klee wrote about the way in which the Always Tired tattoo "embodies the millennial cult of exhaustion," offering his own experience as an example: "No matter how much sleep I get, I want more... It seems to be not just an insurmountable deficit of rest but an animating feature of who I am: a guy who could always stand to lie down for a sec." And, Klee writes: "This creeping exhaustion puts me in good company." This company is not limited to Post Malone, of course, but also everyone "under the age of 40." So, roughly, millennials.

The business of being tired is a profitable one right now, with many of our Instagram feeds saturated with ads from companies like Casper and Leesa selling cloud-like mattresses, as well as Brooklinen and Parachute selling impeccable, Instagrammable linen sheets. But while, yes, these millennial-targeting start-ups are selling bed-related products, what they are really selling is a lifestyle—the lifestyle of someone who gets to be in bed all the time, the lifestyle of the Always Tired. So, too, are wellness companies in the business of being tired; Moon Juice's SuperYou capsules, designed to relieve stress and boost energy, are one of the company's top-sellers—they sit seemingly perpetually on a wait list, so high is the demand. Goop sells similarly energy-boosting capsules, cheekily called: Why Am I So Effing Tired? Searching the word "tired" on Goop's site leads to remedies for the chronically tired, treatments for tired eyes, and an approach to "Gooping" your sleep routine.

These two approaches to our current sleep-obsession feel somewhat at odds: The wellness-based approach is designed to rouse us from our exhaustion, while the other is designed to cosset us and allow us to build our own wombs in which to retreat. Both, though, are centered around the tacit understanding that we are all suffering from exhaustion; we are all overworked and underpaid, overwhelmed by the constant influx of bad news, and incapable of acting in a way that will make any real difference. This paradox is one Maris Kreizman wrote about on BuzzFeed, framing the issue as one of self-help (or self-care) versus self-destruction, and using two recent novels—Melissa Broder's The Pisces and Ottessa Moshfegh's My Year of Rest and Relaxation—to illustrate our current problem in figuring out what to with our very exhausting lives.

Referencing Moshfegh's novel, in which the nameless protagonist wants to do nothing but sleep, Kreizman notes what a deceptively revolutionary act this is for a woman to want, writing, "[H]ow empowering does it feel—every now and then—to see a woman clutch onto her basest instincts with all her might... How rarely do women feel like they have the freedom to wallow?" In contrast to the Always Tired protagonist is her best friend, Reva, in possession of a name that evokes a delicate, dream-like state, but who is the kind of constantly self-improving person who never gets enough sleep, who is always moving forward, always aggressively wide awake. Kreizman sees Reva as the embodiment of "the tyranny of constant self-improvement," and it's clear, from reading the novel, that self-care, that being always awake, cannot protect you from the cruel exigencies of the world. But can anything?

Being Always Tired can feel like the opposite of active self-care, and yet it is not about the dissolution of the self, so much as a type of self-preservation. Sleeping can feel like a radically self-centered act, one in which the rest of the world is shut out, a time when we are alone with our thoughts, but not in control of them. It is a progression from the kind of boredom which Del Rey is said to embody, because being bored is about saying that nothing is ever enough, whereas being tired is about saying everything is too much. In sleep, we can escape the vicissitudes of life, even if we're potentially missing out on its pleasures. But even happiness can be tiring; the narrator of My Year of Rest and Relaxation notes, "for a moment I felt joyful, and then I felt completely exhausted." There's a reason that JOMO has replaced FOMO as the sentiment of the moment—we'd rather miss out on things, we'd rather sleep through the fun and the pain.

But does all this lethargy lead to an anodyne life? Well, yes, obviously. And that's kind of the idea. As it becomes more and more clear that being tired is a privilege that we can't really afford right now, as the world itself erupts into flames, there is bound to be the pushback by those people who want to return to a time and to a state of being in which they didn't have to be constantly vigilant, in which they could close their eyes, knowing they'd be protected. In which they could sleep and know that the only bad thing that could happen to them would be their mom discovering that they'd tattooed their own face.

And so being Always Tired is an understandably seductive way of fighting back against the eagerness to, you know, #resist. It feels like a quiet radicalism of its own, even if it speaks of a specific kind of privilege—the privilege to despair, to be cynical, to be a doomed romantic. But, of course, it's not as romantic as the wish to die, there is none of the death drive's blend of ecstasy and agony. And yet there is some hope contained within it of reaching the sublime, of using our exhaustion to give ourselves time to regroup, to face the world on its terms, but to do so with our eyes and heads clear, even if our skin is marked by wrinkles from our pillows, by tattooed letters beneath our eyes. We're Always Tired, but we're still here. We've just pressed snooze more than some people would like. But we'll get up eventually.