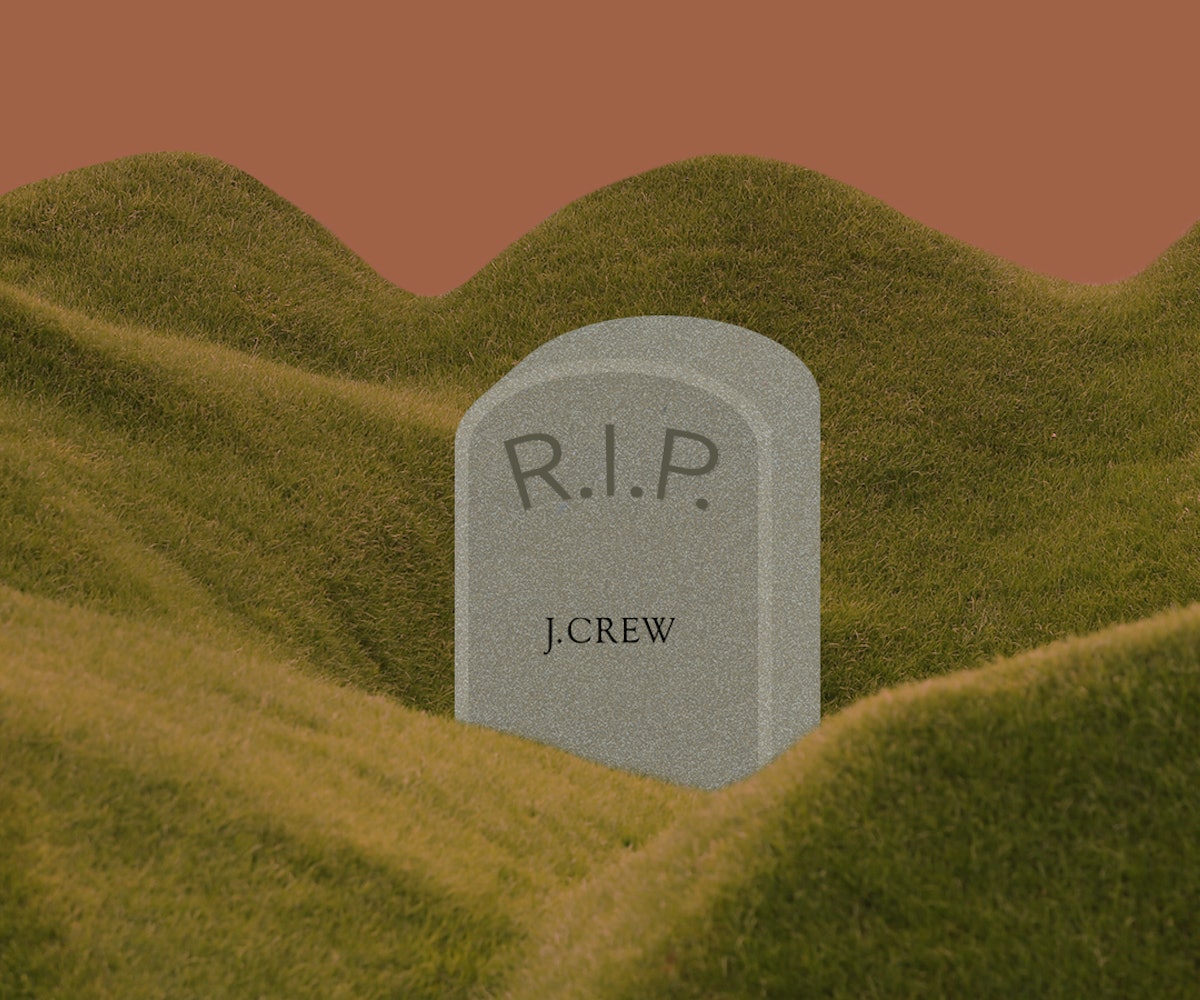 Death knells have been ringing for J. Crew for some time now. As early as 2014, news started spreading about the once thriving brand's imminent demise. All sorts of factors were blamed: The exorbitantly inflated prices, the increasing unwearability of the designs (does literally everything need to have rhinestones?), and the decrease in mall traffic, something that has been blamed for the diminishing returns of several other retailers like Gap and Abercrombie & Fitch. But despite all the effort exerted to figure out the reasons for the brand's lack of appeal, none of the fixes made much of an impact on J. Crew's declining fortunes. The negative press snowballed, culminating in the news earlier this month that the company's highly lauded CEO, Mickey Drexler, would be stepping down, and the brand would engage in a dramatic course adjustment, closing many of its stores and exploring wholesale opportunities.

While there were undoubtedly many heads to the serpent which killed J. Crew, this particular hydra's body seems to consist primarily of one thing: millennials. Comprising the largest population bloc in the U.S., and with estimable spending potential, millennials have become notorious for their ability—and willingness—to send long-established brands into an economic free fall, frequently leading to their demise. And J. Crew appears to be the latest victim.

The millennial shopper's wants and needs have been studied extensively as of late, and what's been determined paints a pretty positive picture of said consumer, but an equally dire future for retailers like J. Crew and its ilk. Shopping patterns tend to reflect cultural interests, and for millennials, culture begins and ends in one place: the internet. How this translates into sales is pretty simple: Online shopping lends itself to easy and quick comparisons, meaning that millennials are incredibly discerning in purchasing because they are adept at finding exactly what they want out of seemingly infinite options. This stands in stark contrast to decades past when people would just head to the mall or a stand-alone store, see what was readily available, and buy from the offered selection. Now, the internet has placed more power in the hands of the consumer, and millennials are wielding it in interesting, disruptive ways.

More than any other generation before, millennials seek individual experiences. This doesn't necessarily translate into millennials only buying one-of-a-kind or high-end clothing, but it does mean that in the widening gyre that is the retail world, the center can no longer hold; millennials shop the margins. This is why fast fashion retailers like H&M and Zara continue to attract customers who are content with sifting through tons of options, confident that they can find something that suits them personally and that is also affordable. But it's also why brands like Everlane (dubbed the "J. Crew for millennials" in 2016) and Reformation are doing so well; these retailers appeal to millennials' desire for conscientious fashion that might be mass-marketed, but that is also capable of making millennials feel like they are buying into a brand that doesn't just share their aesthetic sensibility, but also their ethical one.

And millennials want that! They want to find a brand that shares their beliefs, rather than attach themselves to a brand and adopt that brand's ethos. Millennials are looking for something to wear that shows off who they are. And this was getting increasingly hard with J. Crew, which developed and fostered—but refused to evolve—a very distinctive style under former creative director Jenna Lyons. That style consisted of mixed patterns and textures, distressed jeans, jewel-toned high heels, a super-specific makeup look (bright lip and coral cheek flush), and spangly rhinestones on everything from Breton striped shirts to schoolboy blazers. It was a style that was coveted for a hot second in 2012, tolerated in 2013, but then dated by 2014. Rather than move away from it, though, J. Crew dug in hard, making it difficult to go to one of its stores and find something that felt personal to anyone other than, probably, Lyons herself. To wear J. Crew in 2017 would be to dress like everyone did in 2012, a sartorial callback that feels as unearned as it does misguided; as Joshua Rothman wrote in The New Yorker earlier this year:

When I contemplated those dresses, what struck me was their willful nostalgia; preppy clothes may be inherently nostalgic, but the whimsy of these items seemed over the top. During the Obama years, nostalgia might have seemed harmless, even admirable, but today it feels like a troubled and doubtful impulse.

There's another sentiment that these clothes seem intended to evoke though: guilt. Or, rather, the pangs of discomfort that accompany feelings of disloyalty. J. Crew's insistence on promoting its once-popular styles seems like it was a strategic way of reminding customers that they once loved these designs, and thus making us feel like we are abandoning something we once loved in its time of need. It's a classic appeal to the idea of brand loyalty, something that retailers are rapidly learning millennials don't have much of—not for clothing brands, beer, bar soap, or fast food chains.

But while there have been many people decrying millennials lack of loyalty, acting as if it's some kind of a character flaw that this generation refuses to buy products which it finds inferior, the fact is that it's not only a sign of intelligence in the millennial consumer (seriously, "loyalty" is only demanded by people who want something out of you, like that you buy their clothes or stop the FBI investigation into your ties with Russia), but it's also a remarkable opportunity for brands to develop in ways that will not only benefit them with millennial consumers, but that could benefit them long-term. After all, the things that millennials say they want—high-quality, eco-friendly options that place an emphasis on individuality and experience—are not things to be afraid of; the fashion industry is the number two source of pollution on this planet, perhaps it's time for a shift in a healthier direction anyway. One thing that's clear, though, is that the surest way to retailer death is by refusing to change course and adapt to a rapidly changing retail reality in which consumers hold a new kind of power, and aren't afraid to use it.