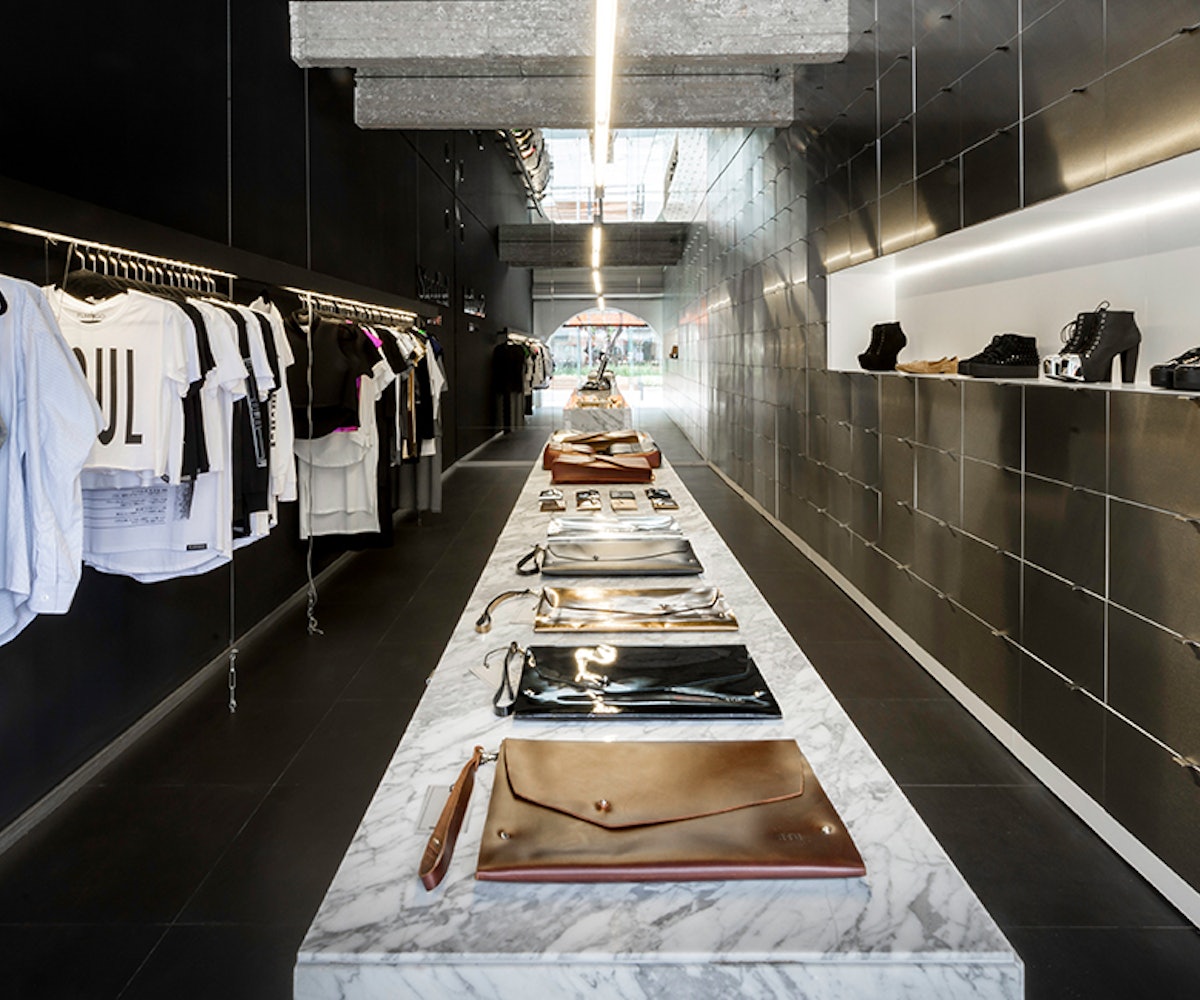 When Regina Vega was in high school in Mexico, she spent two years of lunch breaks on-hold, trying to connect by phone with the Jeffrey Campbell team in Italy. When her parents—who paid her phone bill—discovered what was going on, well, they weren't happy.

But, it was the height of the Jeffrey Campbell 'Lita' shoe craze and young girls everywhere were pulling whatever stunts necessary to get their hands on a pair of the cultish, impossibly high platforms. If Jeffrey Campbell wasn’t distributing in your country, those stunts might have meant devising a plan to open up shop and start selling them yourself. Such was the case for Vega who, at 19 years old, co-opened Stendhal Store with her sister, Gladys, in the posh neighborhood of Polanco in Mexico City.

Today, although they still stock the shoe giant’s newer collections, they’ve set their sights on designers who work closer to home, and have an inventory comprising 80 percent Mexican designers. Rather than being a move of convenience—quite the opposite, actually—it’s because they truly believe in the fashion coming out of their own country. They’re betting on one of their brands becoming the next Jeffrey Campbell, with its own ‘Lita’ to make stubborn teens around the world drive their parents crazy.

For a long time, being a designer in Mexico City was a thankless trade. Young, experimental fashion designers looking to find an audience for their work were involved in patterns of rejection, and would eventually leave for more open-minded markets, adding to the creative brain drain taking place in the city. What they found in their own country was a culture closed to new ideas coming from within.

Designer Salo Shayo describes the phenomenon as malinchismo. He says, “the malinche was the native person that lived in Mexico when the Spanish people came and conquered. She was the one who helped them translate everything, she helped them conquer Mexico. We use that term for [people who have] hate for the things that are made here... a certain rejection of the things that are made in Mexico by Mexicans.”

There are a lot of reasons why Mexican consumption is the way it is: NAFTA, the economic crash of the ‘90s, the far reaching grip of European luxury marketing, the competition-crushing production models of fast fashion.

But over the last year, the pattern has been shifting. Suddenly, emerging Mexican designers feel that they are finally getting the opportunities and recognition they need to emerge.

Shayo, who makes gorgeous cotton and felt garments in unexpected cuts under his eponymous line, Salo Shayo, took a break from showing his collections internationally—he’s a regular at Berlin Fashion Week—and has doubled down on efforts locally. His new line, Roots Project, focuses on simple textiles and universal silhouettes. He says he’s had to "tropicalize" the prices a bit, but that he’s gaining traction among Mexican consumers like never before. The idea is to crack the code locally and then expand to markets like Los Angeles and New York—an inverse of his previous approach.

Designer Barbara Sanchez-Kane, who runs the gender-fluid brand, Sanchez-Kane, has also bounced back and forth between Mexico City and international markets over the last couple of years. Her designs are not what Mexican consumers have come to expect from high-end fashion, nor are they what international markets imagine when they hear ‘Mexican designer.’ For instance: the bulletproof vest-inspired top and belt buckle made of wire, bent into the shape of a fetus, that she sent down the runway for her latest collection at New York Fashion Week. She says, “my brand is really different in Mexico. It's taking Mexican folklore and twisting it in a different way—in a hilarious way, in a political way. So it does break a lot of stereotypes of what a Mexican brand should be.”

Like many Mexican fashion insiders, Sanchez-Kane has mixed feelings about her brand taking off after finding success overseas. “For me it was very difficult to enter Mexico. I sent a billion emails after graduation and no one answered, but then emails started to arrive after the first time I showed at VFILES in New York,” she says. “It was backwards. Not because I don't want to be in Mexico, but because they don't comprehend [my designs].”

Suzzan Atala, owner of Tuza—a concept store in the hip neighborhood of Roma Norte, where she sells her own jewelry designs as well as other Mexican-made brands—shares this ambivalence. “I have been in Dazed magazine as the coolest brand in Mexico. I’ve had to have international recognition in order to have national recognition.”

Even so, the exposure to other markets has helped catapult Mexico City’s fashion scene into the global eye. For one, Atala’s vagina necklace going viral (Ryan McGinley can’t live without his) after being sold from the New York workshop where she first launched her line allowed her to finally open Tuza in her hometown, Mexico City. She has since opened up a second store in New York City’s Chinatown, and says that the name recognition has encouraged more designers to want to show their pieces in her Mexico shop. “Tuza is starting to be a destination. That’s the plus that I offer above anyone else that has a store in Mexico. We’re not massive, but people are starting to know who we are.”

The city’s customers are becoming more worldly, as well, thanks to platforms like Instagram, which opens up channels for discovering new ideas in fashion and speeds up the dispersion of trends.

Regina and Gladys Vega of Stendhal Store recount how young shoppers will visit their store and ask, “Do you have Off-White?” It’s a bit of a pick-up line, they admit, but it’s telling that edgier brands are taking priority in the minds of young Mexican consumers over Hermès, Louis Vuitton, and Gucci, to which their parents’ generation were so loyal.

For their part, the Vega sisters are educating their customers on the Mexican designers they carry. This might mean pulling up designer Man Candy’s Instagram account, or showing off a new editorial featuring H. por Hector. One of the main tenets of their strategy is interspersing Mexican designs with more recognizable international brands, like GCDS from Italy. “We wanted to use this space and concept to demonstrate that Mexican designers are up to the global game,” says Regina.

When pressed about why this sudden interest in Mexican fashion was happening now, a grimmer admission emerged. Since Trump’s election, designers have described their country as more urgently united than ever before. “I know it sounds bad, but maybe it was a good thing,” says Atala. “It’s going to make people realize how good it is to be united.”

The concept of mutual support in Mexico is not a given. Atala describes the culture as “crabs in a bucket.” She says, “If we see that one is getting out of the bucket, we’re going to pull it back down. That’s a sad thing about Mexico, but things are changing.”

Fervent patriotism in response to anti-Mexican sentiment broadcasting (and tweet-storming) from the White House has instilled a new urgency in Mexican consumers to support homegrown brands. The social pressure to shop local, even in the luxury sphere, has shot up. After decades of chasing European and American goods almost exclusively, consumers are returning their gaze back home, and what they are finding is a wealth of highly evolved, incredibly thoughtful, distinctly Mexican designs.

“It’s not like ‘if it’s from Mexico, you have to have wood boxes and huipiles [traditional woven garments],’” says Regina Vega. “No, you can see another part of Mexico that has brands that can compete all over the world.”

“We’re using our heritage. We’re using artisanal traditions in modern techniques and designs,” says Sanchez-Kane. “We’re stepping forward not just copy-pasting on a shirt, but playing with artisanal work and the folklore that is our tradition in Mexico.”

For her part, she believes the boom Mexico’s fashion scene is having right now is emblematic of bigger change. “When you want to change your country, you need to have your own DNA. We stop copying Europe and the United States, and we start trusting what we have and our abilities to create. We’re Mexican... we’re not in Europe or New York or L.A. We have this creativity, and it can come from inside us.”