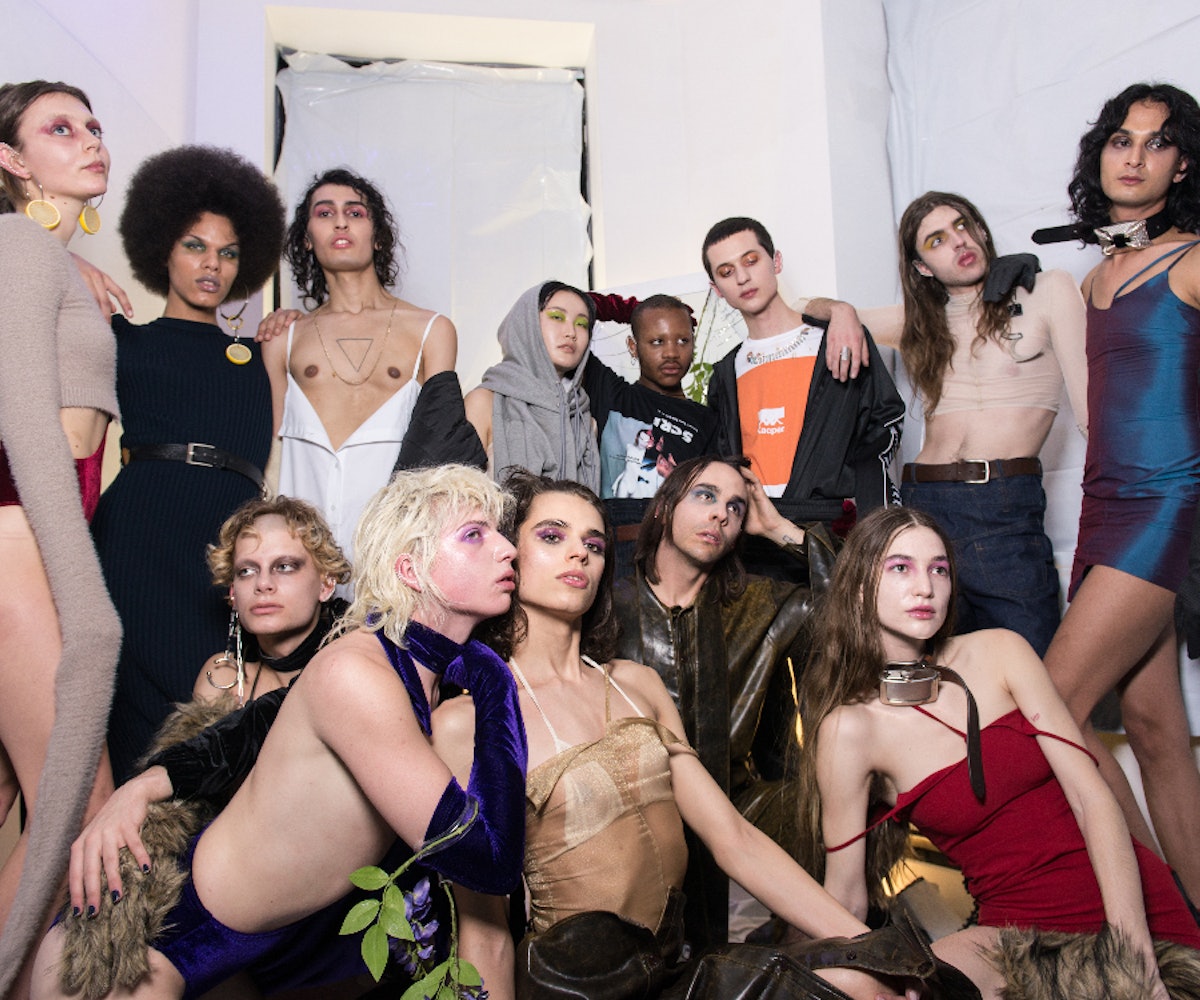 As a new generation of talent begins to take footing in any industry, there's inevitable resistance from the old guard. We’ve seen this plague music with pre-digital listeners still desperately clutching onto their favorite Beatles vinyl and we're beginning to see it more in fashion, as shown by the

has been destroyed by a flock of "wannabes"

and as a result, spawned endless uninspired presentations. “It feels more like a game show or a reality show, than anything underground, fresh or unique,”

While we'll be the first to admit the fashion community is overstocked with silver-spoon tastemakers, armed with boundless budgets and a questionable work ethic, these lofty claims sound more like criticism fueled by nostalgia than anything concrete. Besides, this post-Mercedes Benz landscape feels the most inspired it’s ever been—a week packed with decentralized, off-the-grid showcases from unseasoned designers who’re tackling their rising careers as true independents without the support of a larger corporate power.

“I noticed it [the other night] at the opening party for men’s fashion week,” Elliott added in the article. “Seemingly all of the people there were publicists and bloggers.” If fashion is a direct reflection of sociocultural changes throughout time, then the contemporary environment is one that looks exactly as it should, loaded with everyday enthusiasts who’ve used the online space to break in. Prior to social media's dominance, fashion was an illusive beast who’s heartbeat pumped only for a select few—no outsiders allowed. This is important to reiterate in response to the

nose-in-the-air claims, which fondly recall an era when “style-obsessed teens” (Read: everyday plebeians) would camp outside Lincoln Center to catch a glimpse of fame. Fashion desperately needed to open its doors to multiple voices, creating a dialogue between people who wouldn't normally converse—not just editors to editors, models to models. Barriers to entry are low online, now allowing for the world of fashion to belong to more than just the privileged upper crust. The lustrous aura of Fashion Week isn’t “ruined,” as suggested by the

Perhaps it’s inconvenient to editors who’ve been in the game for long enough to remember a time when NYFW shows unfolded in one sole location, but the most innovative collections can be best discovered in unconventional, unofficial spaces with a slim 10 to 20-person audience—nothing fancy, but deeply genuine. This new wave has been quietly building for quite some time; one year ago, Vejas Kruszewski, then 18, unveiled his AW '15

collection in a cramped gallery for an intimate crowd of mostly student peers. Where were these cranky, critical editors when his cinematic genius was first unveiled to those who were curious enough to attend? In September,

This season’s schedule was packed with even more inconspicuous shows from rising labels, giving weight to an entire population of young New Yorkers who’re carving out a space that speaks to their needs and wants—not an untouchable editor’s. At

’s presentation, designer Victor Barragan staged his Fall ’16 collection inside an apartment, lining the walls with plastic sheets and streaming the entire spectacle on the sex webcam site, Cam4. His models, all cast off Instagram, gave strip-teases in front of a laptop, taking monstrous bites of corner store croissants, rubbing themselves in vaseline and slowly removing their tops for an anonymous online audience. One model even took a crushed plastic cup and swallowed a piece, visibly struggling as the fragment worked its way down their throat. If a seasoned editor’s idea of fashion heaven is Alice + Olivia, this was hell—an exciting, subversive world we’ll happily take residency in.

Shan Huq returned with a sophomore effort this season, unveiling his Fall ’16 collection in East Village’s Cloister Cafe—a dimly lit restaurant with dramatic stained glass windows and an open garden. Chairs lined the dining area, transforming the space into a DIY runway show, as models filed from the cramped basement wearing sheer tops, one in a floor-length coat with Tila Tequila’s face on the back.

took a similar route, taking over the China Chalet in the Financial District, where an excited swarm of art students filled the space around

, smoking cigarettes inside and sipping on cheap cocktails. Taking cues from vintage Westwood productions, Vaquera’s models paraded through the space to blaring Spinee-mixed sounds from a speaker system best suited for a neighborhood block party—amazing, nonetheless. They fake fainted, flipped off cameras, put out cigarettes in attendee’s drinks and flashed their nipples, as the room roared with approval. There were no rules, no restrictions—a far cry from the sterile, stagnant atmosphere that pervades most of Fashion Week.

rolled out her latest collection, starring a full cast of transgender models, all dripping in fake blood with blue tears falling from their eyes. She created the chilling production as a response to violence from cisgender men against trans bodies, playing off the “Final Girl” horror film trope and forcing her audience to confront the problem for the duration of her runway show. Where a lot of top designers seem to be mindlessly dropping in a token trans model for street credibility and the press’ approval, Graham is the only contemporary designer who’s working from personal trans experiences and producing something deeply genuine. Subversive authenticity is difficult to unearth in the upper echelon of fashion, as the

points out, but it’s not nonexistent. A slew of rising brands echoed Graham’s independent hustle this season, from

Overlooked, but well-deserved marginalized talent would greatly benefit from mainstream fashion press, but if the larger conversation is focused more on whining and looking happily on the supposed glory days, this new wave will never be properly elevated. It’s a shame to waste energy on all the wannabes, when there’s young, veritable voices working tirelessly to revive New York fashion. The Underground is taking over, so if you’re not warmly welcoming and elevating this chorus, you’re simply falling behind—facts.