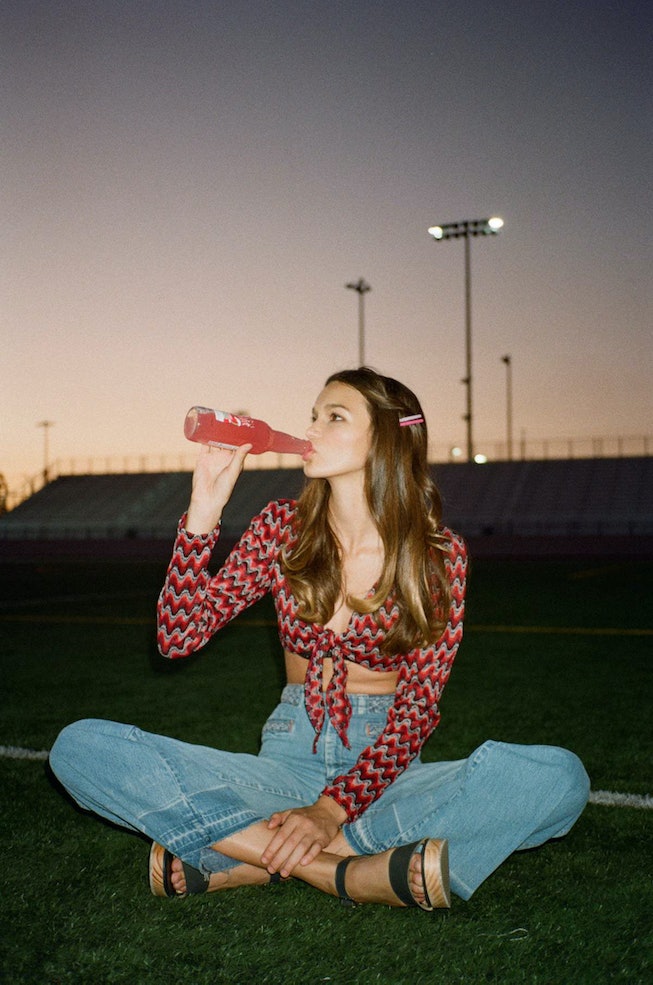 You know that episode of Lizzie McGuire where Hilary Duff (AKA Lizzie) ends up wearing a green-paint-covered unicorn sweater on picture day? We're guessing a character from a live action teen-sitcom isn't the only person to have experienced awkward picture days in school. If you ask us, it always felt so strange because people put too much pressure on them.

From this new photoshoot inspired by yearbook photos in the 1970s, photographer team Vanessa Hollander and Wilson Philippe (the boyfriend-girlfriend duo behind wiissa--which, yes would be their celeb couple name if they had one) created an exclusive editorial for NYLON that basically features the yearbook we wish we had.

Inspired by the year 1976, these take us back to when Lux realizes Trip has left her all alone on the football field in The Virgin Suicides, but then someone quickly tells her to get her shit together for picture day.

Even though we can't wait for you to check out this dreamy shoot, there are a few things you might want to know about the quasi-nomadic duo who are part of fun projects like this one all the time.

The pair met in middle school and have been dating and working together since moving from a small island off the coast of Miami to New York, and then LA (and then back again). Along the way, they'd go on photographic road trips. Now, as a team, wiissa have carved out a niche made of good vibes, sunshine, and bellbottoms; looking at their super-8-soaked photos you get a true appreciation for the past without it feeling like stills from a retired costume department. And we're not the only ones who think so; Cult Records, UNIF, and pop duo Jack + Eliza have all commissioned their work.

At this point, their photography has gone from just a fun thing to post online, to gaining representation by Nouvelle Vague LA and being featured at Milk Studios for Flickr's first-ever global 20 Under 20 competition--all of which we just had to know more about. So we've asked Vanessa and Wilson to give their perspectives on each other: what Wilson's high school superlative would be and what Vanessa's favorite thing to do after school is.

What is it like to work with a significant other on-set?

It's amazing and super convenient. We can work at any time and anywhere since we're always together. It definitely takes the right type of couple to be compatible in the business sense too, and we've been really lucky to have each other!

What was Wilson’s high school superlative?

He was actually homeschooled then, so he was the only kid in his "class"...I say he wins everything.

If Wilson was a movie from the '70s which would he be?

Pretty sure it's either the lightning bolt or cactus emoji.

Do you guys ever go shopping together?

It's kind of funny, we really don't have that many (cool) clothes, but anytime we find a cool piece, we'll just wear it basically everyday. We both hate shopping so much, so once we've totally worn out our clothes, we'll go and try to find at least one or two pieces we can wear nonstop for a while. The only time we really want to go shopping are for shoots like this one! It's too bad that most of these clothes don't fit either of us though :(

Did you guys get into photography at the same time?

Yeah, basically! We were both doing weird photo and video stuff before we met, but didn't take any of it seriously until we got our first film cameras together.

Did he have a memorable yearbook photo?

This yearbook picture of him is adorable (click the slideshow to check it out!)

Crepes with Nutella 'cause he's a Frenchie.

What do you think about nostalgia being “trendy” ?

I feel like everyone will always love nostalgia, and always love looking at old photos and videos. With the Internet though, we can access all of these old photos so easily, which I think is amazing. I spend hours looking at photos from the '70s and get nostalgic for a time I didn't even live in.

Mario Kart on the Nintendo 64!

I actually chose it based off this amazing graphic I saw online that had the 7 and 6 stretching in opposite directions. It just fit perfectly with the shoot too!

What’s it like to work with a significant other on-set?

It’s amazing! I couldn’t do it on my own and would be so unsure of everything. It’s nice to be able to bounce ideas back and forth and always have a second opinion on everything.

What was Vanessa’s high school superlative?

If she was a song from the '70s what would she be?

Did she have a memorable yearbook photo?

Check out the photo in the slideshow.

Does Vanessa have any secret talents?

If she were on the cover of a '70s issue of NYLON, what would she wear?

A huge faux-fur jacket and really flared velvet pants, or an all denim jumpsuit!

What’s the best present you’ve ever given eachother?

Vanessa got me a tandem bike, we don’t do anything separately, haha!  The best present I’ve gotten her was a ticket for her and I to see Jane Birkin live in concert last year.

What do you think about nostalgia being “trendy” ?

I love nostalgia and think it transcends being a trend. I think our generation is really nostalgic of the past because we have such direct access to an overwhelming amount of images, music, and art from various eras. Also, it seems like more than ever the future is shaped by mixing bits and pieces of decades gone by.

Vanessa’s favorite thing to do afterschool?

I’m not even sure! Vanessa chose it and it seemed like a good fit for the shoot. Also there’s a vintage Starsky and Hutch shirt used in some images so it had to be after 1975, which is when the show came out.

Model: Impy Lukkarila at Next Models

Clothing: Stylist’s own and a few pieces from Stoned Immaculate Vintage