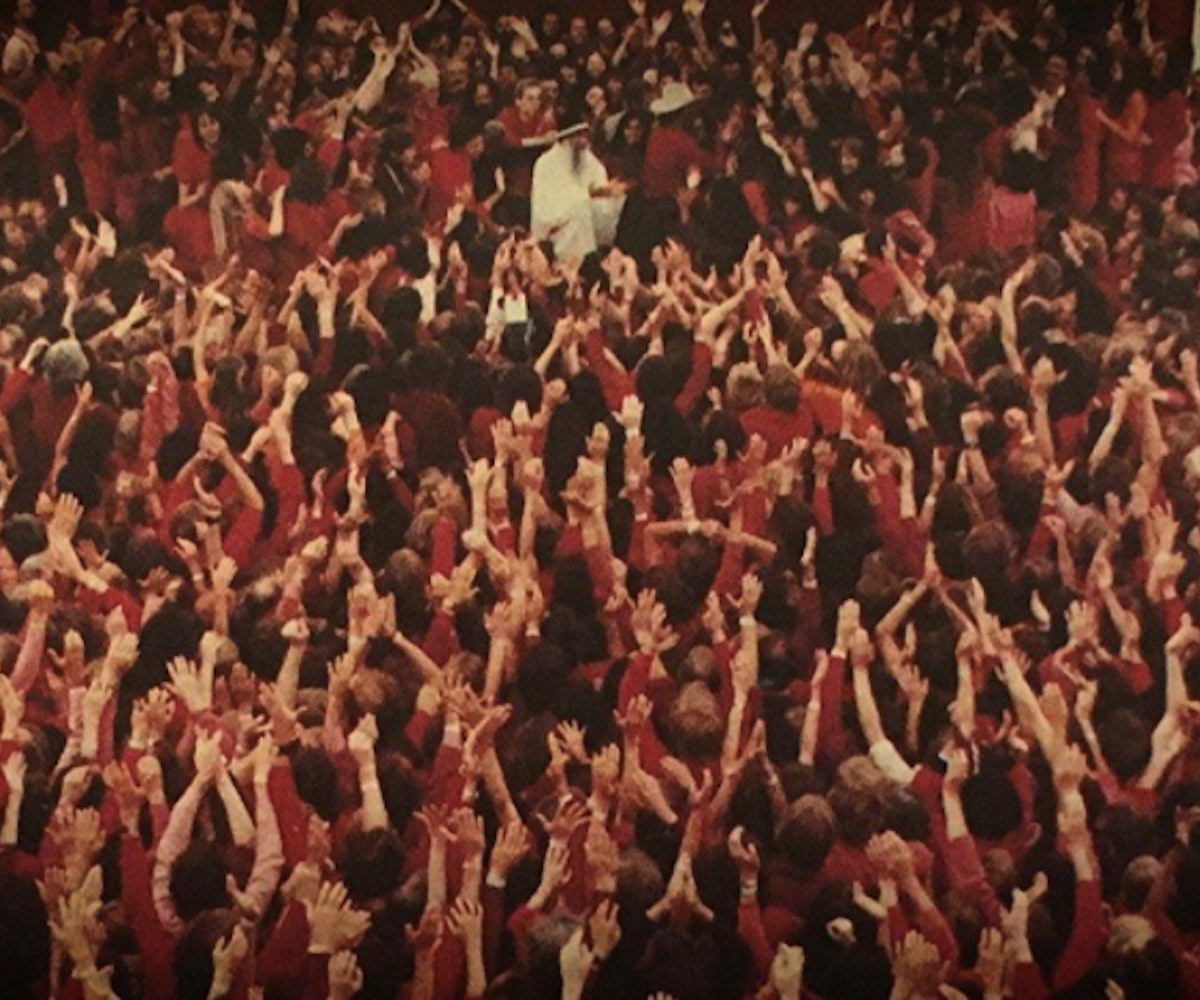 The new Netflix docu-series Wild Wild Country focuses on a strange, specific moment in American history—when thousands of members of the Rajneeshpuram commune (who followed the guru Bhagwan Rajneesh) descended upon land they'd purchased just outside Antelope, Oregon—but makes it universally fascinating and extremely politically relevant today. Produced by the Duplass brothers and directed by brothers Maclain and Chapman Way (so many brothers! Well, we are in Aries season), Wild Wild Country recounts the ways in which intense xenophobia, violence, sex, and fear all played a role in the ultimate showdown between the cult and the local townspeople. It's an incredibly interesting and almost uncomfortably pertinent narrative, and we were happy to talk with the Way brothers recently about Wild Wild Country and the strange allure of cults.

How did you first heard about Rajneeshpuram, and what was your entry point into this place and time in history?

Chapman Way: I was born in 1986, Mac was born in 1991, and we both grew up north of Los Angeles, and had never heard of Rajneeshpuram or knew anything about Bhagwan Rajneesh. It wasn't until four years ago that we were talking to a film archivist in Portland and he started telling us that he had this collection of over 300 hours of archived footage that had never really been seen, on what he described as the most bizarre story in the history of Oregon. So, he started telling us about this cult that built this 100 million dollar city and took over the neighboring town of Antelope and... poisoned 800 people. [laughs]

We were just like, "How have we never heard about this?" We like to consider ourselves somewhat well-read and aware of these kinds of events, and we were familiar with Waco and Jonestown, but this was one that had never crossed our radar. But it wasn't until we started researching it, and then we kind of saw that there was a lot more complexity to this issue than had been previously been reported, and that's what really got us excited about diving into it.

An interesting aspect to retelling it is that many of the major players are still alive. What was it like contacting them to participate in the project?

CW: I'd always had a knee-jerk kind of dismissal of and reaction to cults and people that join cults. It wasn't until we started reaching out—to Sheela; to the lawyer, Naran; Sonny, who was the PR person; Shane Nanda, who was the financial president of the commune—and we came across these really highly intelligent, successful people in their past lives who threw everything away to build this utopian dream. And right away, we realized there was a lot more depth to these characters and how people are usually portrayed as the kinds of people that join cults. It was really interesting for us to get to know them.

Maclain Way: As we started reaching out to people, it became clear that this story brought them a lot of pain and trauma—and they'll tell you that—but it was still something that they felt was almost the most important thing that they had ever done in their lives. And then the other interesting thing was, as we started to get to know the Antelope ranchers, or even federal prosecutors that worked for the United States government, or Oregon state prosecutors that worked for the state government, this had such a huge impact on them as well. So, I think that, as documentary filmmakers, we were interested in talking to people who had such deep stakes in the story. We weren't really quite interested in interviewing "experts" or, like, people who study religion or cults or things like that—not that you can't learn a lot from talking to those sorts of people, you certainly can—it's just, for our talking heads, we tried to kind of keep them limited, so you really feel like you get to go on the journey with them, and essentially, you're talking to the people who were kind of on the front lines of this battle.

It's a particularly interesting approach to documenting a cult, because while you can intellectualize why people would be compelled to join one, it's not really an intellectualizable experience to join one. It's more of like a viscerally felt thing.

MW: Yeah. I think that was, yeah, really kind of important to hear, 'cause I think we kind of figured that out early on. Even more than what attracted them to the guru, you really got a sense of what attracted them to this community and to each other. And I think that was a bond that they all created and they all felt, that was almost larger than just the context of a cult or having a master, it was really the community that they built and lived in. And we hope that were able to get that across to an audience, that they can see what this community meant to our interviewees.

There are really two communities in this film—the followers of the guru and the people living in Antelope—and it's presented in such a way that really resonates politically, since there's a dynamic set up between "immigrant" versus "American," even if that is a false binary.

CW: It was really interesting spending time in Antelope, and talking to the Antelopians. I think they had a very legitimate fear [of the Bhagwan and his people], you know? There's this cult that they know nothing about, dressed head-to-toe in red, that's moving in by the thousands and gonna destroy their way of life. But, that's a conversation that we still hear today, with gentrification. Do groups have a right to move in [somewhere] and completely change it? But, then, I think, it's also more layered than that; these frontier townspeople took it from the Native Americans hundreds of years earlier, you know? So, I think, embedded in the story is, like, a really rich, contextual conversation about who has a right to form towns, who has a right to this land, and, as we got to know both sides, it was actually amazing how much the Rajneeshees and the town of Antelope actually had in common. Both of these communities were trying to build their own American dream. It was kind of fascinating to see the similarities between the groups. Half the time, I think, that the fear of the other, and the cult hysteria that was sort of sweeping the nation after Jonestown, just created this really combustible environment where neither side could really see the other side.

What were some other things that surprised you?

MW: Why people had ultimately decided to participate. Whatever your position was within this story, it was really interesting because, while people from both sides were hesitant initially about participating, they realized they didn't want this story to remain forgotten, left in the dustbins of history. They saw it as a warning. Obviously, both sides see the story as a completely different type of warning. One side sees Rajneeshpuram as a warning about the persecution of religious minority groups, and how that can happen in America. The people of Antelope see it as a warning about the dangers of cults and how they can brainwash people into doing completely illegal things and terrorize a community, essentially. So, that was kind of the most interesting thing: Their reason for participating was kind of the same, but, also, like, very, very different.

That connection is really fascinating. Maybe it even sort of bridges a seemingly cavernous divide.

MW: For sure. I'd say the most interesting thing since Wild Wild Country has come out is that, at the end of us making Wild Wild Country, the two sides just kept on getting further and further and further apart. But the weird thing that's been happening lately—and it's only been happening for the last two, three days—has been feedback from people who are now like, "Wow, I really never saw it from the other side's perspective. I never really even heard the other side's perspective." I wouldn't go as far to say that compromise looks promising—because I still think that, for the most part, these groups definitely are entrenched [on their respective sides]—but, for the first time in the four years that I've started to research this story, I'm starting to hear things from people who are part of this story that are [understanding]. And both sides are saying that about each other. That's been kind of a new development that, personally, I just find fascinating. I'm kind of excited by it, because I just kind of thought that, if anything with Wild Wild Country, we show how divided these two sides are. So I thought that maybe it would push them even farther apart. But in a weird way, I think that it's kind of opening up eyes and ears again for the first time in 30, 35 years.

CW: Maybe that'll be Season 2 of Wild Wild Country. We'll do a town hall meeting. We'll get everyone back in Antelope. [laughs]

CW: Maybe Netflix will let us do a one-off live special from Antelope.

[Laughs] I think a live special is a great idea. Nothing could go wrong with that.

MW: Leave your guns and poison at the door, and everything will be fine.

Wild Wild Country is available for streaming on Netflix now.