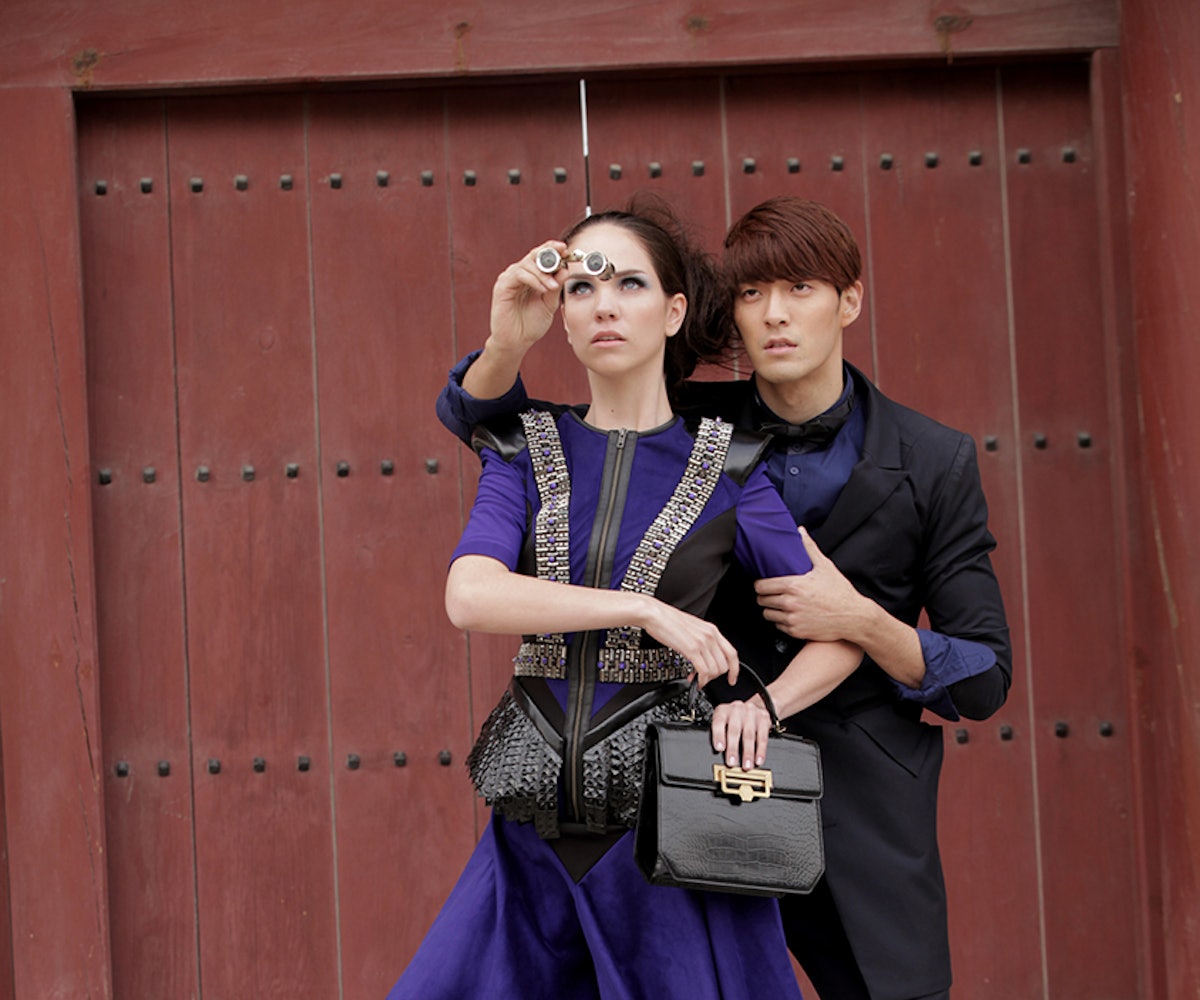 Save the drama for your mama! This episode is full of drama and of course, it’s all centered around one person. Let’s dive in.

There’s me still crying in the corner with Shei and Lenox over the loss of my boo, Raelia. When we tell Chantelle what we are talking about it gets real weird with this fake, “I’m sorry, and I miss her too.” Did anyone else see her touch Shei’s face? What was that about? I stay out of it, but baby Lenox goes in for the kill. Lenox had enough of Chantelle’s attitude in the house and couldn’t be silent anymore. Chantelle doesn’t want to hear from Lenox for the rest of the time we are there, to which Lenox replied, “Thank God.”

Look out Korea, the giant is coming! Seoul was not ready for this big old boy to hit the runway. There were no clothes that fit. I’m not a person to make excuses about things so I do agree with Kelly that I should have used my charm and pizazz to book the jobs, but when you can’t get pants over your thighs, I don’t know if a smile and a wink are going to get you the job. Unless they like half-dressed models walking down the runway, in that case I’m your fella.

I was partnered with Shei and luckily, we were both saved from the attitude queen Chantelle. We were lucky enough to get to the designer everyone wanted to go to first. I immediately got frustrated with my growth spurts in middle school. Curses! Shei didn’t wow some of the designers and they couldn’t comprehend why her hair was the way it was. She couldn’t control that, so we both kind of just went with the flow. They either hated her hair or loved everything about her. Proud of my bae Shei. I don’t know how but Keith and Chantelle made it to five designers. How in the world did they manage that? Keith ultimately used every bit of his charm and wit to win over the designers. Touche, Keith, touche. I have to disagree with Chantelle about how the designers didn’t book her because of her skin. I heard through the grapevine that her personality hurt her on that challenge. Then again I just heard and didn’t see. Adam and Lenox barely made it in time for the final judging with Kelly. It was hard to find that place and we surely got lost a few times so I was worried about Lenox and Adam. Alas, we all made it and found out that I could have stayed home since I didn’t fit. I gave it my best shot! Shei did awesome as well as the stunning Lenox but Keith took the title and won this challenge. Maybe I should take notes from his confidence. He's becoming a huge threat!

Gulp, gulp, and gulp! Adam hasn’t curtailed his drinking, so… we did. I may have hid a few beers in the house so that he couldn’t find them. OOPS. When you love someone and have grown to be great friends, you want what is absolutely best for them. Keith and I had a little intervention with our boy Adam and laid it down that we can’t tell if he is sober or drunk half of the time. Not a character quality you want to share with the world. Adam lets us in and shows us a more vulnerable side. Alcohol helps him to let loose. Well, babe, you shouldn’t rely on alcohol to mingle and get to know people. We want to be around the real Adam and get to know that person. Only then can you be confident in who you are. Let’s hope it gets through his head and he cuts out the drinking!

Here’s a little behind-the-scenes scoop! We were able to go out and dance at Korea’s hottest dance club after our challenge this week. Oh, how I missed dancing. We drank, danced, and mingled with each other and the club-goers. If you want to see the top six let loose be sure to download the LINE App and watch the video of our Korean club experience. Someone may have had too much to drink! And no, it’s not Adam this time!☺

Jinny Kim was one of the designers we were able to meet on our go-sees this week and for our next photoshoot we will be modeling her shoes. I’m loving all of these client photoshoots. I feel like a real model. Dear Jinny Kim, can I get a custom pair in a size 13? This 10 doesn’t seem to be working for my feet and the 15 blisters that are forming. You know what they say though, “No pain no gain!” Time to push through. I loved working on this shoot with the Korean models. I have been getting great feedback for every photo so I’m feeling confident and not stopping! Adam came prancing in like a flamingo and puffed up his chest to show off his growth. I’m really proud of him and how far he has come. Keith has found that fire he was missing. I need to get my fire blazing to stay ahead of him. Lenox is still my biggest threat in my opinion. She doesn’t have the confidence she needs but she kills every photo and I can’t handle her perfection. Shei continues to deliver and showed us the meaning of side toochedness. Is that a thing? Chantelle struggled on this photoshoot and it was hard to watch. She has been getting feedback that she needs to loosen up and relax for the camera and it was very apparent that she didn’t know how. Tyra and Yu Tsai had to get her to do hair flips to let go and get the shot. In the end, we made some shoes look flawless.

Yu Tsai and his nicknames have gotten him into some trouble. Chantelle doesn’t like being called Panda, understandably, but it is Yu Tsai. He screams all kinds of obscenities to all of us on set. You’re just now trying to get him to stop? Tsai apologizes and says that she needs to fix her attitude.

Favorite quote of the episode was Yu Tsai saying, “I don’t work for you” after Chantelle told him, “You rub me the wrong way, too.” Boom. Something we all have to remember. We are not the client, we are there to deliver and block out the world to give the employer what they want. Yu Tsai could be calling me terrible awful names but it’s my job to give him what he wants. Know your place in the business and that goes for all six of the remaining models.

Someone can’t stay out of the drama! I won’t rehash the argument between Keith and Chantelle, all I will say is that it was real. She got caught, got embarrassed, and didn’t want to deal with it. Just know that it was not an attack or anything against her. At that point, we didn’t know if it was true (AKA we assumed it was true until Keith reacted the way he did). Note to self, if you lie, be ready to toughen up and suffer the consequences of your actions.

Fierce five goes to Keith, Lenox, Shei, Adam and myself. I loved everyone’s picture this week. We have gotten so much better as the weeks have progressed and I can honestly say that it is anyone’s game. Chantelle gets sent packing and as relieved as I was to see her go, I also felt bad. She is gorgeous and will do great things, but her attitude just got in the way of her success on Top Model.

Who do you think is going to end up on top? Leave your comments below.

Only three episodes remain until we crown the winner of America’s Next Top Model Cycle 21! Next week we lose another model, so make sure you tune-in on Friday, November 21 9 p.m. (EST) on The CW to see who makes it to the next round! In the meantime, follow Will on Instagram and Twitter and also follow ANTM on Twitter and Instagram for more behind-the-scenes insider’s scoop. Until next time, toochers and boochers.