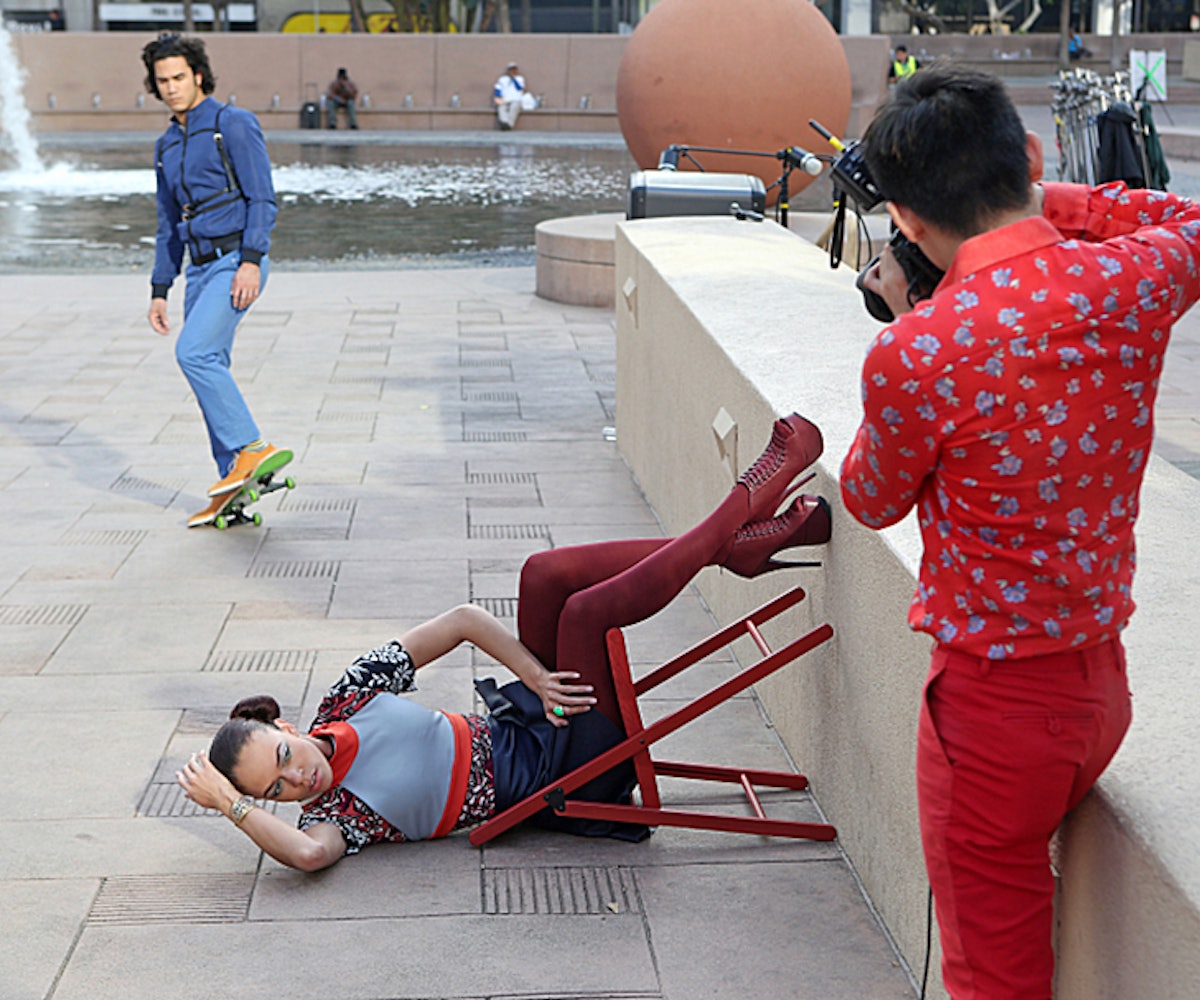 all photos by massimo campana/pottle productions inc 2014, courtesy of the cw

Another week, another #modelmonday! Who loved this week’s episode of America’s Next Top Model? I can’t get over it, it was so amazing. From the photoshoot to the makeovers, Cycle 21 is no joke!

Our first night back in the house after panel, I was truly missing Ivy but after that stress of an elimination I had to let loose and get ready for the next week. What does that look like? Alcohol.

I think I deserved a little drank after that scary mess. Some people like their alcohol a little too much! Overall, I loved hanging out with everyone that night because it truly was the first time we got to bond in the house without the competition on our minds.

For this photoshoot, we were creating optical illusions with our pictures AKA our abs, obliques and back muscles. I have to tell you that this was the most strenuous shoot for all of us in the competition. You had to use every ounce of strength you had to levitate to make the image believable or you would be on the next train home! Working with An Le was a blast, he’s such a talented photographer that got us pumped up before the shoot and gave us everything he had to make us the best models possible. I loved so many pictures this week! The two standouts for me were Ben--with his amazing focus and body position, but also Lenox. That girl has some power behind that timid little voice. To me she is the strongest competition and everyone better watch out.

Not everyone can do amazing though; Romeo struggled and to me had a very easy pose. It was hard watching him fail every shot but you have to overcome and make it happen. Denzel also struggled but I will say that his pose was by far the hardest out of everyone’s. He not only had to levitate, he also had to hold a huge bicycle while doing so! (That poor baby.) Yu Tsai did not help that situation one bit and Denzel had enough and stormed away. It was rough to watch because you never want to see your friends frustrated…

…Oh wait, this is a competition.

Keith and Kari got special treatment with all kinds of goodies, and I’ll let you in on a little secret, I stole some! Oops!

Who captured your attention as a new threat in the competition?

Look at that pretty box! Looks like it’s time for some Tyovers!

Who found three boxes? This guy.

I can guarantee you that they were not about to chop off my luscious blonde locks of hair. I felt so bad for Denzel. I mean, a beard weave? Lord have mercy on my soul! It just made him look very cheap in my opinion and I was and still am not the biggest fan. I loved Romeo’s makeover. It gave him that extra edge that he was missing. His post-makeover shot is one of my favorites. Even though Keith didn’t get a makeover, he still has to bring his A-game and meet the rest of us now that we have crazy, awesome looks. We got a new Cleopatra in the house, my girl Raelia. I absolutely love her makeover and how it captured her fun personality. Cruella de Vil joined us at makeovers today, oh wait, that’s Shei. Winner for most unique makeover goes to Shei. I felt like I needed to run around Los Angeles and grab her some Dalmatians for her upcoming clothing line. Why oh why did they mess up my boo Kari like that? I had edgy unique model turned Lady Gaga right before my eyes. I did not hate it but I also did not love it and felt so bad for the massive transformation Kari was going through. It’s like looking in the mirror and not knowing who you are looking at. Chantelle got an amazing weave that matched her skin to the T. The bros got buzzed! Adam got more attractive, Ben got less attractive. Ben is still my crush though. I am obsessed with my makeover. I got that model look that I needed to boost my confidence in this competition. Sleep with one eye open y’all, Will is here to fight.

Who are you? A question I ask myself every day, but now I get to know the answer. Genetically that is. We are participating in ancestry.com DNA analysis which can tell you which parts of the world you come from! How cool is that?! I’m thrilled to learn about where I come from. There is so much more than what meets the eye about all of us in this competition and knowing your history allows you to see us on a new level.

Which parts of the world do you think everyone comes from?

The kiss that launched a thousand rumors.

Oops, I kissed Matthew. He may say there was nothing to it, but there definitely was *wink wink.* The kiss was a dare that we both don’t regret, but I think the backlash we received was unexpected. It bothers me so much when people judge things they can’t understand. The quote that hurt the most was Mirjana saying, “That’s super gay.” While it may be gay, the term becomes derogatory and doesn’t help with the situation of the LGBT community. I felt for Matthew, because the backlash he got was what I went through my entire life. People judge things they don’t understand, and it hurts people more than they know. I could care less what everybody else thinks though, I got to kiss the most attractive boy in the house and he got to kiss the most attractive girl, me!

No one wanted to go home, but ultimately someone had to. Overall everyone did a kick a$$ job on this shoot but with no challenge scores the nerves were elevated. The three best photos that I saw this week were obviously Ben and Lenox but also Matthew’s. This picture for me made me see Matthew as a stronger competitor in the competition. Who didn’t give me life? Romeo, Denzel, and Chantelle. Those three pictures to me just didn’t cut it and I think the judges got the scores spot on for all three. Chantelle has so much more potential than what she was delivering in this shot and Romeo just couldn’t capture the illusion that they were looking for. Who stays in the competition? I do, that’s for dang sure! Praise Jesus, Hallelujah. Then there is Ben with his well-deserved best photo. Kari and Chantelle end up being in the bottom two and I remember standing there and under my breath saying, “Kari, Kari, Kari please stay.” Numbers flashing, eyes closed, and silence, Chantelle is sent packing. Bye. girl, catch you later! Kari gets to stay in the competition and I couldn’t be happier!

A few notes. What decade was Miss J’s hair from? I’m surprised it wasn't mentioned. Did anyone else get extremely freaked out by the Satan circle Romeo created? Let me just say that I didn’t go outside for a while when I found out what he was doing. How do you feel about the Matthew, Mirjana, and Denzel love triangle? I can honestly say that I do not care what you do with your emotions but I’m going to pass you up in this competition if you let it get in the way. Watch out! Shei has a lot more in her and I’m excited to see what the season holds for her as a model. It shocks me that for the past two weeks she has been in the bottom. Keith dropped down a notch and may finally be dethroned in the competition. Don’t let your confidence get the best of you, boo. I remember walking into the bathroom and finding Matthew on the floor after our little house party. That child enjoyed himself maybe a little too much.

I loved every second of this episode and now a dozen is all that remains. Time is flying by and it’s time to hear who your favorites are. Comment below with who you love, hate or want to be friends with. Be sure to tune back in next Monday for an all new episode of America’s Next Top Model Cycle 21 airing on the CW at 9 PM EST. Then, go head back to NYLON.com on Tuesday to scroll the official recap according to me for even more inside details about the newest episode. In the meantime, follow me and my fellow housemates on Instagram and twitter!