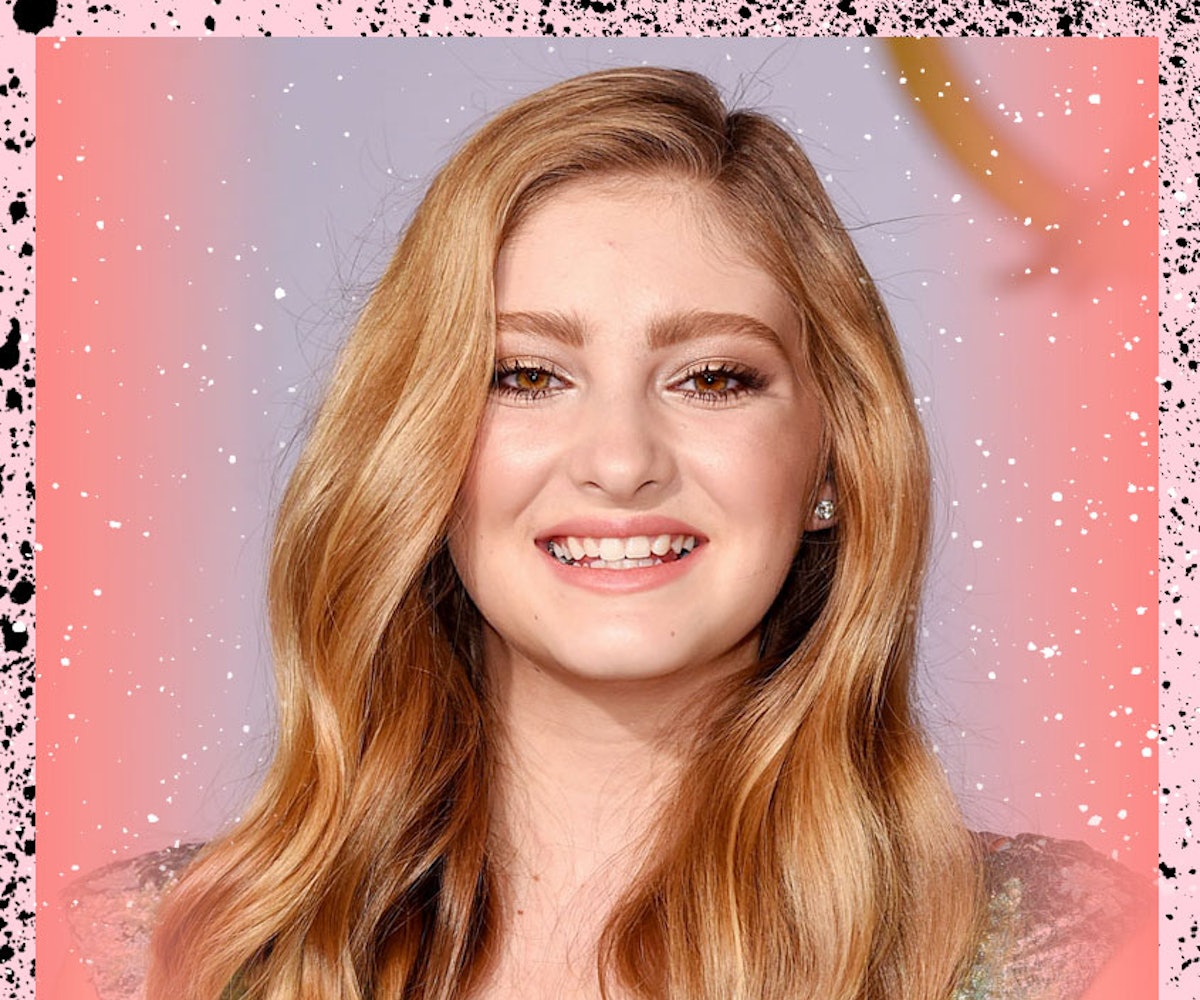 From the moment Effie Trinket pulled Prim's name out of that grim glass bowl, it was clear that our lives would never be the same. Through the entire The Hunger Games series, readers and viewers have grown with Katniss and Prim, seeing their relationship play out in curt vignettes. In The Hunger Games: Mockinjay Part 1, viewers get to see more of Prim, as she becomes Katniss' rock in District 13. At only 14, Willow Shields somehow manages to relay both the emotional maturity and innocence of her character with the skill of a young Dakota Fanning.

How do you view this new film in light of the previous two?

I love this new film because I think that it’s different because you don’t have the actual Hunger Games going on in it. I think that this is very interesting because you see the point that Suzanne Collins is trying to make throughout the entire series and that is: 1.) Katniss is a fighter and 2.) that their world is a crazy, harsh world and I think that you get to see that rebellion starting which is very exciting. Mockingjay is my favorite book, so for me it’s exciting to finally see it on screen.

This film touches more on the deeper issues of the saga like war, love, friendship, and independence. How do you think the director, screenwriters, and cast brought these key issues to the forefront of the film in a natural way?

As an actor, we really discussed not going too far with the emotions and making them subtle and therein true to make it all seem real. So seeing Jen’s relationship with Peeta, then her relationship with Gale, and her friendship with Effie... I think her relationship with Prim is one of the most beautiful because you can truly tell that she loves her and she knows that and that’s one of the only things she’s certain of—throughout this entire series, Katniss is still trying to figure out who she is as a person and the only person she’s sure she loves is Prim. I think it’s interesting to see her becoming who she is throughout all of this while fighting a war. It's crazy.

You’ve been in more scenes in this film than in the previous two films. How was it to be on-set more and to have a larger role?

I loved it. You see this relationship between Prim and Katniss and you see a lot more of Prim in the way that she grows in throughout the series. I think she’s one of the characters that evolves the most in the way that she starts off as the "little duck" and evolves into this stronger, independent person that I think even Katniss relies on a bit in Mockingjay, which is interesting to see.

As much studying as you can do for this type of character—I think re-reading the books helped a lot, but having played the same character for four years, you really get to know and understand that character (which is awesome) and you get to grow with that character. I’ve gotten older, more independent, and a little bit stronger personally as well. So, I was able to bring a little bit of that to Prim naturally because I myself have gotten older and you grow with that character. There are other things you have to work at to bring out.

In Mockingjay, Katniss realizes she’s a pawn—what she thought were her own decisions, she realizes were what other people wanted her to do. How do you think that effects her character and how is your character straightened her?

Katniss is so unsure of what people want from her and unsure of she should do. You can tell that people want her to be their symbol of hope and her to fight for them because they know she can do it. She just doesn’t know she can do it and Prim is the one that convinces her—so I think that’s very important to the story and I think that’s awesome to see that. Prim tells her that "yes, you are this pawn, but you know you still have you values and the fact that she knows she want to fight for these people, you’re just not sure if you have the strength anymore to do it.

Oh, gosh! She was so much to film with. Every day was so much fun and there was not one day that I didn’t not have a blast on-set. She was just all the time joking around; she’s so smart-funny that you say something that you’re like ‘You can’t make a joke out of this sentence that I just said’ and two seconds later, she’s got a joke and it’s a really smart and funny one. Every five minutes, it’s laughter exploding through the warehouse we’re filming in and I guess, it’s like Francis [Lawrence] would say: Its wrangling a punch of little kids or puppies to work—it’s very difficult.

I heard she really turns it on once they call action.

Absolutely. She’s made it very hard for me to work on-set because I feel like her life goal is to make me laugh in an emotional scene. And she can so easily go from laughing to crying so quick, like this [snaps]. It’s very amazing to witness that but it’s difficult to do. A lot of other actors were even having trouble with it to because she’ll tell a joke right before they say action on purpose to try to get everyone to laugh. And she’s done a pretty good job at it, but we’ve kept in character for the most part.

Have you tried out the whole method-acting thing?

Did you have any techniques that you used?

I think that when you get on-set and you start filming—and working with Jen, specifically Jen, and the other amazing actors—it all just works and comes together. One of hardest questions I ever get asked is, ‘How do you cry?’ I have no response to that at all. I have no idea, it just happens. I think a lot of times you get in the moment and it works. And I think that working with a great cast every moment is like that, so I mean we don’t do much preparing because Jen is so amazing and everyone else works so hard it all comes together perfectly.

Did you read the series before you signed on for the film?

I was 10 and my mom was like, ‘Okay, you can read them.’ So I started reading them with my sister and then I got the email literally in the middle of reading the book and they’re like ‘Oh we want to audition for the role Prim’ and I was like ‘Oh, I know who that is!’ It was really out of the blue and extraordinary.

What was your reaction when after you read the third book?

The reaction was ‘Wow that is heartbreaking’ and I think that's the same for anybody who’s read the book. Throughout the whole series, I feel like Prim is the light throughout the series. You know Katniss volunteered for her in the first film and throughout the entire series it’s her goal to protect her little sister and then for [that] to happen, it’s heartbreaking for everybody. Suzanne Collins wrote that part in for a reason and that was to show the brutality of their world and for people to understand what happens in their world and in the Capitol they don’t really care about anybody but themselves. That’s something she needed to prove and I think she did prove that.

Can you tell us anything specifically about the next film?

No, not really. Not yet. The secrets are locked up but it’s going to be amazing. I haven’t seen it yet, it’s not finished but we are done filming it.

There’s been speculation about whether there’s going to branches like films about Panem after the Hunger Games films. I don’t think anything’s been confirmed or thought of but what’s your opinion of it happening?

Honestly, my opinion of it is that if Suzanne Collins wants to write another book, I think it would be amazing to make a film out of it, but other than that nothing else would really live up to the fans’ love for the series and the characters and the whole story.

The soundtrack to the new film is amazing.

I’m obsessed with Lorde so I was really excited when I first found out she was doing a song and then I was like, ‘Wait a second, she’s curating the soundtrack? Mind blown. Oh my gosh!’ I really hope I get to meet her at some point and I got excited when she tweeted me actually—I tweeted when I heard “Yellow Flicker Beat” on the radio and was like 'It sounds amazing' and she tweeted me back a kissy-face Emoji and I was like, ‘Whoa, this is awesome.’

When you do meet Lorde what do you think you’ll say to her?

I’ve never really fangirled over meeting someone, but I honestly think that she’s one of those people that I would just be very overly excited to meet. And I’m not necessarily into music that much, but she’s one of my favorite artists. I think she’s a very smart girl and I’ve seen interviews of her talking about the soundtrack and she really knows what she’s talking about and I appreciate that. I think she understands the series just as much as the actors do so hearing that and seeing that is wonderful and knowing that the person curating the soundtrack really understands the whole series.

Are there any other books you’re reading at the moment?

I’m reading Palo Alto right now and I’m reading The House of the Scorpion for the third time now. I’ve read it twice before because I loved it and I’m reading it now for school. So those are the two books I’m reading right now. Sometimes I read three or four books at a time but I’m a big reader. If I’m on a plane I can read a book and I’m good, I’m set.