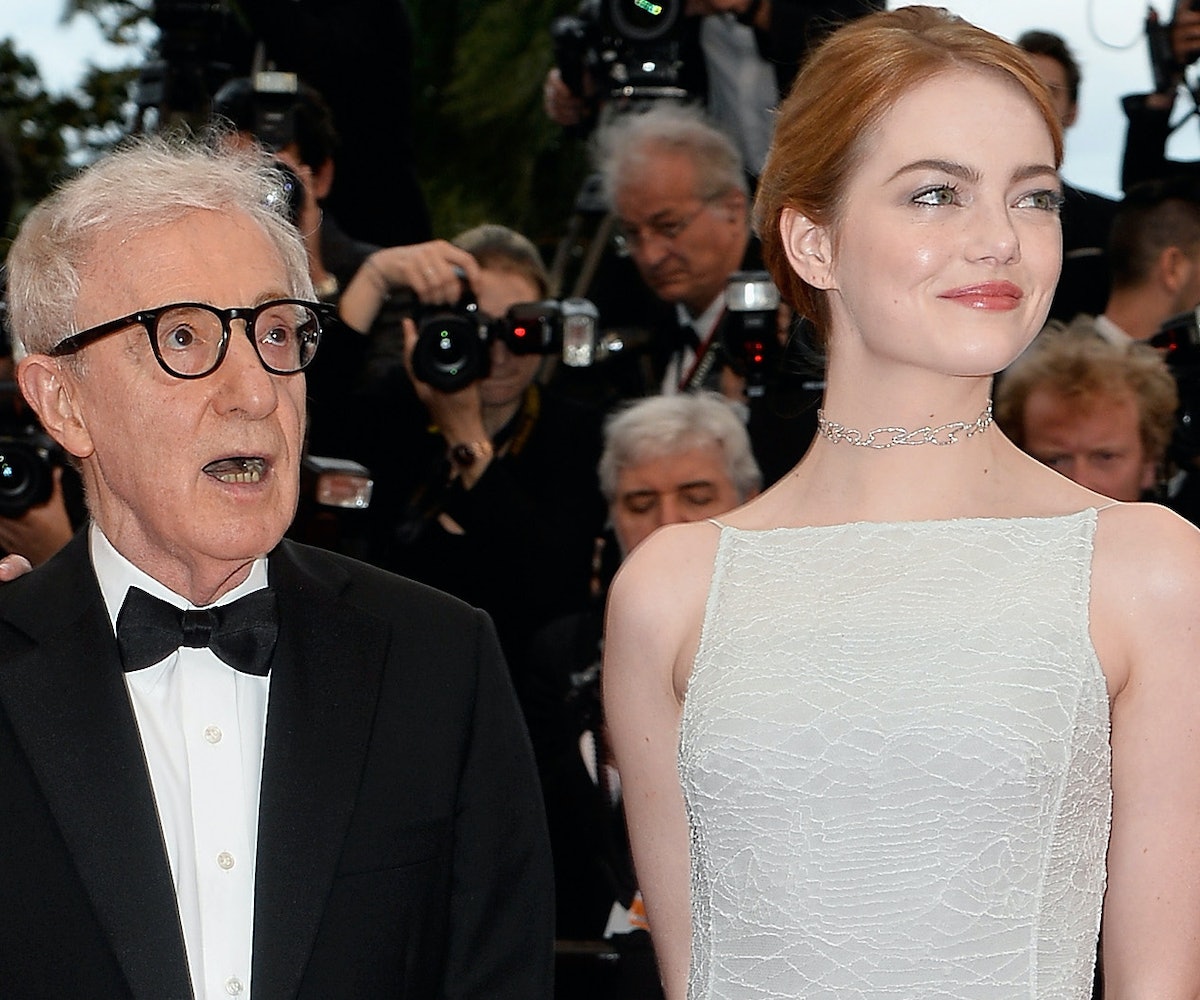 Tomorrow, Irrational Man, a film directed by Woody Allen and starring Emma Stone and Joaquin Phoenix, comes out. And, somehow, no one is discussing the only part of this film that unfailingly sticks in my head.

Last year, during the Golden Globes, when Diane Keaton was presenting the Cecil B. Demille Award to Woody Allen for his celebrated and prolific career, Ronan Farrow threw the ultimate shade, tweeting, "Missed the Woody Allen tribute. Did they put the part where a woman publicly confirmed he molested her at age 7 before or after 'Annie Hall'?" His mother followed suit and suddenly the allegations of 1992, where Dylan Farrow told her mother and several doctors that her father Woody molested her in her own attic, became public headlines once again. A quick recap: Allen and Farrow were involved in a brutal custody battle for their children after Farrow found naked photos of their adopted daughter, Soon Yi. There was an investigation, but no formal charges, and the investigation was just inconclusive enough that it is clear no straightforward answer will ever arrive.

The truth is this: A woman named Dylan Farrow—who has since changed her name and has opted against living in the public eye—

says that her father molested her in an attic

. My personal belief is that we should always listen to victims, full stop. The extenuating details are circumstantial but nonetheless spooky; Allen has a documented history of sexualizing family members, a continued fascination with young women, and troubling remarks from authority figures surrounding the case. (The State Attorney reviewing the case

decided against prosecuting Allen not because of lack of evidence

, but because of fear of continuing to traumatize the child.)

But that is just conjecture—but conjecture that feels particularly problematic given Hollywood's continued compliance in the sainthood of Allen, and the pass we have collectively appeared to have given him.

When this first bubbled up, one of my dear friends Kelsey Miller

wrote a spot-on piece about her own issues

, as someone who found her childhood colored by the wonder of

, and is now a grown-up feminist who has dug into the details of the case. She wrote: "So,

we still love the work of Woody Allen? For me, the answer is an uneasy "yes."...So, I think we can still love the work of Woody Allen, but under one condition: This part of his story is told. No more burying the bad beneath the slightly less bad." What Kelsey was asking us here was not to ignore Woody's contribution to cinema, but instead we can't lionize the artist like we once could. The solution, then, is to add an asterisk to his narrative and remember that sometimes creative people can apparently do things like put their fingers inside of their daughter, whether that makes us wildly uncomfortable or not. And what is surprising to me now is that said addition is so wildly—and willingly—ignored. (

For this round of press, reporters have danced around Emma Stone's most recent film with an adroitness that is borderline alarming.

In her a recent interview promoting her movie

, Stone effusively praises Allen, saying, "I can certainly tick it off on my bucket list and the experience of working with him couldn’t have gone better." That's all that the piece mentions. A recent clip of Emma on

has her telling a "charming" moment about

, which has perhaps been the biggest news item coming out of the

press blitz. Meanwhile, Stone certainly is capable of introspection, and the press didn't shy away from asking her about the controversy of her being cast as a half-Asian character in

, when she sheepishly added, "I am the butt of many jokes."

And it is disappointing, because I

Emma Stone. She has been on our cover, and has done wonderful things for women in film. Cate Blanchett had a similarly difficult situation when she won her Oscar this past year, and handled it well enough by politely thanking Allen and leaving it there. Cate was cast in his film before the controversy resurrected itself, but Emma was not, which is troubling. And what is also troubling is that this conversation has once again subsided, leaving nothing behind other than

a letter from a woman

who was once named Dylan.

Hollywood does not like to look at its own demons, and it is a side effect of the celebrity worship we all participate in (me included). The entire industry sidesteps the dark history of some of its most notorious characters: Sean Penn, Alec Baldwin, and

to name a few (though, none of these people have ever been accused of child molestation). But with Allen's artwork nested so closely to his real-life experiences (less so, of course, in the recent years), his films are now imbued with an insidious nature—and it's a shame when young women aren't at least

enough by the allegations made by Dylan, in her new life and with no career to guard, to at least reconsider sculpting their career as "Woody Allen's muse."

As Kelsey told me in a recent conversation, "I can't un-love

, but I can't enjoy it anymore. And it’s our personal decision whether we want to value the art over the man." I can't ask Emma Stone to make decisions based on Dylan-in-the-attic's words, but I would at least hope she—and all of us—won't forget them.