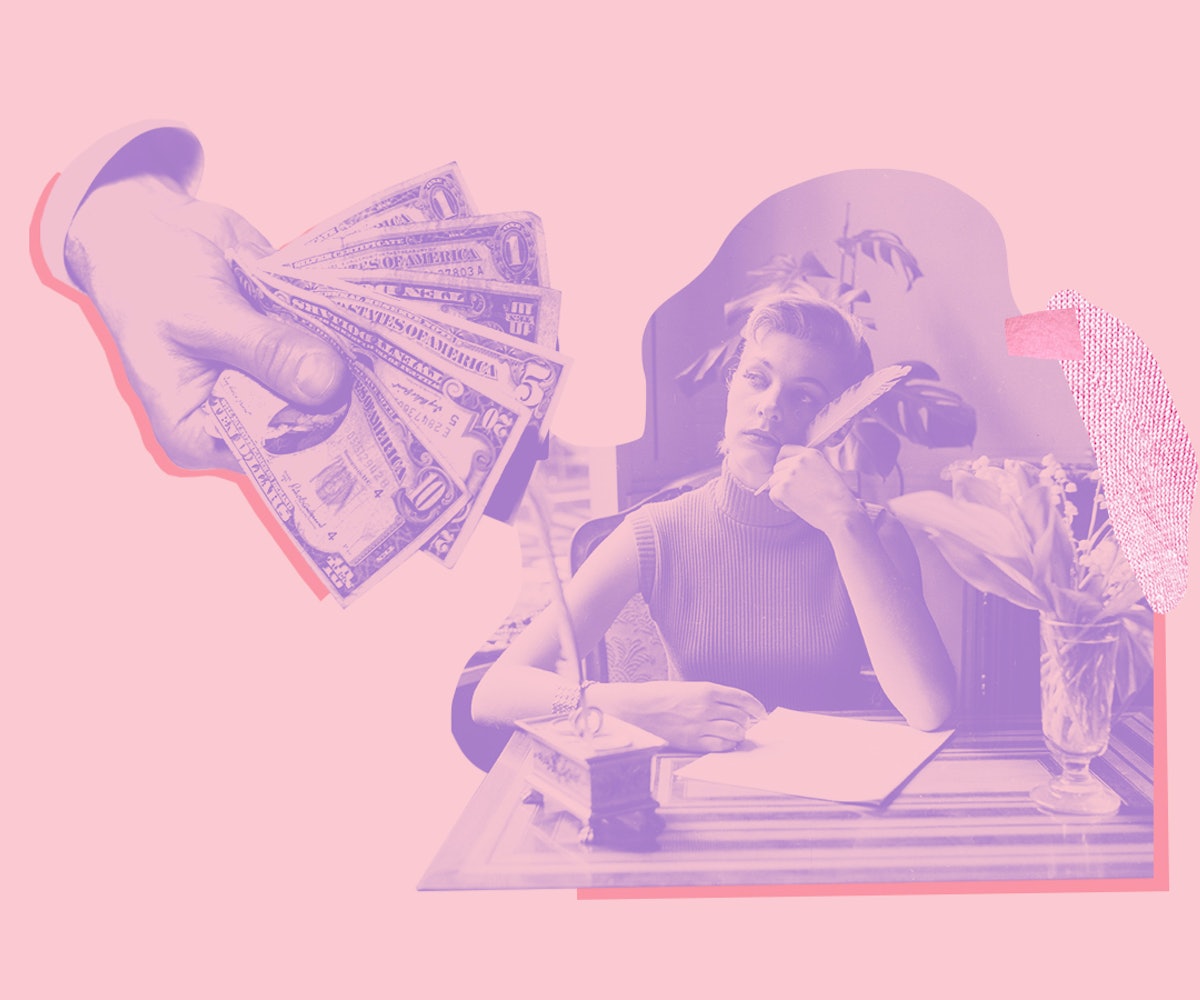 Few topics of conversation are more taboo than money. Okay, maybe politics, but still, money is a particularly fraught topic of discourse. And this is particularly the case when it comes to the money earned by those in creative fields. There's myriad reasons as to why that is, but perhaps none is so powerful as the fact that creatives are thought to be living the dream of doing what they love and also making a living from it. This naturally inspires some feelings of envy from those both out- and inside the creative world. And it also inspires some questions; some very delicate questions, the kind that can be hard to ask of people whom you don't really know that well or, you know, at all.

And yet it is especially important to have transparency in creative fields, because these are not industries that have any sort of inherent structure or standard. It's totally possible for one writer to be paid literally nothing (other than "exposure") when writing for a publication, while another writer earns a dollar a word, or more. In an effort to bring a greater understanding to the way the publishing and media worlds work, writer Manjula Martin started two websites a handful of years ago. One, Who Pays Writers?, is an ongoing tally of various media publications, the rates they pay writers, and the speed with which they do—or do not—send the checks; the other was Scratch, a now defunct and sorely missed site dedicated to interviews with writers and essays all about money.

After Scratch shuttered, Martin announced that she would be publishing a book by the same name, and the resulting collection of essays and interviews that includes writers like Roxane Gay, Cheryl Strayed, Kiese Laymon, Sarah Smarsh, Emily Gould, and Choire Sicha, is an illuminating look at the financial state of being a writer today. It is, at times, infuriating (particularly when it lays bare the inherent racism and sexism that still exists in the publishing world), often funny, and incredibly thought-provoking. Below, we talk with Martin about the impetus for this book, why writers always get advised not to quit their day jobs, and why it's so important to just buckle down and "do the work."

To start at the beginning, what was the reason why this topic interested you so much? What inspired you to launch Scratch? And Who Pays Writers?

I had sort of fallen into freelancing full time as a writer, and I soon realized that I had no idea what I was doing. There seemed to be no standards for pay. So I made Who Pays Writers?, which is a crowdsourced list of freelance rates—people write in with their rates, and I publish them anonymously. From there, it became clear that there was a need for more in-depth conversation and context. The numbers are great, of course, but people also wanted to hear the stories behind the numbers too. That's how Scratch happened.

Once you started talking openly about the financial aspect of a writing career, what kind of feedback did you get from fellow writers?

To my initial surprise, the feedback from other writers has been overwhelmingly positive. No trolls. Or at least not any big ones. I'm probably jinxing myself by saying that!

There are occasionally a few grumbles here and there from people who feel that this method of transparency isn't perfect (and it's not, nothing is!), but honestly it's been rare. It's so amazing to have other writers say to me, "Oh good, it's not just me!" The reaction has showed me that the hunger for knowledge about this aspect of creative work is very real. There's true solidarity around this conversation, and I'm constantly grateful for that.

Why do you think talking about money and creative fields is still so taboo?

Everyone has issues about money. Everyone.

We as a society tend to view art as magical, especially in America, where we pretend we don't have a class system. It can be tempting to view art and literature as things that just appear, enhance our lives, and that's that. Art is magic, but it's also the tangible product of real labor performed by real people who live in the real world, where money exists.

It's hard to fit art and literature into capitalism (although we've certainly been trying for at least a few thousand years!). Perhaps that's as it should be. But one result of this awkward dance between art and commerce is that sometimes people don't know what to do with something that exists both inside and outside of a transactional economy.

So with Scratch I'm just trying to bring those transactions, those complexities, into public view a bit more clearly and say, literature exists within, in reaction to, and alongside very real economies. Let's talk about it.

It can seem like the reason that people (including writers themselves) are so fixated on the financial aspect of a creative career is because working as a creative doesn't read as actual labor to people in other industries. What do you think people outside of the creative world should know about what it takes to make a career as a writer or other artist?

Art is work. And the economics of art and literature don't just have an impact on artists and writers; it affects the work itself. When art suffers, our society suffers. If you value good stories, told by diverse types of people with different perspectives, in excellent but varied ways, you should care whether writers are able to sustain themselves.

One thing I find fascinating is how many people think of a writing career as an either/or situation, as if there's some clear binary attached. Like, you're either successful as a writer (because you're making money at it) or you're not (because you're not). And yet what the essays and interviews in your book prove is that there's no one path to success, and that, indeed, the end point is different for every person. Yet the binary persists. Why do you think people are so inclined to try and fit an amorphous thing like a creative career into such stark compartments? Do you think there will ever be a time when success in a creative field can be separated from whether or not the creative also has a day job?

Because we are humans and we crave easy answers! Seriously, though, creative careers are filled with so much uncertainty—we don't know how much we'll make, whether there will be more work, when that next check will arrive, if readers will respond. Creative work is also very personal; a failure at work can feel like a failure of something inside us, of our selves. And it's difficult to earn a living as a creative—especially as services and benefits for self-employed people are increasingly denied or threatened. All that can be legitimately scary, and fear leads to a desire for simple answers. Who wouldn't want a simple answer?

Binaries like "never quit your day job" or "never have a day job" can sometimes be true, certainly. These types of "rules" may help soothe anxiety, initially. But they also create it. I can't tell you how many writers I talk to who think, I'm not doing it right. Well, there's no right. There's just you, making your work, and figuring out how to stay alive while you do it.

Work, for writers and other creative folks, is not necessarily an either/or equation. We do it for the love and the money. That's not to say there are no clear boundaries around work. There are. It's just up to each writer to look at their lives and resources and needs and work, and figure out what their own boundaries are. No one will have your exact career.

I'd like to see the conversation move past "day job: yes or no" to talk about ways creative workers can organize and come together to actually change things in our industries. How can we make publishing more inclusive? What are some ways we can share information in a way that affects change at the top of these economies? How do artists navigate between art and commerce every day? We all have so many questions about this, and Scratch is the beginning of what I hope will be even more questions and debates about this topic in artistic communities.

Do you have any advice for young people who want to embark on a career as a writer?

Get to know your peers. Build community online, sure, but also get offline. Show up in person for the things you love and the people whose work you respect. They'll do the same, and the networks you build that way will serve you well in the long run.

Also stop reading those "10 ways to get an agent to notice you" and "top 100 productivity hacks for creatives" articles online. You really don't need them right now. The money matters, but not unless you do the damn work.

Scratch: Writers, Money, and the Art of Making a Living is available for purchase now.