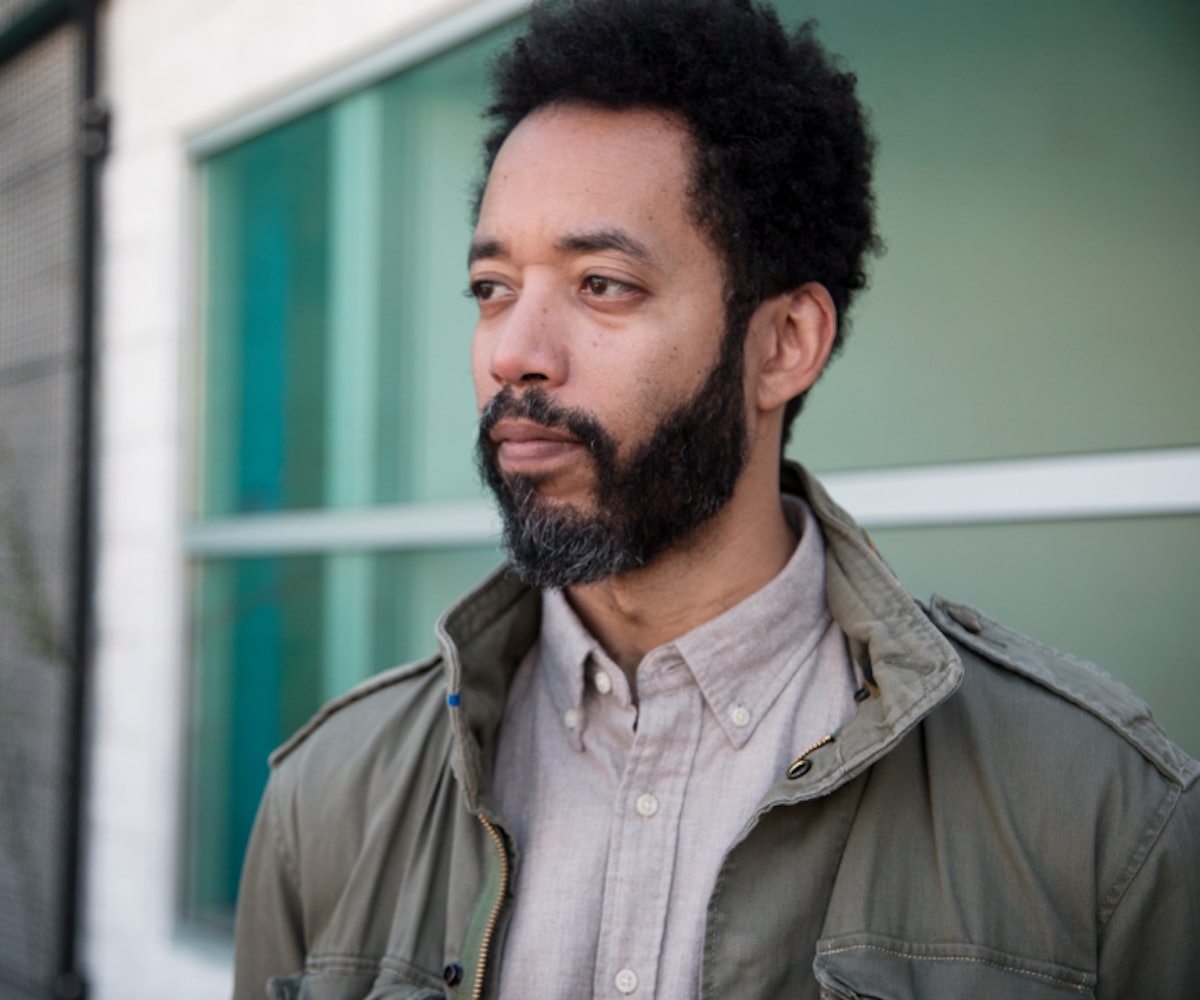 Wyatt Cenac has a great memory. Either that or he did some due diligence before we spoke on the phone recently about his new HBO late-night series, Wyatt Cenac's Problem Areas. Regardless, he greeted me with a surprising—and welcome—comment of, "We've talked before." Which, we had. About three-and-a-half years ago, I'd interviewed Cenac in front of his late grandmother's building in Crown Heights, Brooklyn, and we'd spoken about his childhood summers there, the best places to find roti in the neighborhood, and what gentrification can do to a place and its people. It had been a memorable interview for me, because Cenac had been so great to speak with—smart and funny and with impeccable taste in West Indian food. But he does scores of interviews like that, how memorable could it have been for him? And yet: "It's nice to talk with you again," he said.

This is the thing about Cenac: There's remarkably little pretense when talking with him; there's an intimacy that speaks not to some false sense of knowing one another, but rather to a refusal to engage in bullshit superficialities. It's an incredibly appealing quality, and it's one that's long been apparent in Cenac, throughout his career as a stand-up comic, actor, and correspondent on The Daily Show. And now, Cenac brings it to his own show, making for a very welcome addition to the late-night landscape.

On Problem Areas, Cenac speaks to audiences from a low-key studio (you feel almost as if you're in your home) about things like Elon Musk and the gentrification of outer space, but rather than simply talk about whatever news is happening in the moment, Cenac and his team have a bigger mission: They've dedicated the entire 10-episode season to exploring one issue, the state of policing in America. This means that Cenac spends a good amount of time on the show traveling around the country, talking to people who hold all sorts of opinions on the topic, people from all walks of life. It's an effective and affecting way of reporting—and a compelling look into one of the biggest problems facing our nation.

Below, I talk with Cenac about Problem Areas, why he chose to grapple with the issue of policing, and why we should all be a little skeptical of the altruistic nature of white billionaires who want to explore outer space.

It's an interesting time to be working in the late-night space, but what sets your show apart is that it doesn't have the sort of hamster wheel-feeling of trying to constantly be on top of whatever new scandal is happening on Twitter, or whatever's in the headlines at the moment. I was wondering what kind of challenges that presented in terms of planning out the show, or if you had any pushback where people were like, "No, you have to talk about Donald Trump."

No, no pushback. No one necessarily is putting pressure upon us to engage in the 24-hour news cycle at all times and to be that reactive. I think, for me, the idea to not get caught up in the news cycle, that was something that was deliberate for me, and for Hallie Haglund, who is an executive producer and the head writer on the show. For both of us, we worked together on The Daily Show, and you get worn down from news cycle-chasing, and, I think for us, we wanted to figure out how we could do a show that's isn't so reliant on that. I think the challenge of it is, obviously, there are things that are gonna come in the news cycle where the feeling is, "Oh, everyone is gonna have to talk about this." I think that there will be those feelings and that anxiety of, "Oh, should we be talking about it?" But I think we try to counterbalance that by finding subjects that we felt people would connect with, and I think by doing something like tackling one subject over the course of a season, hopefully, people will be invested in those stories.

What made you decide that the one issue you'd cover over the course of the season would be policing? There's an irony to that choice, in that it's both completely relevant and of the moment, but also, like, when has the issue of corrupt policing not been relevant and important to explore? It's great because it doesn't seem like merely a time capsule issue; it's been around, and it will be around. But also, like, you can explore it in a time capsule way, with what's happening right now. What were the challenges in tackling such a comprehensive national problem?

We toyed around with a few different ideas and policing was one that we were entertaining, and I really have to give a lot of credit to HBO and Nina Rosenstein over there [for supporting it]. I think for us, when we started talking about it, the challenge was, "Well, we're gonna spend 10 episodes on this. Are we gonna be able to cover everything? Are we gonna be able to say everything that we want to say?" And there was no pressure that we had to be the encyclopedia for all of policing.

Thankfully, once we started digging into it, it was: Let's find the stories that are interesting and kind of put forth the narrative of looking at the problem, kinda like what you said, in this time capsule, in this moment, and looking at it from a few different perspectives and a few different angles, knowing that we're not gonna cover everything, that we're not going to solve everything, and that's not the intention.

The intention really is to be able to engage in something beyond the polarized conversation that it seems like is always being had around an issue like policing, that never really gets beyond that polarizing conversation and digs into, like, how does change actually happen? What can change look like? For us, I think, having the support from the network and going into it, it felt like, "Yeah, there are obviously a lot of challenges with a subject like this," but it felt like we were going into it knowing that we were kind of supported on the way in. And it is one of those timeless things that people have been talking about for decades. With how they're having that conversation now, there are similarities to how it's been had a decade ago, two decades ago, three decades ago, and there are new things. So to be able to talk about all of that felt interesting, and it felt interesting to all of us in the building.

How is it working in this format without a live audience? I, personally, found a real intimacy in watching the show, knowing it's just you talking to the camera. There's no waiting for the audience to hear the joke and laugh or not laugh. Why did you make that choice for filming?

It definitely was a desire to make the show for the person who would be watching the show at home. I don't want a studio audience to be the ones to tell them how to feel, to tell them when to laugh, to tell them when to be angry or sad. Watching something is a personal experience, and I think watching something that is dealing with a heavy subject matter, it's a personal thing. And so I liked the idea of doing that, and I think as we started to then think about how to style the look of the show, we brought in a set designer, this woman Maggie Ruder, she really did a good job of trying to capture the spirit of what we were going for, and created something that felt more intimate, felt more connected with the viewer, to give them a show that is their show. It's for them to watch.

You also spend a lot of time out of the studio. How was it for you incorporating traveling around the country into something like this? Did you draw from your experiences from traveling to do stand-up? Or from doing field assignments on The Daily Show? It felt really different from those, though, which always felt more pre-determined. Your show feels far more spontaneous.

I think, to your point, the field element of the show is different than what I did on The Daily Show, and the approach is different. I think with The Daily Show, we kind of went out knowing the story we wanted to get, and [with] this, we have an idea, but the story evolves and it changes. What has been really great in shooting something like this, is I have a producer, and a researcher, and a camera crew that travels with us. In the past, it was just usually a producer and myself. And so, as the story moves and changes, researchers are there on the ground, being able to talk to people.

I think, overall for me, looking at something like policing, it's such a polarized conversation, and it's one that gets sensationalized nationally when you see stuff on Fox News and people speaking in these hyperbolic terms. And the reality is that something like policing is very local, and a lot of the issues that we get sensationalized on those 24-hour news networks, they're local issues a lot of the time. So the issues in New York are not the issues in Oklahoma, they're not the issues in L.A. And so, to me, it felt like, "Okay, if you're gonna talk about something, especially something as big and obtuse as trying to understand policing, [you have to remember that] there is no national network for police. There's over 17,000 different agencies, and they all do different things."

So the idea of talking about police reform, it's not like you reform one department and it sweeps across the others. So it felt important to be able to go into different areas and understand what are the issues around policing in this area and how do people address it and try to find answers to some of these issues. That felt interesting to me, because it also felt like, if you see how somebody else does it, if that's an issue, that exists somewhere else. You can say, "Yeah, why don't we have that?" And then ask for it. It changes the conversation, and it maybe makes the conversational update more nuanced and gives people more details and information.

Did you learn anything that you weren't expecting to learn from talking to different people around the country about this issue?

I think the biggest surprise for me was just seeing that there was more common ground than perhaps that national conversation gives credit to. It's interesting to go places and see that, at the end of the day, people just want to feel safe, and what that looks like to them varies... but that was encouraging to see that there is more common ground that perhaps I realized.

Beyond policing, you also talk about the important issue of white billionaire assholes who are now all about space travel. What made you want to cover that?

As we were talking about possible segments, it was one that I think, as somebody who has often times joked about things like gentrification, it felt a little bit in my wheelhouse, that space gentrification that's going on, and it felt like a fun thing to talk about. Everyone gets very excited about the idea of space travel, but... it's not going to be everybody that gets to go. [In thinking about how to change things for the better, we should be thinking]: "What can we do locally? What can we do in our own neighborhoods?" And maybe let's look at those things first, before we start hoping to woo a rich guy to take us to space with them, and to be a rich guy's space pet.