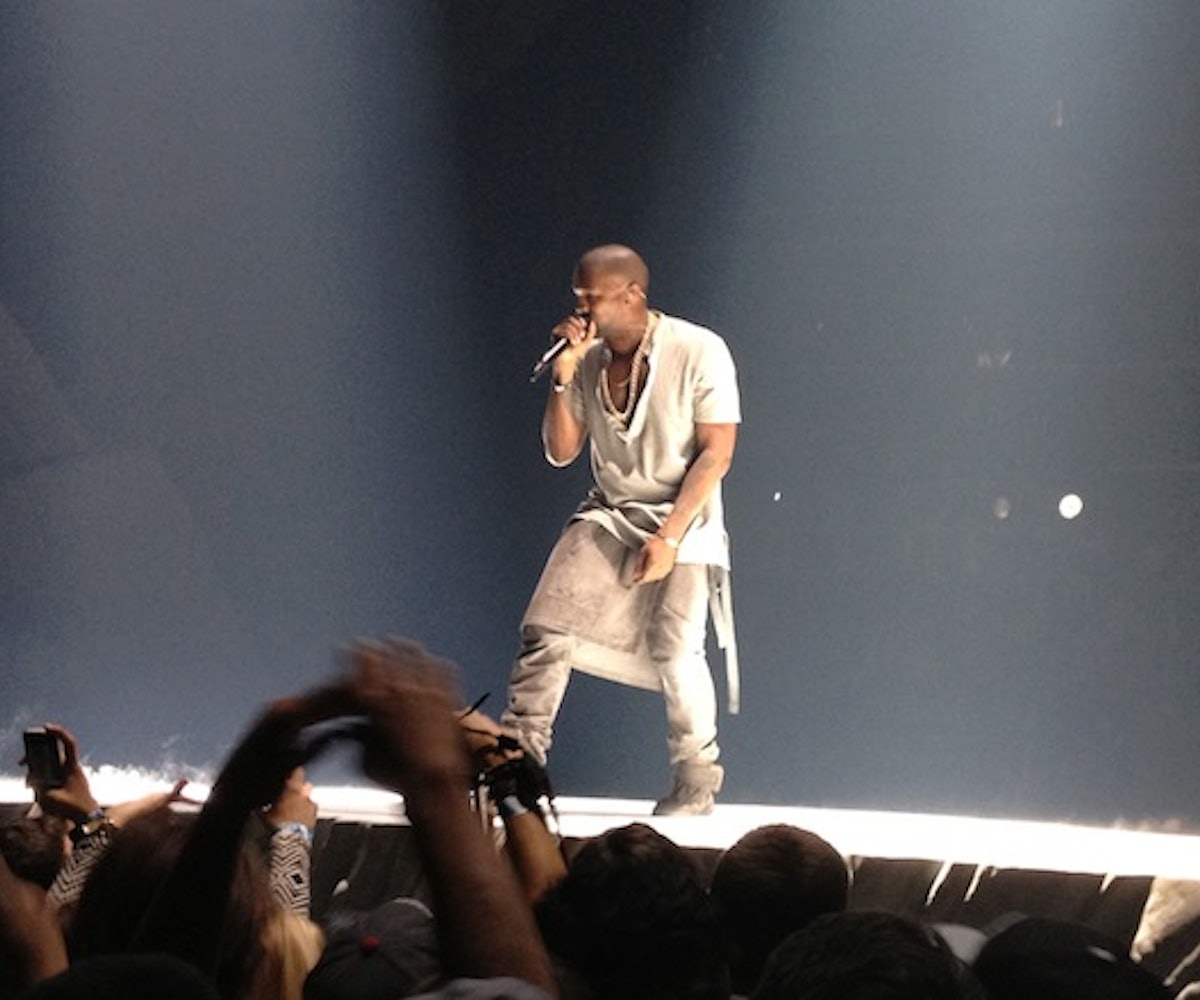 The capacity of Brooklyn's Barclays center is just over 18 thousand, and last night every single seat was empty because the entire crowd was standing. Wait, let's start at the beginning--we arrived on Atlantic Avenue to a half-a-dozen different lines all full of kids dressed in their freshest gear, ladies dressed to the nines, and fellas in their favorite Bathing Ape gear, Jordans and of course Yeezy's. The excitement for Kanye West's Yeezus show was such that it's almost as if there was music already playing as people of all ages were head nodding and stepping a little faster than usual. You know that Christmas Eve excitement, or that feeling you have the all day long on your birthday.

Thanks to our good friend

we got inside just as the sole opener Kendrick Lamar hit the stage and the hip-hop progeny did a great job warming up the crowd. Lamar, no stranger to riling fans with eye brow raising statements backed by eye brow-raising talent is a proper fit as a Kanye West opener. In all honesty, for an artist who's recently garnered a lot of attention for calling out other rappers, he seems like a nice enough character from the stage.

Five minutes before the Yeezus experience (experience really is the only word for this show) the lights are lowered and a white screen countdown clock appears everywhere. The nervous anticipation that swept over the crowd was such that it almost felt like hypnosis was taking place as everyone from Anna Wintour and Manhattan's fashion crowd who had made the Brooklyn trek to famous rappers and actors alike rushed to establish a vantage point. This extravaganza is unlike so many other concerts--for instance, throughout its entirety we didn't see a single person leave the room for "another beer" or to "hit the merch stand.'" From the moment the clock stops, every person in attendance is frozen.

We'll refrain from a song-a-log, and as you flip through the pictures you can see the outfit changes, so we don't need to describe that. Instead we'd like to paint the picture of what the sum-total of the Yeezus experience is lilke--simply put, this concert is like seeing Public Enemy, David Bowie and The Grateful Dead all at once. In exchange for the "turnt" feeling of animosity we expected, we instead saw nothing but smiles and not a single tussle or physical encounter throughout the presentation. The high art feeling of a Bowie concert meets the intense free-energy-festival feel of a Dead or Bob Marley show. The Kanye West on stage is less an opponent of the world at large and more of a motivator, a coach in the sport of "F the man."

As the time went on we noticed the sheer power in the fact that West doesn't show his face until the last 10 minutes of the show. For what it's worth, when the mask finally comes off, the crowd goes twice as wild, once again proving all the clothes in the world can't outweigh a household face. And as the show ended we couldn't help but think of the movie

while looking at all of the people filing out of the arena. Making our way into the brisk Brooklyn air and thinking of Kanye West as our generation's Mikey Walsh raising a fist-clenched coin and announcing "I'm taking this one back...It's our time down here..." as the world forms an opinion one way or another about him he leads us in search of our own place. And maybe those who don't understand just aren't Goonies, but Goonies never say die and the Yeezus campaign carries on.