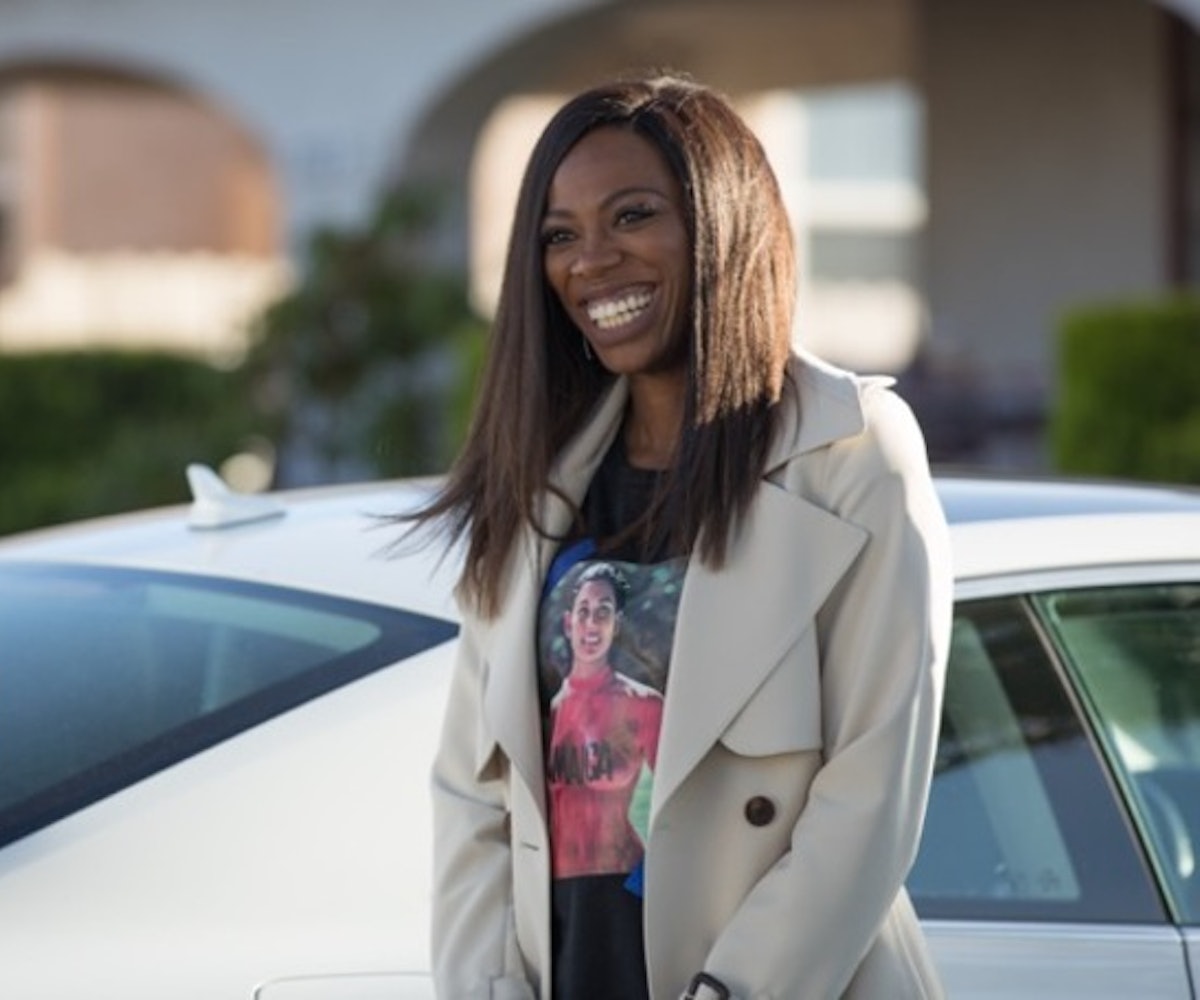 Yvonne Orji couldn’t be more different than Molly, the character she plays on HBO's Insecure. For one, 33-year-old Orji is a virgin and saving herself for marriage. She also doesn’t curse and is a devout Christian. Molly is none of these things, as is very much evident in the most recent episode.

We get a lot more of Molly and, in turn, Orji, on the second season of Insecure. We've gotten to known Molly as a hardworking lawyer looking for love, emotional stability, and equal pay in the often energy-draining environment of L.A. She’s best friends with the also lost, also (though newly) single Issa Rae, and the show follows them trying to make it through their 20s with their sanity and dignity intact.

Ahead, we chat with Orji about Molly’s self-sabotaging ways, dating while in the spotlight, and her forthcoming semi-autobiographical show.

A lot went down in this last episode; we saw Molly not only sleep with Dro but also find out her dad cheated on her mom in the past.

I think, when Molly got the shocker from her parents, that crumbled her. I think that crushed her, and I don't think she took the time to process that. In the heat of the moment, she probably should have gone home alone and processed it. But [instead, she thought], I'm upset. I can't believe everything I thought I knew about you is kind of a lie. Obviously, her parents worked through it, but just because your parents work through something, when you find stuff out, it's just like, "Wait a minute, what? Y’all are cool with this, but I need to figure this out for myself. What does this mean? I got questions." And I think, for Molly, it was just too much. What Dro proposed [sleeping together, despite his marriage], it's just like, who cares anymore? What is the sanctity of marriage? If nobody respects it anymore, Molly might as well just be with this dude who said he wants to be in an open relationship. I think that's where her mind was.

Twitter had a lot of feelings about it and one tweet that stood out to me was that Molly doesn’t want to be happy.

[Laughs] I got a lot of that. They were like, "Molly just don't care about her life no more. She don't want to be happy, she don't want nice things."

Do you think there's a chance this ends well for her?

I think that it's going to be rough. The same way Issa's not built for the “hoetation,” Molly doesn't know how to do casual right, because, for her, it's like, "I'm giving a piece of myself and what I want in return is feeling and emotions and for you to put my love on top."

I think, maybe if Molly was in a relationship where they were also open, and then you could have two people that are open being together, that would be fine, because then you can go back to your base. Like you go be with your boo, I'll be with my boo. But I don't know how this works because Dro has Candace, but Molly has Dro, so it's like Molly’s the only one being left out of the equation. So, I don't know how this works out for them.

I love how people are questioning the authenticity of whether or not Dro's telling the truth about being in an open relationship. Everyone's like, "Well, why is Candace mysteriously away?" And it's like, well, why doesn't anyone think she isn't at this bachelorette party, living her best life? Everyone thinks she's a victim, but why can't she be the man slayer out of these three? I think that's funny, the narrative is always one-sided, like, "Candace going to be mad." And maybe she will be, maybe she won't be, because this is like an old friend. I don't know what the rules are in an open relationship, maybe it's only strangers. You know, no one that you could potentially care about or like.

Are you team Lawrence or team Issa?

I'm for sure team Issa. That's my girl. We make mistakes, but that's what our 20s are for, to make some of these mistakes and figure it out.

A lot of chatter online also focused on the fact that people thought Molly was naïve to think that her parents' 35-year-old marriage doesn’t come with its bumps. I know you consider yourself a romantic, similar to Molly, do these plotlines—and the reactions that come along with them—make you jaded at all?

I consider myself a hopeful romantic, not hopeless. Because I feel like hopeless is just, like, you’re a sucker out here in these streets, it's not gonna work out for you. But I believe in love. I believe it's available; it's obtainable, and we can have it. And it can be exactly how both of you desire it to be. I believe it can have its ups and downs, but if both parties are interested in making it work and putting in the time to make this thing the best version for the two people involved, then, yeah, absolutely. I think love is beautiful and it exists, and it's out there. I always say, if I exist, then there's an equal and opposite. I don't know where he at, but there's a lot of countries and continents, so maybe I need to take a few more trips.

Molly’s had other sex scenes before, but this one was unexpected and very steamy. I know that there are certain things you will and won’t do when it comes to depicting sex on screen. Did you hesitate at all with this one?

Before [these scenes] even happen, you get all this legal paperwork and you have to sign all these papers, and then you talk to the director, and the director tells you exactly how they're going to shoot it, what they intend. So, you already know, there are no surprises. It's a closed set, so the director comes in and is like, "Are y’all doing all right? Are y’all comfortable? What's poppin’?" So it's never like, "Oh my god, we shot that? What?" It's funny because, if I saw this episode, I would be like, "Yo, that looks mad real, like, they're having sex." But, we're not. I have on a bandeau and boy shorts and he has on a cock sock. He's 6'8" and I'm 5'7", so he's really grinding on my kneecap, but they made it seem like it's real. Even that end scene where he goes down, the camera was on my face, and literally, he went down an inch out of frame and then stopped there. It was like my clavicle and then an inch below my clavicle, so that's TV magic right there.

This is random, but I came across this guy's Tinder profile recently and, in his bio, he wrote, “If this is Yvonne Orji, hit me up.” I know you’re not the biggest fan of dating apps, but if you saw something like that, would you swipe right?

[Laughs] Listen, I'm flattered by it all. What is so funny is I’ve literally been the same Yvonne Orji my entire life. I’ve been this chick who, two years ago, no one in L.A. is checking for. I have natural hair, I'm not "exotic-looking" enough for the men in L.A. who’re waiting for the next Blasian chick to get off the plane. It's like, I don't know how to not be African, what do you want from me? So, I think it's funny that it's like that, and I'm like, "Aw, that’s sweet, but where were y’all two years ago?" I take it all in stride. God bless him.

But no, I'm not on a dating app. I don't know how to work it, but I know people who have gotten engaged and married from Tinder. I think the thing is, regardless of the dating app, it’s about a guy who is ready to be committed and a woman who is ready to be committed. The same way you can meet that same person at the grocery store, I don't think it's where or how you meet them, it's about what part of their life they're in. But personally, for me, I can't do the app.

Is dating harder now that you're in the spotlight?

Dating for me is different in that I'm not dating just for company on a Friday night, I can take myself out to dinner. If I'm dating, it's like, no, I'm trying to get married. So, if that's not a desire in your heart in the next year or two, I'm probably not trying to go. We can go out and share a meal on some "you cool, I'm cool, this is just friends" type thing, but, for me, a random hookup, that's out the picture. When you check for me, it's more about coming correct, and that's what coming correct looks like. I think, because of that, a lot of people respect it in the way that's like, "Let's not waste anyone's time."

Before we go, I wanted to talk about your sitcom, FirstGen, are there any updates on that?

I hope we can expect it sometime soon, yeah, it is still a passion in my heart. David Oyelowo is like our great champion of the project and we're trekking along. We're in the development stage, and you know how that goes. It's a process and I'm very hopeful that it will turn out okay.