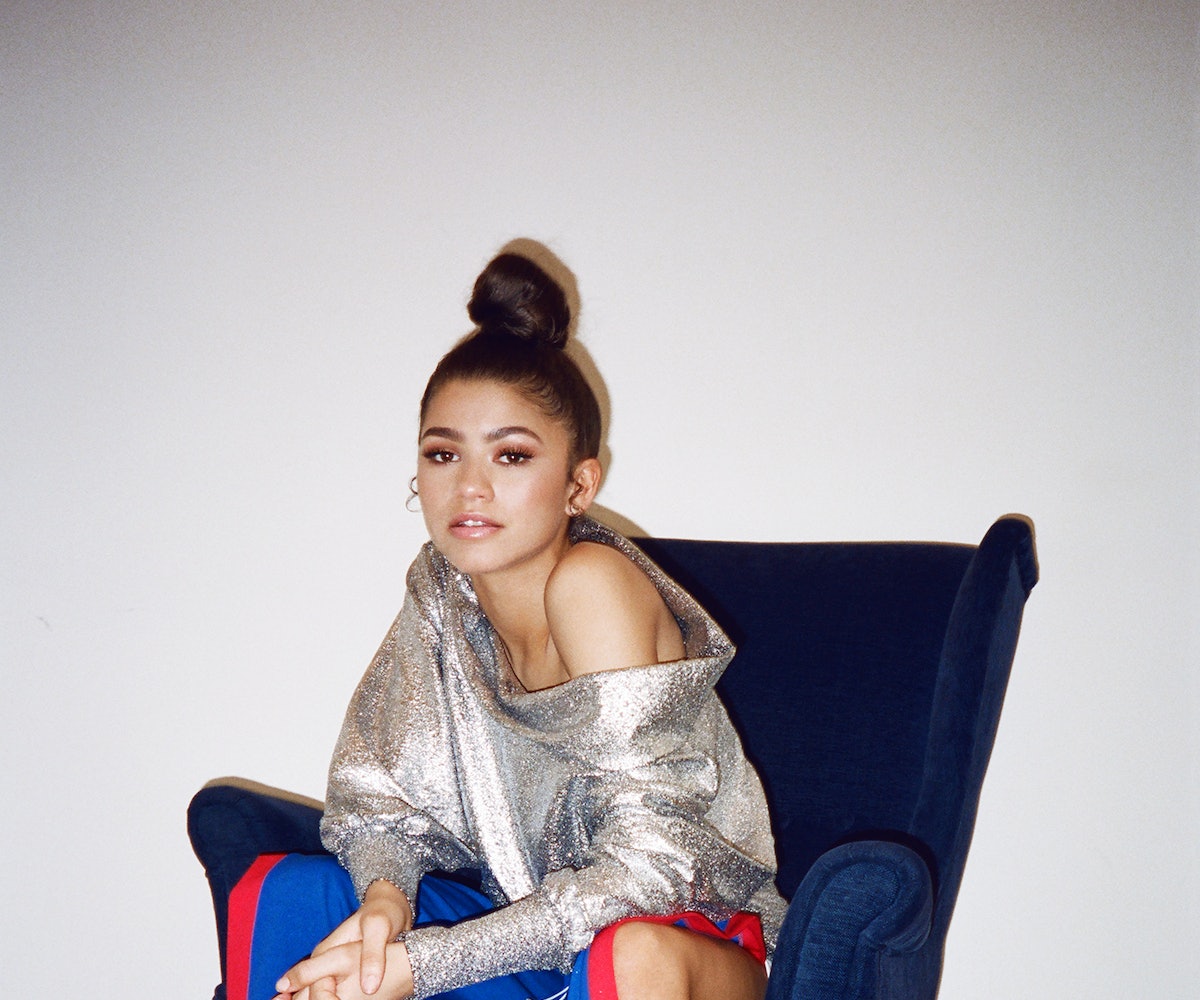 By now, you should already know everything about Zendaya. The 20-year-old actress is a household name and has expanded her reach from the safety net of Disney Channel to the status of one of the most radical voices of her generation. This year, she became more outspoken in terms of the major issues that are dividing the nation so drastically. Not only is the millennial holding people accountable for their lack of awareness, but she's also making a point to show that her actions speak louder than her words.

Last month, Zendaya was one of the many celebrities who participated in the Women's March On Washington. A few weeks later, the actress made headlines when her response to news of a body-shamed teen was to hire the girl to model for her clothing brand Daya By Zendaya. All of this might explain why Zendaya decided to team up with Verizon as a spokesperson for their national #WeNeedMore campaign.

The goal is to raise awareness about underserved communities and financially support schools so their students are fully equipped with the tools to pursue careers in science and technology. Essentially, the purpose of the campaign is to create access to opportunities that kids might not ordinarily be presented in the classroom while also providing them with all of the necessary resources. #WeNeedMore will also promote a year-long series of events and social activations for engagement.

We sat down with Zendaya to further discuss her hands-on involvement with the #WeNeedMore campaign. In addition to opening up about why the cause hits so close to home, she also told us about how she continues to grow as an activist. Get all of the details in the interview, below.

Why did you want to be involved with this campaign?I think immediately when they told me about it I was like, "Yeah, this is perfect." I kind of witnessed the power of technology in underprivileged schools because that literally is my mom's story. My mom has been a teacher for 20 years in Oakland [,California]—and not in the great parts of Oakland. Those underprivileged and underserved schools do not have the resources or the budget to have that type of access. We glamorize being a singer, a dancer, an athlete, and that's awesome, but most kids just say, "I want to be famous." What I saw through my mom bringing technology into her schools, [was] her opening a door that otherwise they wouldn't have been able to see—opportunities for themselves in other fields and in other ways.

[My mom] was just telling me about bringing in 3-D printers to schools. First of all, I had just recently seen a 3-D printer [and] I thought it was the coolest shit in the world, and I'm 20 years old. That's something that is so cool for a young person to be able to see, have it right in front of them, and be hands-on, like "Wow that exists. I can do that, I can make that happen." I think it's really cool, especially with how many tech jobs there actually are in the real world. It's a real world thing that they can achieve and they can get out there and do. So I think it's just kind of putting a spotlight on them and allowing them to be able to just open their minds.

STEM is a huge industry, but there are so few women involved—especially women of color—that most kids don't even think about having jobs in that field, especially young girls. When I was in middle school, STEM was such a boy's club.That's what my mom says. Many times, as young women, we're encouraged more to go the artsy route towards creative writing or something else, and that's awesome if you want to do it. It's cool to see not just diversity but diversity as far as gender in that field.

So what exactly does your role with the campaign entail?I shot a PSA and basically, the angle is "There's already me, there's already so and so, but we need more yous. Go after something that's for you." I feel like that's a powerful statement [to tell] kids. You could be the next LeBron James or you could be the next so and so, and it's always this celebrity or whatever. But to say to a kid that you could be the next you, that's powerful. You can create your own future and look at all these opportunities that are here for you and look at all the people that are going to help you get there. I think that's kind of the thing that's around what it is today. I think it's powerful and it's very much connected to what I personally have experienced again through my mom and both of my parents being educators. [I'm] raising awareness, but also, because I'm young, I get those kids who are in the programs excited about it and even more hyped up about the stuff that they're learning and they're into, knowing that I'm seeing them and I'm watching them and I'm encouraging them to keep going in that field.

How do you tend to stay informed about everything that's going on in our country?Honestly, right now, you can't really avoid it. If you do choose to avoid it, then you're just choosing to, because it's everywhere. You can't go somewhere or go on Twitter or go on wherever without seeing this crazy stuff. This is the world that we're living in, [and] you can't really hide from it anymore. I think that is also a good thing because it forces us to address the issues, and it forces us to be active with the issues.

Also, I follow a lot of really cool—I guess you could say woke—people that are very active and know what's going on. I like to stay updated. Even if sometimes the truth is hard to hear, I like to know what's going on as much as I can, and social media kind of helps with that. Twitter has definitely been a place for people to really raise their voice and say that we see that this is going on. We're not going to skip over that, we're not going to pretend like it doesn't exist. I'm going to tweet about it, and then you're going to retweet it and retweet it and retweet it, and then the next thing you know, it's trending.

Why did you feel that it was important for you to be speaking out about these issues?I think that that's something that I've just been raised with. I've told this story a billion times, but I remember there was one time when I was in school, and there was a girl who I guess got called a name or something like that in class, and I just watched it happen. I was like "mind my business" or whatever. My dad worked in my school—I was at the private school, and my mom was at the public school down the hill—and [my mom] drove up the hill, came with my dad, and knocked on my teacher's door. I guess they found out somehow through a teacher or parent or whatever that I didn't do anything about it [and they] pulled me out in the middle of the classroom, took me to the teacher's lounge, and I got cussed out because I just sat there.

And really, that's like silence is compliance. You not doing anything is basically saying it's okay. That's how I've always felt. I think it's very cowardly to have a platform and not do anything with it that's positive, because then what's the point? I just like to choose to take it as a responsibility and take it very seriously and try to use it for the best I can. Of course, there are times where I'm not going to be tweeting every five seconds about a new political event. Of course, there's going to be funny stuff, and I'm going to talk about what's going on in my life and movies and whatever is going on. But, there will always go back to the things that I think are important.

What has your experience with activism been like so far?It's been incredible. Again, I think it's one of those things where I just feel compelled to do these things. It's not somebody telling me, "It's a good look if you go show up at this this and this." This is my mom saying, "We gotta go." This is me saying, "We gotta go." I don't want to sit here and rant like, "Ooh, I'm going to be an activist today and do this this." You're drawn to those things and you feel like you need to ACT. Act upon what you see going on. I don't know, maybe I have a big mouth, which I never thought I did. I've always been shy, which is weird—so very shy, believe it or not. It's an unsettling feeling if I sit here on Twitter while everything is happening, and I'm just going to tweet about my new movie or my new project or whatever and just ignore what's going on. I mean, hello, you can't—you can't. Anybody who has a conscience.

Do you ever feel discouraged by the potential backlash?People are scared out of it because when that does happen, where you do act and speak up, of course, people aren't gonna agree with you. That's the whole point. Of course, people are gonna be a little bit against you and whatever. But as long as you're willing to open your ears to maybe even the negative comments—because sometimes you have to hear other people's side of things in order to change their mind or in order to see where they're coming from to make a better decision on how to help them get to the good side and to understand why things are happening the way they are. So you have to just be open-minded and listen and learn and all that good stuff, and not be afraid to speak up.