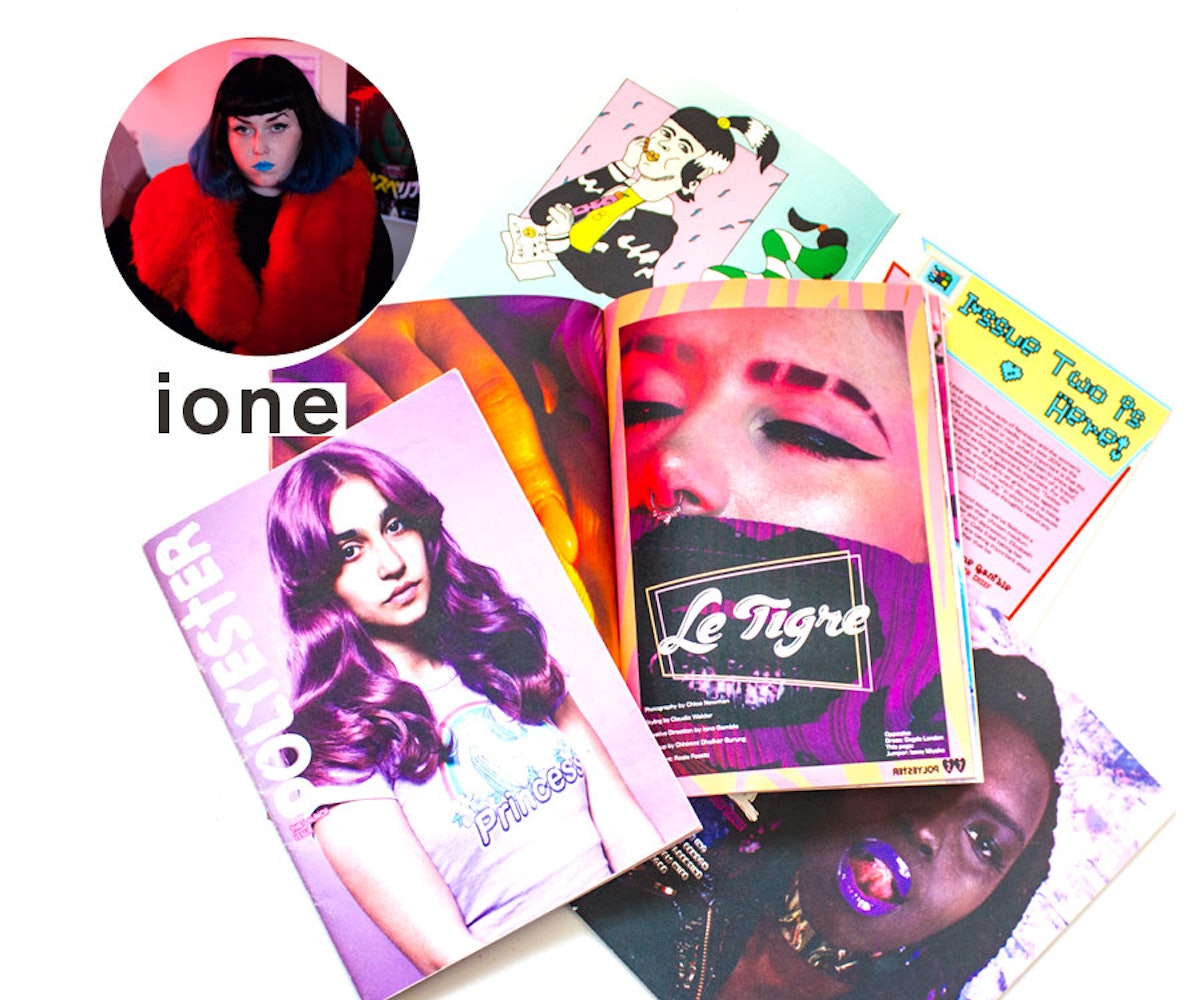 Self-published mags have long served as symbols of independence and creativity. Here’s how a few of our current faves came to be.

BEEN AROUND FOR: a year and a half

AVAILABLE AT: polyesterzine.com, Alt Space Brooklyn, the ICA and South London Gallery in London, and a few other worldwide stockists.

IT STARTED: as a university group project. Gamble was frustrated with the fashion industry’s tendency to “favor minimalism over any other type of design or subculture. As I saw it, the designers I liked, such as Meadham Kirchhoff, and the girls who I admired, like Arvida Byström, were just as intellectual and amazing, but their work was dismissed as faddish,” says Gamble. “I wanted to create a space where these artists and feminists were celebrated. I took the name from a John Waters film. Everything about his work inspired me to embrace my own weirdness—our tag line, ‘Have faith in your own bad taste,’ is also stolen from him. (Oops!)”

AESTHETIC: “We focus on trash and kitsch culture through the lens of the Internet and the female gaze. We love the garish and the saccharine. Nothing is too over-the-top, and with every editorial, I want to show people that what they are presented in mainstream media isn’t the only acceptable way to exist, whether it be shooting stretch marks in the most beautiful, sexy way or exploring how makeup can be both empowering and tyrannical.”

Click through the gallery to read about the rest of our favorite zines.

BEEN AROUND FOR: one year

AVAILABLE AT: zineclub.bigcartel.com. You get stickers with every zine and a handwritten reminder that you are awesome, courtesy of the EIC.

IT STARTED: on September 22, 2014, as a high school club. “I wanted it to be the opposite of the things I was seeing in the magazine world that made me sad and uncomfortable: exclusivity, predictable content, interviews that asked things that I didn’t give a flip about,” says Williams. “We had our first meeting on a Thursday and have met every Thursday since, at lunch in room 302.”

FAVORITE INTERVIEW: “Natalie Neal was so cool to talk to us when we were just wee ziney babies,” says Williams. “More recently, I was super excited to include an advice column by Tea Hacic-Vlahovic in Issue No. 3.”

ADVICE FOR ASPIRING ZINE MAKERS: “Zines are, like, the definition of ‘niche’,” says Williams. “That said, don’t just throw yourself into a corner! Just because you’re a girl doesn’t mean your zine has to be feminist, or deal with LGBTQA+ if you are part of that community. Do whatever you want.”

BEEN AROUND FOR: one year

IT STARTED: “in December of my sophomore year in high school,” says Riordan. “I was tired of getting rejected from magazines and wanted a place I could always share my work. So, I got a few friends together and we made a Tumblr account. I picked the name when I was reading i-D and I saw the word ‘crybaby’ in one of their articles.”

ZINE CULTURE IS: “always changing,” says Riordan. “While many people who originally made zines are against the current way the Internet is involved, I think it is so exciting. I love the way they did it in the past, and I’ve researched zines from the ’80s and ’90s, but the zines of today are just as exciting and cool. Zines can now exist in both mediums and I love that.”

BEEN AROUND FOR: three years

IT STARTED: “when I lived in an apartment building that was full of artists—filmmakers, painters, photographers, and musicians— everyone was always working on their projects and it was a lot of fun,” says Milbrath. She started the magazine when she realized that there was nowhere for her neighbors to showcase their work. “The name was kind of a joke. I wanted it to be like fake Vogue; ‘editorial’ sounds a bit professional, doesn’t it?” explains the EIC. “I like having that façade, considering the magazine is just a bedroom operation.”

FAVORITE INTERVIEW: Whitney Mallett’s interview with Hollywood stunt double Hannah Kozak. “Hannah is an eccentric, emotional, and creative person,” says Milbrath. “She is also a film photographer and documented the sets she worked on. It’s amazing to see the cast of David Lynch’s Wild at Heart just sitting around chatting between scenes. We put her portrait with Isabella Rossellini, who she was body-doubling, on the cover.”

ADVICE FOR ASPIRING ZINE MAKERS: “Be confident and pragmatic,” says Milbrath. “I didn’t have any experience in graphic design or even photo editing when I first started. If I let that stop me, the magazine would have never existed. Our first issue is full of typos and the font is huge, like for people with bad eyesight. But I don’t regret it. It’s important to put stuff out there.”

BEEN AROUND FOR: going on three years

IT STARTED: during Luckman and Fuentes's sophomore year of college, when they were “really into being on Tumblr and spending hella time together talking about all these creative ideas we had,” they write via e-mail. “We questioned a lot of our thought processes because of what we were learning in school, so we created a joint blog to express these ideas. Over time our visions evolved and we promoted Shade as a space for people like us to find and share work, and to address the absence of online zines for people of color that existed when we started in 2013.” Luckman and Fuentes say that the name of the zine pays tribute to queer ballroom culture of the ‘80s, but is not intended to carry the typical connotation of the word “shade,” which is often used as a sassy, coded insult. “‘Shade’ is representative of all different shades, backgrounds, and identities,” the girls explain.

ZINE CULTURE IS: “Tight,” the girls say. “Anyone and everyone can produce content, like a mini gallery that is affordable and mobile. Zine culture was rooted in the riot grrrl movement, which was not entirely inclusive. That’s why it’s amazing to see how this format has evolved and now encompasses a whole variety of ideas, movements, and artistic mediums.”