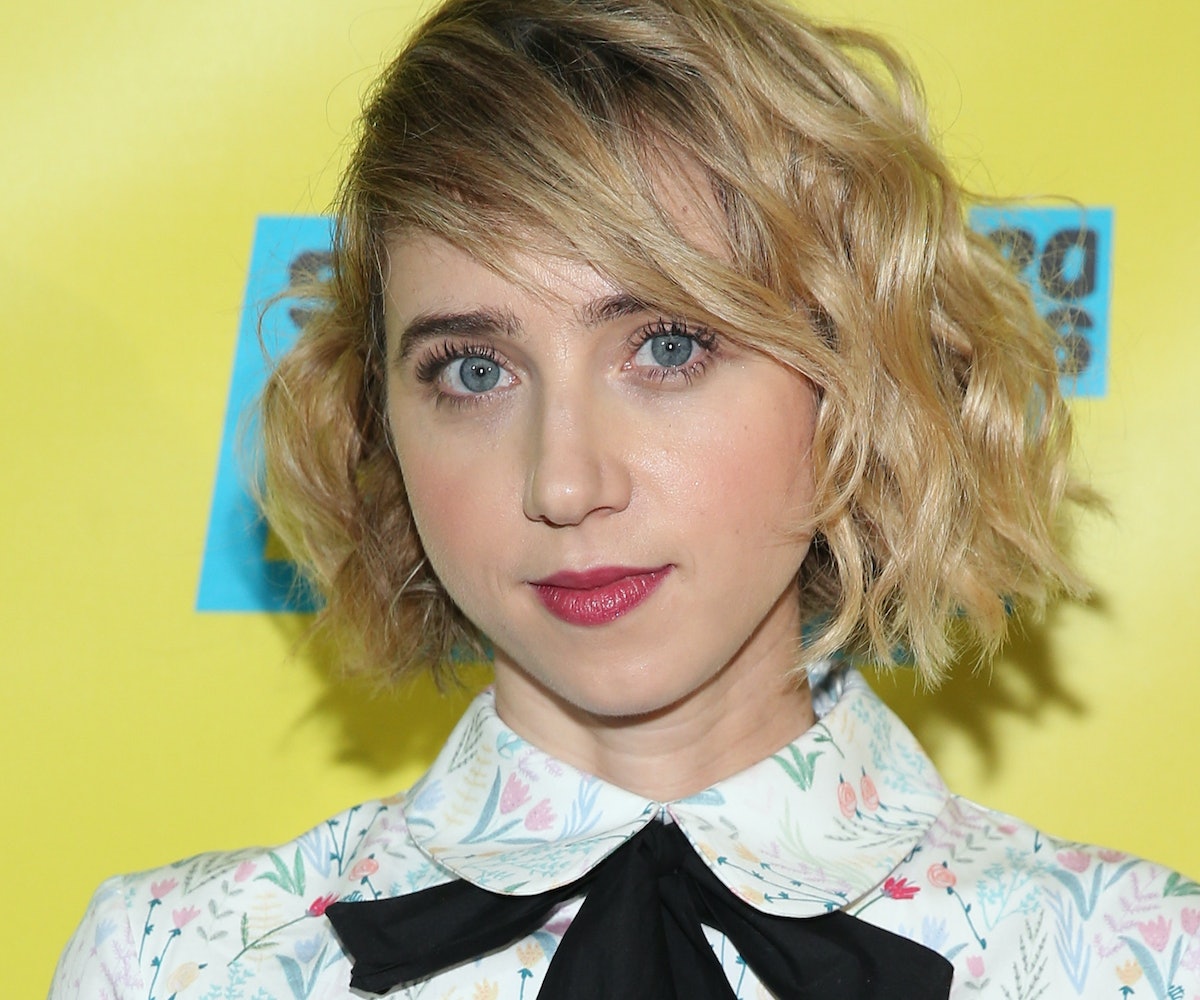 No matter which character she plays, Zoe Kazan exudes radiance and pluck, even if it's just in a supporting role, like the one she plays in the eccentric comedy, My Blind Brother. Kazan got involved in the film after meeting Jenny Slate through her boyfriend, Paul Dano, and the two of them struck up a friendship. That seems to be a trend with the 32-year-old Brooklynite, who became so close to Lena Dunham that the Girls creator asked her to lead her upcoming HBO comedy, Max, about a journalist in the 1950s who joins a women's magazine. We caught up with Kazan at SXSW where she was promoting My Blind Brother, to talk about growing up writing, her love for Lena Dunham, and going on a serious TV diet.

How did join this project?

I had met Jenny before. We were both on the show Bored to Death, and we had one day of overlap where we had a really nice afternoon. She moved to L.A.; we never really saw each other again and then she and my boyfriend did a video together in December. He gave her my number because he was like, "I think you guys would be really good friends," and she texted me, "Do you want to come to Cleveland and do this movie with me?" I read the script, but I didn't meet with Sophie [Goodhart, the director] or do anything else. I was just like, I think I just want to go do this—mostly to go be with Jenny. The script is really good and I felt like I could stand behind it, but it wasn't like this was a part that I was dying to play. I was really dying to play with those people. I wanted to go be with Nick, Jenny, and Adam. And it was really fun.

What was it like working with Sophie as a first-time director?

Sophie was wonderful. She was hugely pregnant while we were shooting. She was like eight months pregnant by the end of it, which was really inspiring for me. I want to make a movie, and I think a lot about how hard it is to plan to have a baby and stuff like that and then, damn, this woman! I have pictures of her strapped into the gear, hanging off a truck, eight months pregnant with her massive belly, doing her job being such a badass. Super inspiring.

How is it different working on set with other actors that are also writers and creators?

Honestly, I think the only real difference is that everybody knows how hard it is to make something, so everyone’s working really, really hard and there’s very little complaining about "Oh, the trailers are too far away," or "My mic pack is falling off." Everybody's just rolling up their sleeves and has a really can-do spirit.

Did you guys hang out off set?

Jenny and I were actually staying in the same apartment. They had originally wanted to put me up in a hotel and she was like, “You're gonna be really lonely in that hotel and I think that hotel is haunted. Did you just want to come stay in my apartment?" Adam, Nick, she and I and Sophie and her husband and her little boy were all in the same building! We went to the fine arts museum in Cleveland, which was wonderful. Jenny and I took day trips on Sundays and went to thrift stores. It was very mellow. We're all adults, none of us need to go out and get trashed in Cleveland. We went to a Cavs game—that was really fun!

You have a show The Walker on Refinery29. How did you get involved with that?

My friend Rightor, who I’ve been friends with for about 10 years, wrote this web series and figured out a way to raise the money for it. To me and a bunch of our best friends, he was just like, “Do you want to come shoot this thing in my apartment?” So we did in about 10 days in 2009. It was like an art project. It’s great that it's out in the world now, because Rightor is really special! I think his sensibility is really unique.

Do you feel like you have so many more opportunities to be making work and putting them on different digital platforms like Refinery29?

It’s sort of like the same thing as having digital cameras or something, and having the means of production be a lot easier to get your hands on. It’s both a pro and a con. It makes it a lot easier to make a film or what you’re talking about—there are more venues to show your stuff. It also means, for all of us, there’s a proliferation of content and it makes it actually harder for me as a consumer to figure out what I want to watch.

For sure. There’s so much going on.

I sort of put myself on a TV diet last year. I was just watching too much television so I kind of stopped.

What did you sacrifice?

Like when I would be tired and I'd just want to put on HGTV. It's not like there was anything of real substance, but I just kind of stopped trying to...

Keep up with everything?

Yeah! The availability to binge watch is not great for me. I'm kind of an insomniac, so it's much better for me to unplug.

Where are you guys in the development process for Max?

I can't tell you.

When did you meet Lena?

Lena and I had met at a party about six years ago, and we really got along, but we just sort of run into each other. Then, last year she asked me to do this Rachel Antonoff video that she was directing, and then we sort of fell in love.

Did you grow up writing? Have you always been a writer first or an actress first?

I guess I think of myself as an actress first because that’s what has to come first in my scheduling. I have always written. I just went through my attic and I was shocked by how much I wrote as a child. I think that having private writing is also something that's really important. I even find for myself, having Twitter, or having an online outlet, means that I don’t really keep a journal in the same way that I used to. I bet that’s even more true for kids than it is for me. I think having private thoughts is really good.