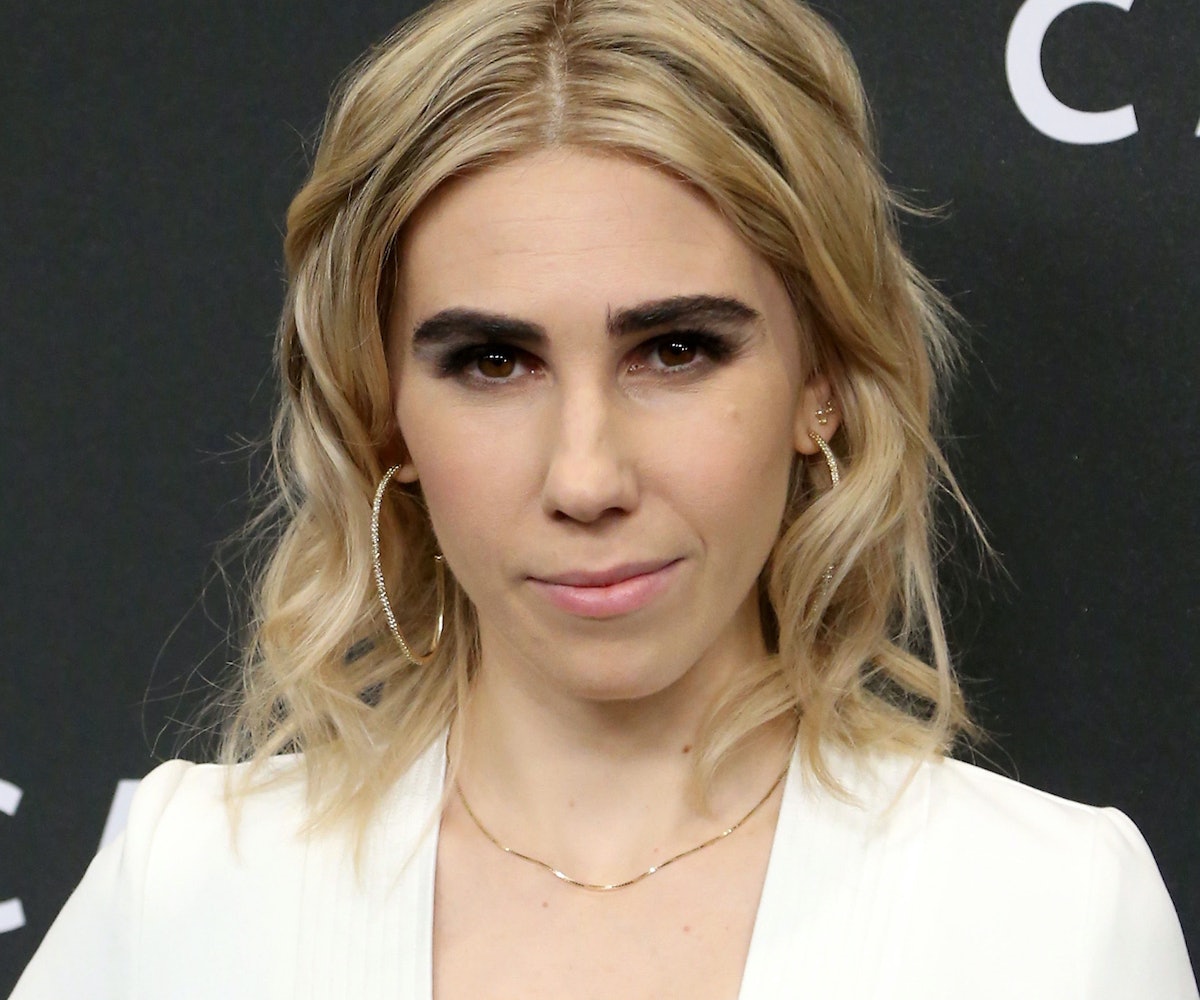 Zosia Mamet is on fire, with a whopping five films scheduled to run by next year. Known collectively as the tightly wound, painfully naive Shoshanna on HBO's Girls, Zosia's expanse of roles has demonstrated the actor's depth. Most recently, Zosia took a decidedly darker turn in Bleeding Heart, where she stars alongside Jessica Biel as her tortured, long-lost half-sister. In the film, Mamet plays a sex worker whose sister gets involved in her not-so-clean-cut life, proving that the road to hell is often paved with good intentions.

So I’m sure everyone opens with the same question, which is this character is so different from the one we see you play on Girls. What was exciting about playing someone who was so not straight laced or free spirited as opposed to your character on Girls?

I think that’s just the same thing in general about being an actor and what I look forward to is always to play someone super different. That’s the reason why I do what I do so…

Physically, you also had a very particular aesthetic with the doorknocker earrings and the long hair, was that interesting? Both Shosh and Shiva are so defined by their looks. How did the costuming help you get into your role?

I mean again, it always helps. I remember when I was younger and starting out, a casting director was like "The shoes you wear to an audition are always important." And I was like, “Really? Why?” And she said, "You know, think about it. As a woman, you’re going to stand differently in a pair of heels you’re essentially a different person.” And so that’s just another layer of playing someone totally different that is super fun. I was wearing booty shorts and push-up bras and I’ve never really done that before for a part and it was super fun to be something different.

That is really interesting, I’ve never thought of the idea of just standing different when you wear combat boots vs. stilettos. And it’s so clear both Shosh and Shiva have such different footwear, and such different walks in life you know. Did you find yourself feeling particularly sympathetic to Shiva?

Sympathetic in what way?

You know, everyone has different circumstances but at the end of the day hurt is hurt and I think that that’s really what she was going through. Just because I am not a prostitute didn’t mean I couldn’t understand it as a human.

That’s a good point. Have you, because jumping into this role, have you increased sympathy or perspective on sex workers and the inherent violence in their industry?

(Director Diane Bell) talked a lot about it because she had experience working with women and teaching them yoga. So we had a lot of talks about it, and the face that they’ve been and it’s very dynamic because there is one who continues to say I don’t need or want to be saved, this is my choice and it’s very delicate in that regard because there some women in the stripper community there are so many women who take awful circumstances as a sense of power I think and there are some who are more immune to it in a terrible, terrible way but it was really interesting to talk to Diane about it who had such candid interactions in an intimate setting, and ways they would let her take ask one and ways that they wouldn’t. I thought that was really fascinating.

As a modern person who has had access to things that a lot of women who do fall into the sex industry don’t have. Being a feminist means that you are accepting of what women want to do with their bodies, no matter what it is. So I appreciate that Shiva wasn’t just a super tragic character that had no control over her own autonomy.

I think often we as women think of it as like go in for the CEO job but like maybe it means having a trailer and being a stripper and making crazy money and being mom of six kids and working at the library as a volunteer or maybe it means you know running a Fortune 500 company but I think often women what were think what being empowered means has become incredibly narrow and we’ve come to judge each other about our choices which to me is not being a feminist at all for us to judge each other why are we even fighting for equality if we’re not going to be a team about it. It all has to do with everybody’s individual choice.

Yes, personally I would agree with that stance as well. Do you think that the only way out for Shiva was violence?

I wouldn’t even say that violence was her way out. I think that violence was a collateral of the circumstance that arose. So no I wouldn’t say was her only way out but I do think there are already strange loopholes when it comes to the law about what people can actually do and how much a restraining order is effective and you know, it’s a very tricky situation 100% and I think that the way the film ends is, it gives the utter and complete catharsis which is like the dragon has been slain. I don’t think violence was the only answer.

I like the metaphor of the dragon has been slain, literally and figuratively. This movie is really concerned and interesting, this movie really emphasizes May’s intention and naivety and her sweet-natured heart. What do you think she does wrong?

I think that she is concerned that I need a knight on a white horse. Sure, her life is not great, I’m sure she would like a better one, but I think that like May coming in like, “I’m here to save you!” It’s sort of like an offensive thing to say to someone who is like ”I’m not looking for that, I’m ok.” I think sometimes it’s hard to speak clearly when you’re blinded by your love for someone and your desire to protect them.

That’s also the idea of a true bleeding heart not quite listening to the person that they are helping. My last question is, of course because the new trailer dropped today, I was wondering if you could just talk about what we’re going to see for Shosh in season 5.

Hmm…What are you going to see for her in season five. I think that she has a little bit of a breaking point. I feel like during that period in life you’re trying every door you can, like “Maybe this door, or maybe this door” and like you know she fucks around two seasons ago, and is like “Oh, that wasn’t it!” and then really tried to get a job and is like “that wasn’t it!” and this season is the one where she’s actually asking herself what she wants, and trying to set towards that.

She’s trying to actualize herself.

Have you been watching

No I haven’t been.

Oh my God, the last episode there’s this character whose just like “I’m actualized! I’m actualized!” You have to watch it—it’s so good.

is currently in theaters.