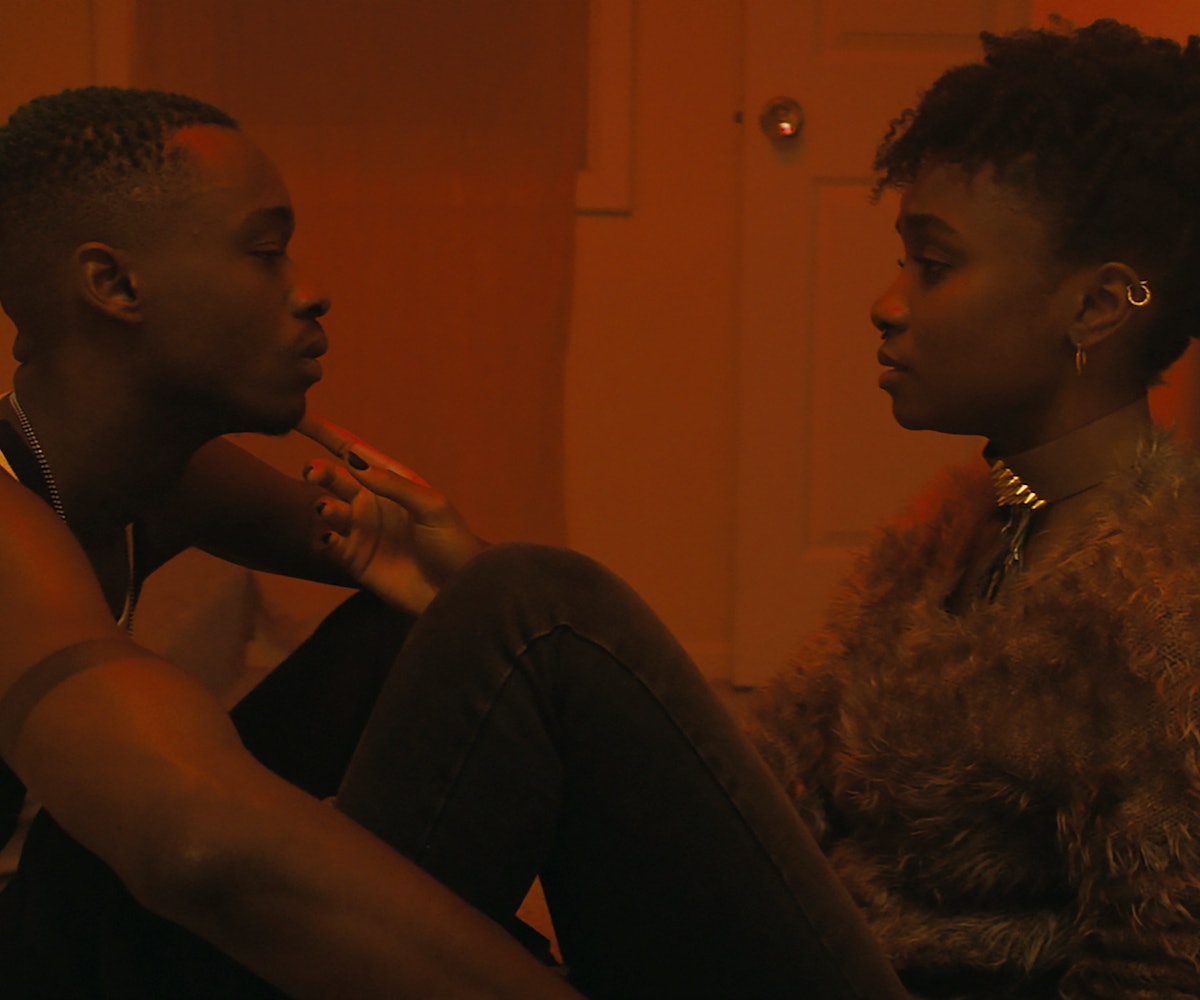 photo by Matthew Libatique for HBO

This interview contains some light spoilers for this film, though all are plot points from the novel, published almost 80 years ago, upon which it is based.

In Rashid Johnson's film adaptation of Native Son, Richard Wright's groundbreaking novel, much has changed. The setting is still Chicago, but we're now in 2019, not the 1930s, right in the middle of the Great Migration. And while the main character, Bigger Thomas, still lives with his mother and younger siblings, now, his mother is a paralegal, studying to be a lawyer, and Bigger is a green-haired bike messenger, still figuring out who he wants to be, but with more hope for his future than he'd have if it were still 80 years prior. And, in the novel, Bigger's girlfriend, Bessie, was a two-dimensional enigma; in the film, she's a fully realized woman, with her own wants and needs, that include loving Bigger, until it becomes close to impossible.

Despite these changes, Johnson's Native Son is not so different from Wright's: They are both stunning examples of the ways in which Black Americans are oppressed within our white supremacist society. They both powerfully demonstrate how Black lives can be permeated with anxiety because of their awareness that they don't get to make any mistakes; one wrong move—even just the perception of a wrong move—can mean their doom.

At the center of Johnson's film is Bigger, played with sensitivity and strength by Ashton Sanders. Though the film, like the novel, revolves primarily around Bigger, Bessie is given a larger role in the film, her importance is made clear, and she is played luminously by KiKi Layne.

Recently, I had the chance to talk with Sanders and Layne about their experience making this film, what felt important about telling this story now, and how the screenplay's changes made for a more powerful journey into the lives of Black Americans.

What was your first experience with Native Son as a text: Was it the film's screenplay or the book?

KiKi Layne: For me, it was high school. That was the first time that I read it, and I definitely didn't understand it as well as I do now.

Whether the book or the screenplay, it's such a uniquely challenging narrative; it's so rich, it's so full of questions for you as the reader or the viewer to answer. How was it, then, approaching playing these complicated characters, Bigger and Bessie?

AS: I would say my first read was definitely full of anxiety. I feel like this film is constant; you're always on the edge of your seat, just waiting for the next thing to happen, because you feel like something is going to happen—you just feel like it's leading up to something. I think that was my first emotional experience with reading the script. But, at the same time, it's interesting because after playing Bigger, you know, Bigger actually walks around with the same type of anxieties that we feel as the audience, right? So that's interesting, how the way you feel is an extension of the character, and how Wright wanted people to feel in the first place.

KL: My first experience reading the screenplay, I was just excited seeing the changes—especially with what they did with Bessie's fate; it's very different from the book. Overall, I feel like the screenplay gives the characters more humanity, like you get to see human struggles that they are dealing with in a way that I feel like is more full in the film, than in the book. I was really excited about that and excited about how, even with this adaptation, you still recognize how much really hasn't changed from what the core themes of the novel are. Especially that fear and that anxiety that are both still very much present. And so, I thought that was something that was really powerful.

A key aspect of both watching the film and reading the book is that there comes a point when you realize things are not going to turn out well for Bigger, and you want to think how he could have, like, escaped his fate. Like there's some way things could have turned out differently. But you start to understand that there is no escape from the kind of oppression he faces or that Bessie faces. How was it portraying these characters who are in such complicated situations but trying to do their best?

AS: The goal I set for myself was to fully understand Bigger; and, Bigger being an extension of me, obviously, I can understand him in certain ways. I'm a Black man living in America in 2019. But I was also honoring Richard Wright, and what he wanted to do. I hadn't read the book, but I was aware of the themes and who Bigger Thomas was, and so on and so forth. So, I guess it was just staying as authentic to the character as possible, as close to what I'm representing as possible.

I think the trust that Rashid gave me and gave the cast really allowed us to explore these characters in ways that you really aren't allowed as actors, on-set. And that was really special. And honestly, this project demanded that specificity. It demanded that we tuned in so hard in that way, because these stories, these characters are iconic—they represent a lot of people. And these stories can be a reflection of our society for a long time.

KL: I think, for me, the challenge was really investigating that fear and anxiety, and where it lives in my personal life, and being willing to look at that more. Because I think sometimes, it's just this thing [you feel]; you're not paying it as much attention, you don't really question, Why do I feel uncomfortable? Why am I unsure? Like, is this hairstyle too "ghetto" for this?

KL: Doing this project forced me to really look at where that's coming from, and how it's actually affecting me. Because I think that's one of the big things that we deal with in this project, this constant fear and anxiety that Black people just carry with us on a day-to-day basis. So having to look at that more was an interesting aspect of preparing to do this project.

That's something that I felt the film did so well, those little moments, where you realize that any intuition you might have that someone's not treating you right, you can't ignore that, because it's real.

What kind of conversations do you hope this film will spark in viewers?

KL: Definitely conversations about why it hasn't really changed. Why is [Native Son] still so relevant, even if we didn't set it in modern-day, it would still be relevant, and why is that? And what can be done about that? And also, I think just being more attentive to who, especially in the Black community, do you really want to be, and how do you really want to express yourself? And then, what you actually end up doing in response to what society is telling you is the best way for you to behave.

The moments of intimacy and affection between Bigger and Bessie were so beautiful and so moving, and made it so much more painful to see Bigger's life start to unravel. But, were those moments nice respites within the filming? Like, was it nice to just be able to be on the beach, sitting together, painting Ashton's nails?

AS: KiKi and I have known each other for years. We both went to the same acting program in college. I was blessed to have KiKi as my counterpart because I already felt really comfortable with her. She's dope, she's chill, and a good actor.

KL: Yeah, I mean just coming into the project, we're already homies, so it's easy to lean into that. And when it came time to do those darker moments, you know, lean into our acting abilities and the work that we had done building these individual characters, I feel like the relationship came naturally. And so then, in those moments where we had to lean into our own separate work, it was still fueled by what we had built together. I definitely think it made a difference.

KiKi, Bessie has a different fate in the film than in the book, so does Bigger, but I found the change to Bessie's fate to be profoundly moving, and it was one I felt grateful for. What did her different ending mean to you?

KL: I feel like [the screenplay] leaned into, again, making these characters more human and, in particular, making Big more human. I think in the book, when [he kills Bessie], especially because he rapes her as well, it just takes you to a place where it's like, I can't feel for this man. But I think with the way that Bessie's story ends in the film, I think you can still feel for Big and feel for their relationship, because you can feel more of the love and more of what the outside circumstances have done to this relationship, which is something that I think we don't always reflect on. That was one of the things when talking to people about Beale Street—like, all of these things that we're hearing, all of these statistics, and this victim and that victim—these are people who are in relationship to other people. So when these types of things happen, it's not just on that one person that you see in the news or the hashtag, unfortunately. These people have families, loved ones—mothers, fathers, brothers, sisters, children. I feel like this screenplay allows you to examine more of that, like, Oh my goodness, look what happened to their love.