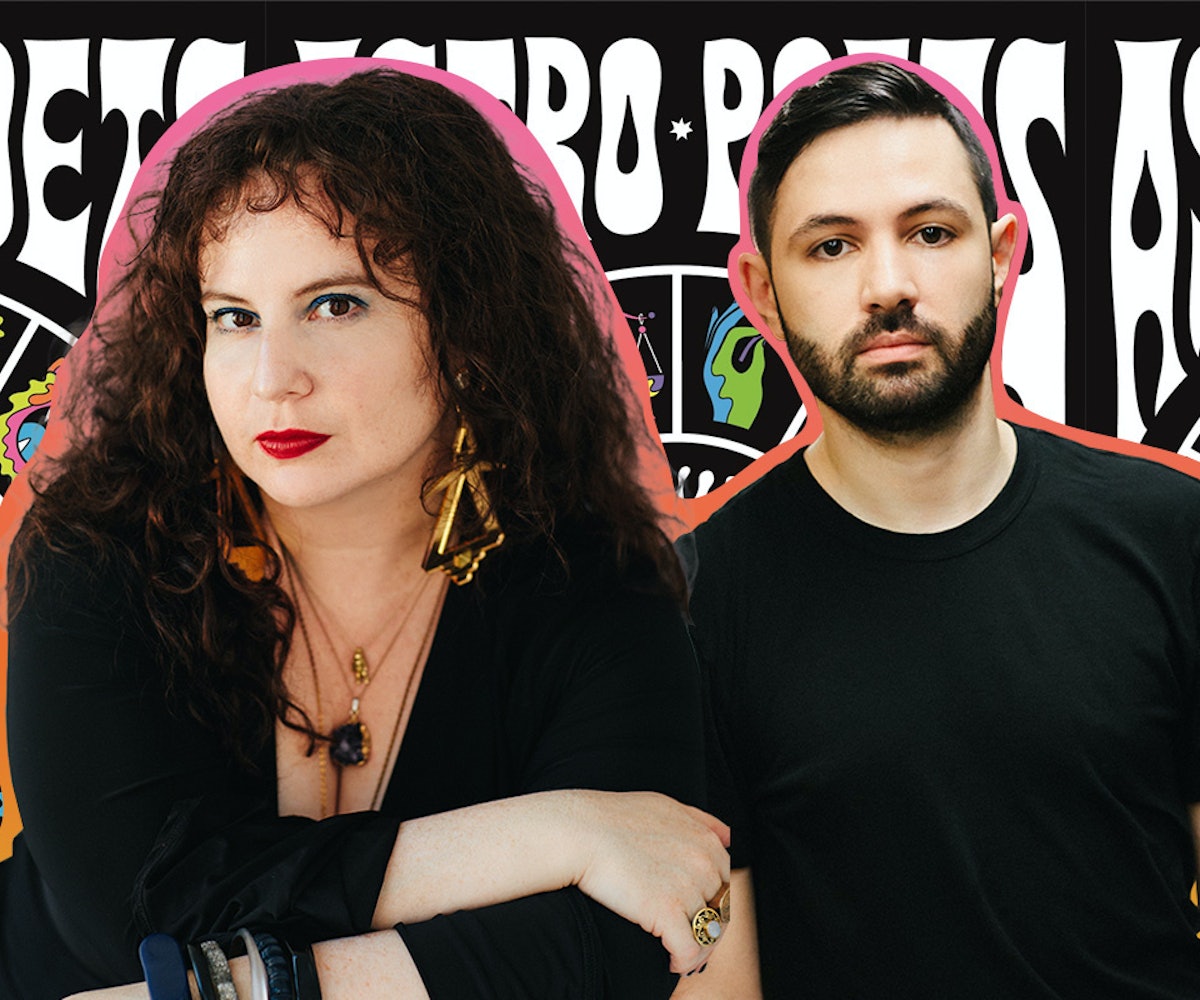 On January 1, 2017, Mariah Carey had a trainwreck of a start to her new year. Performing as the New Year's Eve Ball dropped, she badly lip-synched, audience-interacted, and pranced her way through five excruciating minutes due to technical issues.

"It was such an Aries moment," laughs Dorothea Lasky over Skype. "Everything she was doing could be explained by her being an Aries." Mariah Carey's now-infamous performance features in Astro Poets: Your Guides to the Zodiac, the new book written by Lasky and Alex Dimitrov, the duo behind the viral Twitter account of the same name. Combining astrology and poetry, Astro Poets is divided into 12 sections, one for each zodiac sign, examining pop culture moments that embody each sign's personality (Carey, obviously, standing in for a "quintessential Aries" who will "always perform their way through adversity"), as well as giving horoscopic guidance to everyday life. As funny as it is generous, the book's voice will be familiar to anyone who follows the internet's favorite astrologers.

Below is my conversation with Lasky and Dimitrov about Astro Poets, how astrology and poetry are like sauce, and why zodiac signs can give structure to queer lives.

How did Astro Poets come into existence?

Alex Dimitrov: The Twitter came about in a weird, random way. [Dorothea and I] had started a really niche Twitter about being fire signs literally the first night we met at a party 10 years ago. Nothing really happened with it. Then in November of 2016, I was bored and restless and unhappy with my life. I think the only way to get out of misery is to make something else. I texted Dottie asking if we should make the Twitter because we'd had the idea for an astrology Twitter for a while, and she said sure why not. So it kind of started on a whim.

How did you start getting into astrology?

Dorothea Lasky: I was born in the late '70s so astrology was prevalent in pop culture growing up. I remember when Ronald Reagan was president — not that we want to think about that — and his wife, Nancy Reagan, was really into astrology.

Alex: She was into astrology?!

Dorothea: Yeah, she was so into it that she wouldn't do things if her astrologer said not to do them.

So, astrology was definitely around when I was growing up, but I didn't get deeply into it until my early 20s when I was in an MFA program for poetry. I had a friend who was into it, and I had a big crush on a Gemini and wanted to figure out how I could get this Gemini to like me, so my friend helped me utilize the lessons of astrology to attract them. At that point, I saw how powerful astrology could be.

What about you, Alex?

Alex: I got really into witchcraft and astrology when I started reading Anne Sexton and Sylvia Plath at the end of high school. Also, at the end of high school, Britney Spears happened, and that was a huge awakening for me, not only as a gay person but also I really wanted to identify with someone in the culture who was Saggitarius. So it was this big storm of my pop culture interests and my poetry interests.

I was raised Catholic, but I really didn't like the rules and didn't like the idea of one God. So, astrology offered a system that wasn't a system at all; it just held together all of your questions and anxieties but was very much in the service of the pursuit of other earthly knowledge.

Do you feel the same way about poetry and astrology fitting together, Dorothea?

Dorothea: Oh definitely. I think one of the benefits of astrology or whatever way you make your own spiritual practices, is that you determine what those choices are. It might be inspired by lots of different traditions, but you're not told what symbol you have to worship or what you have to put on your altar. You get to make those choices yourself, and I think those choices are both in the spirit of poetry and astrology. It's about the potential of magic and not what someone tells you magic is, like making your own sauce instead of following a recipe to the letter. I think we both want to make our own sauce.

I love the image of astrology being a sauce.

Dorothea: There's a poem by Bernadette Mayer, who's a Taurus and one of our favorite poets, and she says, "You burned the Sunday sauce." I love the transformative power of cooking, or it's like a witch's cauldron or a chemist. This idea of putting elements together, and they transform into something that couldn't be if they were separate entities. I think that's what poetry and astrology is for us.

Do you see a correlation between the popularity of astrology with millennials and the world we're living in now? Do you think young people are turning to astrology because of the uncertainty around them, in politics and the climate crisis?

Alex: I think it's interesting to think about, but no matter what climate Lady Gaga puts out an album in, people still want to be entertained and people want to think about another world. We've always had problems although, obviously, we're at a very terrifying point now. I'm teaching a class this semester on the '60s and '70s, and when my students look at footage from then and see all the shootings and the fact that we nearly went to nuclear war, they're like, "Wow this is almost as bad as today." I think it's easy to write away peoples' anxieties and say people are into something because they're anxious about something else, but the human consciousness has always had the need to imagine something greater.

Dorothea: I totally agree with Alex and hear what you're saying about the '60s and '70s and even earlier; there's been brewing this idea of distrust in structures that's always been at play in history.

But, at the same time, I think there are particular factors that are affecting everyone now, and millennials are so distrustful — and rightly so — of organized religion or political systems, and astrology does provide a great outlet for that. But I think what Alex is saying is true, that art has always been that thing there to empower you, and hopefully, no matter what happens in this moment, poetry is something that is going to endure even if people stop making memes.

I feel like there's a strong correlation between astrology and queerness. Do you think the two relate in a significant way?

Alex: Part of being queer is growing up and seeing a way that people have decided to live which is performing masculinity, performing femininity, being in certain relationships, and behaving in certain ways. Knowing that you don't actually conform to those, you have to build your own set of ways to conduct yourself while also performing what everyone else is doing. You're living two lives and in two worlds. So, what queer people are very good at realizing is that many things can be happening at the same time and that you still have to find a way to the truth through a lot of bullshit. There's no blueprint for being queer. I think that astrology is perhaps interesting to queer people because it's an alternative mode of understanding the world while at the same time making room for personal choices.

Dorothea: I think what draws people to astrology is the idea of finding out about the self and that as a self you're not a fixed thing. I think when people are figuring themselves out, astrology is a natural fit because it gives them a lens for looking at themselves. It allows you to see elements of yourself that you might not have acknowledged before, kind of like looking through a colored lens.

Astro Poets: Your Guides to the Zodiac is available for purchase here.

NEXT UP
Culture
11 Must-Read February 2023 Books
Culture
Puma Releases Art Book Who’s Who: New York Local Edition
Astrology
How to Use Astrology to Access Past Lives
Astrology
Your February 2023 Horoscope Is A Breath Of Fresh Air
Style + Culture, delivered straight to your inbox.