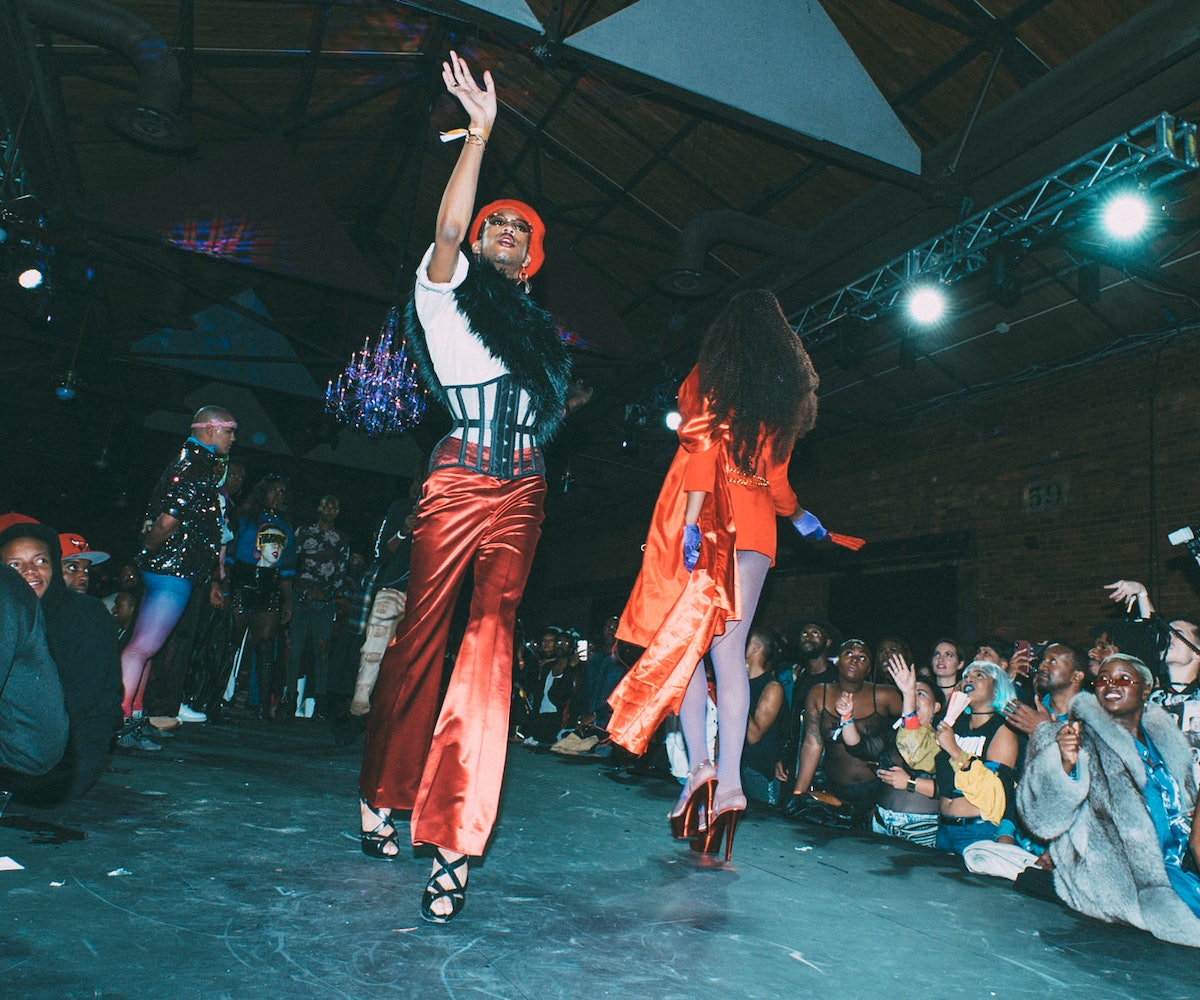 Identity repression is a fickle thing. I've always been gay, but it took until I moved to New York City—and away from the conservative culture in my hometown of Birmingham, Alabama—for me to accept that fact about myself. It had always been true, but I'd been unwilling and even afraid to believe it when I lived in the South; maybe because I am innately scared of judgment, regardless of the come-what-may attitude I like to think I have.

And, even now, there are ways in which I'm still afraid to talk about being gay when I go back home, so fearful am I of being judged, and of not being accepted.

Which is why I felt equal parts enthralled and nervous to attend Atlanta Is Burning over the weekend, an event hosted in Atlanta by Red Bull, which celebrated the ballroom scene in what is arguably the South's best city (sorry to my hometown). If you've seen Paris Is Burning, you'll know that New York City has long had a thriving ballroom scene, a subculture that has been historically inclusive and celebratory of gender nonconformity. But what you may not know is that a similar scene has existed in the South—specifically in Atlanta—for almost three decades. Leonce Nelson, the music producer and DJ who helped plan the event, noted that the scene in Atlanta is "definitely one of the strongest, if not the strongest ballroom scene in the South."

I'd assumed, naively, that since I had not found or even known about a queer subculture in my hometown, that it just did not exist in the South—at least not to the degree I knew it did elsewhere. But, though I was wrong, what is true is that these subcultures are not as celebrated or as well documented as the ones in other places. Brooklyn-based rapper Cakes da Killa echoed this, saying, "When you go outside of L.A. and New York, there's not a lot of queer visibility—not a lot of gay or trans visibility." This doesn't mean that performers or queer individuals in the South hide their identities or their sexualities, though. What I found so interesting about the ballroom scene in Atlanta is that it's so out-there, so in-your-face—so gay—that it gives the concept of pride a whole new meaning.

The idea of being so outwardly gay in a place where you might get assaulted (verbally or physically) speaks to another level of bravery to me, but it's actually commonplace for many who participate in the scene. Surprisingly, to me, "the South is a lot gayer than people think it is," according to Nelson. Also, as Atlanta-based singer and DJ Divoli S'Vere says, Atlanta differs from the rest of the South—especially the more rural areas—because "there's always something going on in Atlanta," particularly when it comes to ballroom. But still, Nelson says, "Even though the ballroom scene has been so active in the South, it's also very underground still." Think of it as a self-preserving force within the community.

Vjuan Allure, a DJ, producer, and founder of the House of Allure, got his start in New York's ballroom scene, and said that while in the North, ballroom performers "were more out with their femininity and they were walking around in heels," in the South, the culture is "not more reserved, but just a different scene," which could definitely be a repercussion of the still-prominent prejudices that many Southerners possess. Atlanta Is Burning, he said, is meant to "[highlight] that there is that scene, and you can find things to do if you're into the underground culture." And it's clear that there's a demand for it: I was shocked and relieved to see hundreds of queer people—queer, Southern people (my people!)—show up for the event.

Thankfully for everyone, the performers that participate in ballroom and voguing contests in Atlanta don't share my aversion to being out in the South, even in a place where many people may not accept you. S'Vere, who hails from New York, notes that "being queer is still not accepted in the South," and that "it's still very, very, very prejudiced down here." Also, "people are extremely nosy, and they want to know all about everything with you." But still, he said, he "never really gave a shit" about what people thought about him, or whether people approved of his identity, so it didn't matter to him.

Something similar was noted by singer Ripparachie, who performed his set in a bomber jacket decked out with silk flowers. A native of Indiana, he moved to Atlanta because he thought it would be less homophobic than his rural town, but instead found that he was receiving the same type of treatment. He wears pink every day as a marker of his identity, and he said he was threatened and assaulted just for wearing the color. "People would pull knives on me in the street," he tells me, but he did not back down from the threats.

A celebration of the ballroom subculture in Atlanta has not happened on such a large scale, according to the artists involved. And such a celebrated ball, they said, would do wonders for queer representation in the South. S'Vere says that it would "make people realize that there are spaces that allow you to be comfortable, and allow you to be yourself, just putting out there that there are other people in Atlanta, or in the South, who are comfortable being themselves." This is certainly something that I never saw growing up in the South, and my trepidation is something S'Vere notes is still a common experience for people: "I have actually come across one or two people who don't know where to go to have a good time and still be gay, or whatever the case may be, and still dress a certain way and just be comfortable being themselves, out."

But there is a notable difference to my experience growing up—not least because a subculture like ballroom now has corporate sponsorship in the form of Red Bull. Though that might be dissonant for some, at Atlanta Is Burning, many of the performers were comfortable with a large company being involved, and saw it less as appropriation, and more as something that would help to provide more representation for the Southern queer scene and bring legitimacy to a subculture that has been underground and underrepresented for years. S'vere puts it best: "They're just shedding light."

And, of course, there are always complications when marginalized groups are co-opted by those that aren't as marginalized; this was the case with the film Paris Is Burning, which was directed by a white lesbian who was not involved in the subculture, and who exploited the key players in Harlem's ballroom scene to make her film. I can't say that there is any redeeming quality in those actions, but I can say that I—and countless others—wouldn't know about the subculture without that movie. It's a shame that representation came at such a cost, but it also provided an important lesson for those promoting Atlanta Is Burning, who worked with the already established ballroom culture to make an event that appropriately represented them. It didn't claim to start the ballroom scene in Atlanta, but it definitely brought awareness to the Southern queer community in a powerful way. Nelson says that the visibility that came from this event "does a lot for queer representation in the South," and might even help queer people who didn't know about events like this, who have "never known how to access the ballroom scene," gain that coveted, often elusive access.

Knowing that there are hundreds of other people like you in your city may not change a queer person's experience with the prejudices that lots of Southerners still have, but it could make facing that prejudice feel more bearable by knowing that there are other people who are still living their best lives in the face of that discrimination. And maybe soon, people won't feel like they have to move to another city to find their community, like I thought I did. S'Vere says that this event was important to him because "Atlanta needs something like this," and I agree. All of the South needs something like this—all of America does, really.