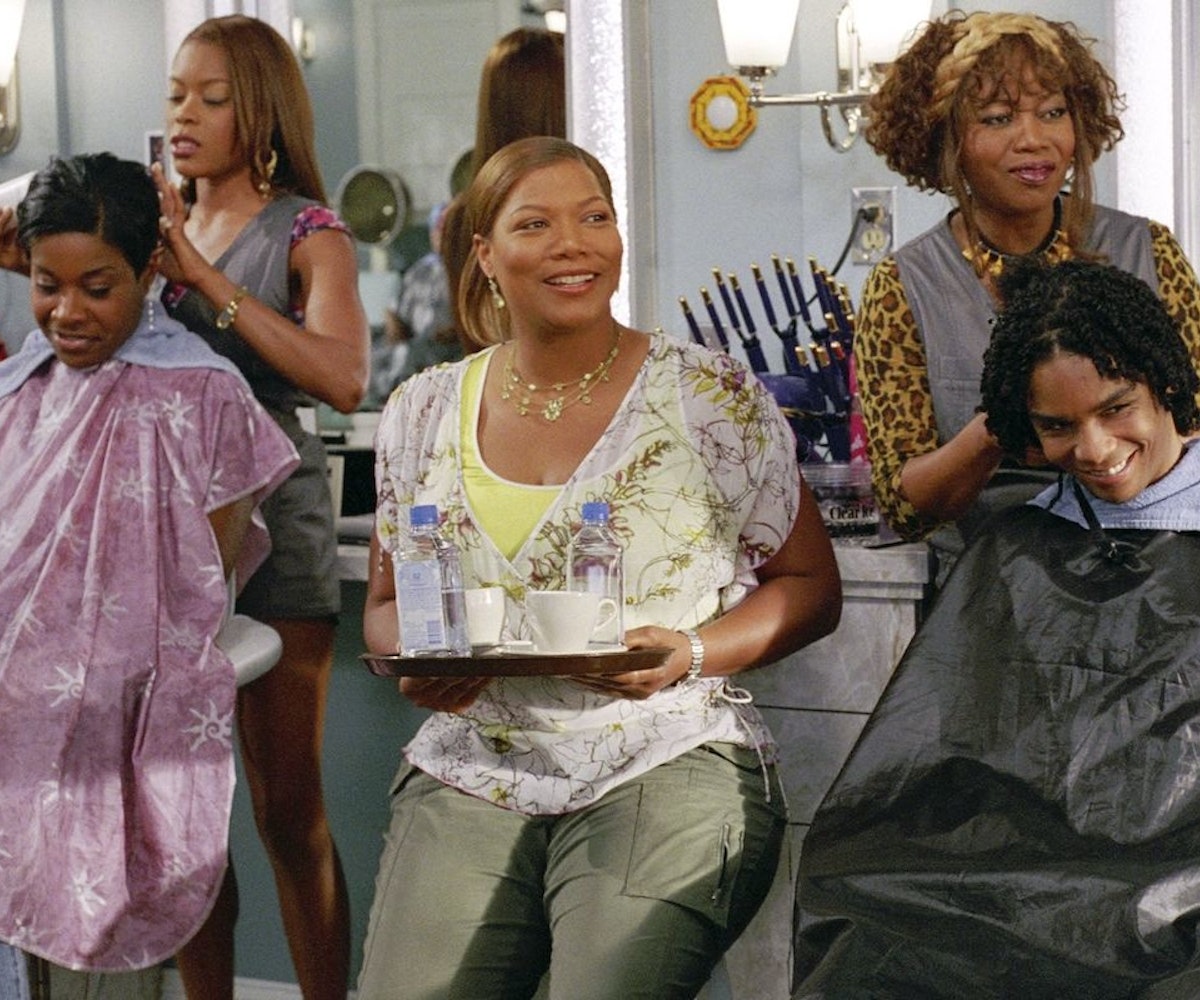 Fifteen years ago, on March 30, 2005, Beauty Shop was released in theaters. Slated as a spinoff of the Barbershop franchise, it stars Queen Latifah as Gina, a hairdresser who moves to Atlanta, Georgia to start her own shop.

The film opened to some rave reviews, as well as a few critiques. It has been called an "unfulfilled attempt at brand extension," but it actually contributed a lot to film. It gave us the following: a depiction of Black love (with Queen Latifah starring opposite Djimon Hounsou), Black female entrepreneurship, Black sisterhood, and beauty shop culture.

In an interview with Film Monthly back in 2005, Queen Latifah, who also served as one of the film's producers, spoke about the intention behind the movie. "We kind of just wanted to create something new," she said. "Gina was introduced in 'Barbershop 2,' but she wasn't really established. We didn't really know who she was. So now it's like who is she? Who are we creating here and what's the story, what story are we going to tell?"

The intention was successful. Gina is a well-rounded and fleshed out character. We see her as a single mother at home with her family which includes her daughter, played by Paige Hurd, and her niece Darnelle, played by Keshia Knight Pulliam. We also see her financial struggles as she deals with the IRS and even getting a loan for her shop. The film leans into all of the moments that allow her to be fully human, flawed, and nuanced, something that films with Black female leads don't always accomplish. The film also doesn't turn Gina into a caricature. Along that topic, Queen Latifah said, "I like to see situations where we don't go with what the typical thought process would be. We actually do what a person might do in real life. We don't all sell drugs. There are different kinds of Black people and it's important that you see that."

The representation of beauty shop culture is also where the film shines. Some key motifs of the beauty shop that are present include: stylists reading tarot cards, the woman who sells food like greens, fish dinners, and monkey bread in the shop, the man who sells purses on the street outside, and the little kid who sells candy bars.

The beauty shop also serves as a refuge for women to talk about their problems. Finally in a space without the presence of their children or spouses, they feel free to be vulnerable and honest. Self-care of both the mind and body is possible. The women in the beauty shop listen to a local radio show that sparks conversations from everything from cheating husbands to bikini waxes. The community that the beauty shop fosters is one of the most important elements of the movie. Your hairdresser can serve as your therapist and friend at the same time.

This vulnerability and safe space is an integral part in the lives of many Black women.

When asked about the community of the beauty shop, Queen Latifah said: "What other situation do you put yourself in when you allow someone to touch you for about two hours every week? When you are in that kind of situation, it sort of disarms you. It opens you up and you get to know this person and you start sharing things that are on your mind or things you are going through and the person does become your therapist in a way." This vulnerability and safe space is an integral part in the lives of many Black women. These spaces are important and deserve their representation.

Beauty Shop is an ode to the Black experience. The poetry of Maya Angelou is permeated throughout. Miss Josephine, played by Alfre Woodard, recites "Phenomenal Women" and she's joined by all the Black women in the shop when she starts quoting "Still I Rise." There is something very powerful about witnessing a group of Black women say, in unison, "Bringing the gifts that my ancestors gave / I am the dream and the hope of the slave / I rise / I rise / I rise." These moments make the film really special.

In addition to representation, Beauty Shop also depicts Black love. When she gets her new shop, Gina meets Joe, played by Djimon Hounsou. Joe is a handyman who also happens to live above the shop and plays piano. Their love is sweet and uncomplicated, a refreshing take on Black relationships. After this film was released, Queen Latifah made great contributions to romantic comedies such as Last Holiday (2006) with LL Cool J and Just Wright (2010) with Common.

So, what happened to mainstream Black female ensemble film casts? Queen Latifah was in one of the most recent ones — the riotous blockbuster Girls Trip, starring alongside Jada Pinkett Smith, Tiffany Haddish, and Regina Hall, but other than that, as fun as they are, these films are relatively few and far between.

Just a year before Beauty Shop was released, in 2004, Nora's Hair Salon, starring Jenifer Lewis, Tamala Jones, Tatyana Ali, and Lil' Kim and Hair Show, starring Mo'Nique, Gina Torres, and Vivica A. Fox were both released. Though they were low-budget indie films, they still existed, which is something that can't really be said about Black female led films today. The film industry has made great strides in terms of Black representation, but still has a ways to go when it comes to Black women.

Overall, Beauty Shop deserved better. While the original Barbershop franchise included three films, Beauty Shop only got one. There are so many possibilities for further expansion — and maybe they'll eventually make a sequel. But nonetheless, after fifteen years, Beauty Shop is still a lasting symbol of Black womanhood and Black culture.