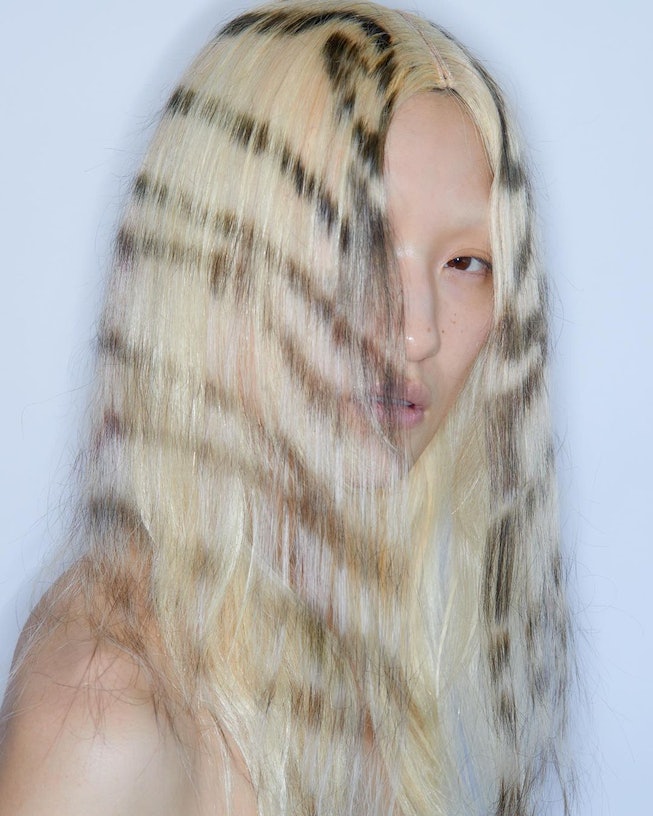 By now we thought this year had brought back chunky highlights in every way imaginable. We’ve seen everything from Cristina Aguilera’s early 2000's black streaks to face-framing two-toned bangs. But thanks largely to TikTok, emo and scene culture is making a comeback and so too are horizontal highlights (aka raccoon tail hair), although, thankfully, the look is a bit different this time around in 2021.

If you were on Tumblr during the golden days of scene culture (the early 2000s), you would have come across the glorious world of clip-in two-toned hair extensions. Usually black (because, of course, emo) and another lighter color, these gave a horizontal effect and were usually clipped in the under layers of the hair or in a sweeping fringe. With this current decade kicking off with hype for the “rawring ’20s” and a call to bring back MySpace culture (there was even a petition), nostalgic trends from early 2000s emo and scene culture are bound to come again. After Instagram’s outage on October 4, the return of MySpace seems more likely than ever. So start ranking your top eight friends and fire up your hair straightener. But lucky for us, it seems horizontal highlights have taken on a far more subtle rebirth.

Two-toned hair has been circulating in a variety of ways for the last couple of years, it’s even been approved by the likes of Dua Lipa on her Future Nostalgia album cover. Now’s is coming back in the form of dip-dye for fall. On the fringes of the trend, some people are getting more creative, opting for chunkier highlights. Most often, people compare the trend to the end of a raccoon tail, while wig artist Tomihiro Kono compared it to Polish Viennetta ice cream.

The revival has already had the designer stamp of approval as Collina Strada’s SS22 runway show at New York Fashion Week featured a clip-in variation, as well as larger highlights. Off the runway, colorful party clip-ins are the perfect temporary fix. Larger blonde (or lighter brown) horizontal highlights are a more subtle everyday look for those who are excited to try the trend IRL.

Raccoon tail hair comes with the added bonus of not having to deal with regrowth, as the highlights or lowlights grow out as your hair does. You can also opt for whatever placements you want without worrying about sticking to the usual hair rules—because this trend clearly bends to none. Who’s to say highlights can’t also be diagonal? At this point, anything goes.

NEXT UP
Beauty
Bella Hadid’s Clip-less Updo Is Going Viral On TikTok
Beauty
Megan Fox Is Completely Transformed By A New Blonde Bob
Beauty
Kylie Jenner Is Bringing 1920 Finger Waves to the 2020s
Beauty
No One Does #PamCore Beauty Better Than Pamela Anderson, Herself
Style + Culture, delivered straight to your inbox.