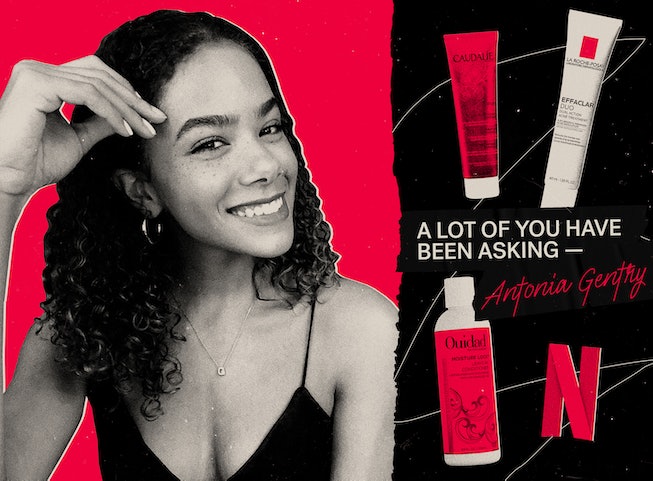 Antonia Gentry knew she wanted to take on the role of Ginny Miller in Netflix’s coming of age comedy-drama, Ginny & Georgia, upon her first reading of the script. Not just because it was a leading role in one of the platform’s new original series, but because she felt it mirrored her life off-screen, too, having grown up with a young mother.

“The fact that she's a biracial lead also really drew me to the project because now it's changing a lot more and I'm really grateful for that, but growing up I didn't really have too [much] biracial representation,” Gentry shared with NYLON over the phone. “I never really saw my household reflected on screen. And so, for that to be changing now, and for this to fall in my lap, I felt like I owed it to the character to go for it, and I'm glad I did.”

The 23-year-old actress, born and raised in Georgia, grew up navigating her biracial identity on her own in a predominately white school system — an experience Netflix let her explore in the Ginny & Georgia script, dealing with similar themes. In a powerful scene, Gentry’s character recites a piece in front of her class touching on the biracial experience from her point of view.

“That monologue ... I felt so lucky to be able to collaborate on that with the writer [and show creator, Sarah Lambert], because she said, ‘This is your experience, you need to be the one to shape it.’ So, that was a really personal scene and I can't believe that people are going to watch it and it's going to be on Netflix. To have your voice heard is so rare, and I feel so lucky. I hope a lot of people like me can see it and relate to it, too.”

NYLON caught up with Gentry to discuss coming into her own, navigating beauty, and the conversations she hopes Ginny & Georgia inspires viewers to have.

What was your relationship to beauty growing up?

I was a huge tomboy growing up. I was constantly outside, running around and not really too concerned with the idea of beauty, or what that would mean. And when I got to middle school, I know all the girls were starting to get into makeup and things like that. My mom actually didn't let me wear makeup until I turned 16, and by that point, I had no interest in it because I hadn't worn it for so long.

I don't know what movie I was watching, but I was watching a movie once and there was a character in it who was this boho woman, kind of like a nomadic free spirit. And she said, “I don't wear makeup because this is just my face, and if people have a problem with that, then that's their fault, not mine. This is my face.” Something like that. I did a really poor job paraphrasing, but it stuck with me in that I wanted to be comfortable with my face and comfortable with my body — that's easy to say obviously, but harder to do.

What were some of the hard parts for you?

I will say, growing up was a little bit hard. I had curly hair and all my friends had straight hair and I had boys tell me, “You look better when you straighten your hair and you should wear it like this more.” And so, there was always this kind of back and forth between what I should do that was acceptable to other people versus like what I wanted to do for myself.

Similar to your character, you faced some microaggressions growing up being of mixed race. How did you navigate that?

To be honest, it was hard. Growing up, my mom always said, “You're beautiful. Love yourself. It doesn't matter what everyone thinks of you.” And you kind of think, ‘Oh, well, she's my mom. She's supposed to say these things.’ As much as I believed those things, or as much as I wanted to believe those things, it wasn't like that all the time. So, it definitely was difficult. When you have crushes who are only into the blondes with straight hair and blue eyes, but here you are with your big frizzy hair and you're weird, you're short, and have freckles … that was me growing up. I do distinctly remember when I was going through puberty not being comfortable with my body changing. I actually ordered breast binders secretly off the internet and I would wear them because I just didn't like the feeling of the male gaze, really. I wasn't comfortable with it.

For a long time I wore boys' clothes and wore ties and button downs, things like that, anything that would kind of make me, I guess, less noticed by my white male peers, just so that I could kind of protect myself from all of that.

Was relocating for college the impetus for you finding confidence and comfort with yourself?

For sure. I went to middle and high school at the same place and it was a really small school, I think there were only 81 people in my graduating class. I was with them for seven years from when I was 10 to 17, so you're around the same people over and over again all the time. It's kind of hard to get out from underneath all the labels that they place on you, all the pressures and things like that. And so, even though I didn't leave the state or anything like that, just being in a city that's way more diverse and meeting people from all parts of the world, let alone parts of the country, was really eye opening for me. I really, really do feel super privileged and grateful to have been able to experience that in my college years and grow in that way, for sure.

I keep it pretty simple because I'm pretty lazy [and] I try different products. I've really been loving Caudalie's Vinosource. I used to not really care at all about moisturizing or putting on sunscreen and I've recently started to be more diligent about that because every time I step out in the sun, especially in the South, I get a new freckle. So, I've been using my SPF a lot more.

I'm lucky in that I didn't have a lot of problems with acne growing up, but I still occasionally get pimples and things like that, and my Holy Grail product is this La Roche-Posay Effaclar spot treatment cream. It saved my life when I went to Toronto and started filming for Ginny & Georgia, because I had to stop taking my birth control. And birth control messes with you so much, with your hormones, and when I stopped taking it, I suddenly started getting this hormonal acne that I had never had before. And I was even more stressed because you're on camera, you're constantly being looked at, you know?

For hair, I use Creme of Nature shampoo and conditioner, and then I'll use the Ouidad leave-in. I just kind of let my hair do what it wants. I only recently got good at diffusing. So, everything is kind of just waking up and looking in the mirror and hoping for the best.

Let’s talk about Ginny & Georgia! What made it feel like the right project for you?

I just really loved the writing. I read the pilot and it immediately drew me in. My mom had me when she was my age, so I got the sex talk when I was seven. I was like, ‘What kind of relationship is this?’ back then, you know? [Ginny and Georgia] are so close in age and they're such different women, they're polar opposites, but at the same time they're completely the same. So, for Ginny I really loved that she had this kind of complexity to her, she's really vulnerable, she's trying to figure out who she is, she suddenly gets all these friends. She's trying to find her identity and I really related to that.

How has it felt to sit on this project over the last year and finally be able to release it out into the world? There are some really personal, powerful scenes, including your classroom monologue.

I think that this show, and having to keep it a secret for so long, I'm finally ready for everyone to watch it, but I'm also nervous. Especially now, everyone has a critical eye, and for good reason. I think what I like about the show is that all of the characters are flawed and they call each other out on their flaws. And so in that regard, there's so much going on politically and socially in the world that is really, really heartbreaking, but people are opening up and they're having those difficult conversations.

The show [also] has serious things in it in terms of like race and there's self harm, there's a lot of situations that may be triggering to some people. We got Mental Health America's approval in the portrayal of certain things and that really made me happy to know that we responsibly are showcasing very real issues. I hope that it just opens up the floor for audiences and families to have conversations with each other that they may not have had before, or may not have felt comfortable having. I just really hope we continue a dialogue of trying to understand each other rather than pointing to our differences and our flaws and just making more divisions, you know?

NEXT UP
Culture
Netflix Is Seriously Cracking Down On Sharing Passwords
A Night Out
A Night Out With Rachel Bilson
Culture
Phoebe Dynevor Will Not Return for Bridgerton Season 3
Culture
6 Shows To Binge Once You've Finished 'The White Lotus'
Style + Culture, delivered straight to your inbox.