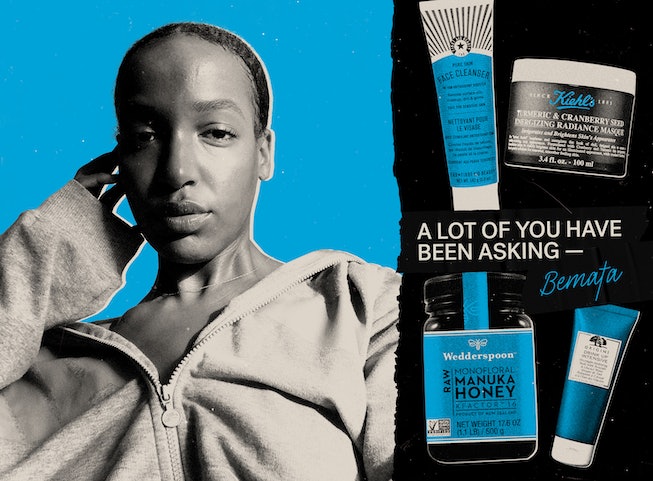 A Lot of You Have Been Asking

For better or worse, everyone puts forth an edited version of themselves online. It's a natural progression of how we've learned to use social media over the years — especially in the age of the influencer. But how conscious are we of the difference between that version and our true selves? For Bemata, an up-and-coming Brooklyn-based artist, her intentional separation of the two is what powers her work and protects her spirit.

Inspired by her name, which is Amharic for “by night,” the songstress and producer explores the themes of duality, truth, and relationships over booming tribal bass lines and electronic beats — a combination that, in non-pandemic circumstances, would be the recipe for a carefree night out, one where inhibitions are left on the cloudy dance floor or a sunken house party couch. By that nature, the halting of live performances, touring, and steamy club nights may have redirected Bemata's exploration of self, art, and music, but it certainly hasn't deterred it.

From her stark bobbed wig to her dreamy visuals, everything about the artist is intentional; both carefully and artfully crafted without feeling inauthentic or forced, a balance she refines with the help of her confidant and creative director, Eric Lopez.

Coming off the release of her newest single, "New Level / SUPERWATER," Bemata spoke with NYLON over the phone about taking full agency over her appearance, leaving corporate to create, and making dance music in a pandemic.

What was your relationship with beauty growing up?

I grew up in a house with my mom, my dad, and my sister. My mom and my sister were definitely the examples for me. My mom was a fashion designer at night and a waitress during the day, but she would make these custom Ethiopian gowns for people in our community or family members for special events. She would need someone to model those gowns, and my sister was like her doll, and so she would dress her up and they'd get photographed. I just remember thinking those photos are so beautiful and that was definitely the early model for me.

Then just people in culture like the Beyoncés, Destiny's Child; R&B, hip-hop, and the women in those scenes were definitely, those who stood out.

As you got older, especially once you hit high school, were you ever experimenting with how you looked?

My dad was super strict and wouldn't let me wear nail polish, makeup, perfume, anything like that until late high school. So, what I would do is sneak some of that stuff and change in the bathroom. Hopefully they don't read this.

But there was a lot of holding off on that and watching the girls in school who did get to experiment that and dye their hair and pierce their belly buttons and just realizing that that was never me. And that wouldn't be me. It took awhile for me to start exploring that, definitely into college.

I love a slow morning. I think that's part of my beauty ritual, just taking that extra 45-minutes to an hour to just have to myself. Then maybe do some stretching and then I'll go wash my face with First Aid Beauty Face Cleanser. I love their cleansers. I've been challenged with hydration as my skin issue, so I'm always looking for products that are extra moisturizing, extra hydrating. Then I'll do the Ultra Repair Cream Intense Hydration Cream, and just layer some Aquaphor, a light layer, on top of that after it sinks in a little bit. Then I'll put on some Supergoop SPF on my face, a layer of that every day, no matter if I'm leaving or not — shoutout to my esthetician and dear friend, Simedar Jackson.

Every two, three days or so, I'll do a mask moment and I'll use the Kiehl's Turmeric and Cranberry Seed Energizing Radiance mask. But what I'll do is mix that mask with manuka honey, and that way it doesn't dry me out, but it also brings that radiating skin tone evening in quality.

When did you decide you wanted to explore music as a career?

I always wanted to be an artist and a musician, but it just made sense for my family to go the traditional school route. So when I was in school, I chose the most creative field I could be in, but still cut it as a corporate job, and that was communications. I knew that alone wasn't it for me, so I would stay up late at night and write and explore different music scenes on the internet and try and connect with people through Instagram and just try and keep that fire alive at night.

And that's what inspired my name: Bemata means by night in my language, Amharic, and [music] became the burning flame for me to keep returning to. And eventually I just started freelancing and revolving my life around creating and music and collaborating with other creatives. So it's been a slow journey, but it felt good. It felt organic.

When it came to exploring your music and art, how did beauty have a role in navigating how you wanted to be perceived?

I definitely felt like I wanted to create a character that I could step into. That was really important to me. So I was really intentional about, what are some of the signature things that I can return to, to make this character a thing? And the bob was definitely one of those, from a practical place; like I said I've been through so many hair phases and journeys and I love my hair and I have a beautiful relationship with my hair. But from a practical standpoint, a wig made sense.

This bob resonated because it just felt like symbolically something that would resonate on a global level and in my work. And I got to speak with a lot of young people around the world and just get to know so many different cultures, intimately.

I'd love to hear more about that global aspect.

I think that global drive is something that's just inherent in me at this point. And so that's what inspired it. I chose the bob and from there it's all play, it's all fun. Me and my creative director, Eric Lopez, we just have all kinds of sessions just exploring the different worlds Bemata could dip in-and-out of and represent because I think showing that we all contain multitudes and we all can speak to and own those truths and all kinds of ways. It doesn't have to look like one cookie cutter image. It can evolve, it can shape shift. So I think that's something that drives our exploration of Bemata as an image and as a woman and just as an art form.

What has this past year meant for you and your art?

I feel like I started my journey into stillness, and just trying to understand my inner world, I want to say a year and a half before COVID started. That's when I started to transition into freelance and artistry as more of full time thing. That started with yoga for me, just trying to find accessible, yoga teachers on YouTube and trying to create that habit of stepping away, to take 15, 20, 30 minutes to myself. After that habit built up, it became something I wanted to keep returning to, and now can look to yoga and meditation, and this time I'm so grateful for them.

I feel like right up until COVID, life in Brooklyn just got to a point where it felt a little unsustainable. It just felt all too much. So there's definitely a part of me that's so grateful for the pause that this time allowed and just gave me space for all the wellness and fitness practices that I would put off because I was too busy before. I think this time really opened up the realm of healthy practices for me and just getting to know what my rhythms are outside of other people's rhythms or other job's rhythms, and just really grounding in my own practices.

What's your approach to social media, especially as you're trying to build up this character, as you mentioned?

There's just a lot of skepticism around the internet. Just like makeup and beauty, there was a very guarded approach to anything on the internet. For a while, social media was really cringey for me. I'm a very private person and creating a persona was actually really helpful for me to separate myself and my full identity and the pressure of expressing every side of myself on this platform.

Having that let me compartmentalize it a little bit and gave me the space to decide what I do want to share with others and what I want to keep to myself. I think that agency has been really important for me, but nowadays, there's definitely a sense of showing up, especially as an artist, trying to connect with new folks and build a relationship with people that don't know you. In the absence of live shows and touring right now, there's definitely a pressure to get smart and think about creative ways to connect with people online. But it's an everyday challenge.

When it comes to your music, what are you hoping that people take away from their first listen?

Oh man, I'm so inspired by music that makes you want to dance. Music with movement. And I think I'm always striving for this energizing quality with my music. And I think sometimes it might be more contemplated or more reflective, but at the end of the day, I think I want it to really spark something within you, realizations within yourself. I've been saying "rip the band-aid energy" a lot lately. Just this feeling of release. I think that's something I want to inspire, for sure.

Is that what you thought about working on your newest single, "New Level / SUPERWATER"?

This one definitely takes it up a notch for my music, from a dance kind of uptempo level, but we really wanted the song to speak to the inner transformations that are happening inside of all of us. I really wanted the song to stir up that inner power and strength. You didn't know you had to take it to that next step. And that could mean waking up and making it through the day, but it could also mean showing up for an interview, getting that promotion at work, or getting that gain at the gym. All these little moments where we have to muster up the power within us to push through.