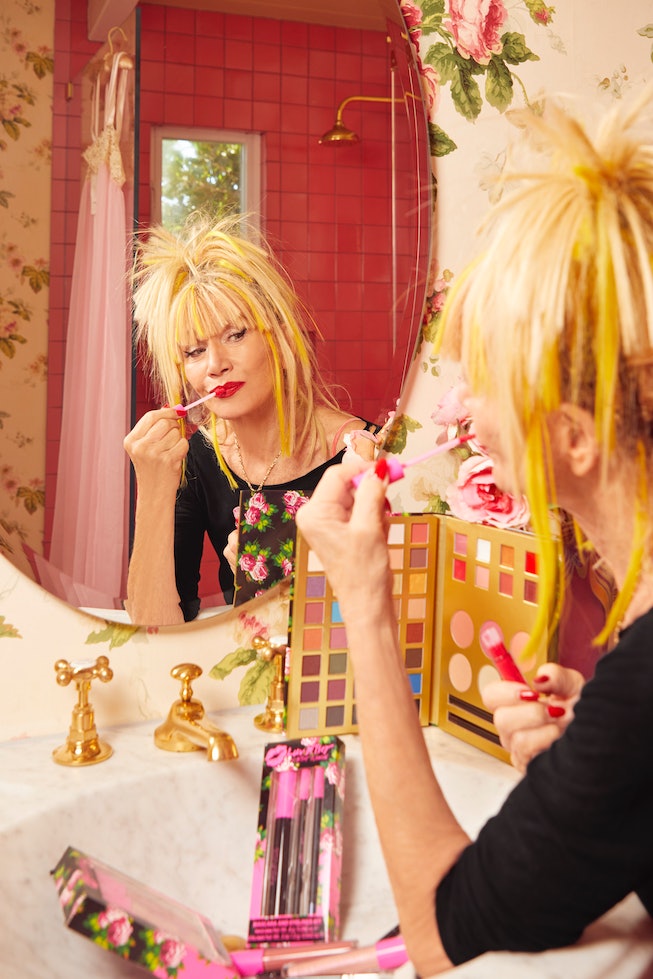 It’s hard to know where to start when discussing Betsey Johnson. For decades, she’s been a true icon to anyone who loves fun as much as they love fashion. She’s been designing clothes, accessories, fragrances, and now makeup for the better part of 40 years. There probably isn’t a millennial woman alive who hasn’t at one point adorned themselves with one of the designer’s playful, rock-and-roll-inspired leopard, rose, or skull-print garments, or poofy party dresses. Now, even Gen Z icon Addison Rae is wearing vintage Betsey Johnson on the red carpet. (She chose a vintage Betsey dress for the 2021 People’s Choice awards earlier this month, and thus solidified the designer’s cool status for yet another generation of women.)

Helping Johnson to reach an even wider audience of newly minted teens is her recently launched makeup collection, LUV Betsey!, which is available at Walmart and walmart.com all for under $15. Johnson says the inspiration for her makeup line is her young granddaughters and other creative teens. “If it works, it works. They don't care what price — the cheaper, the better,” she says. This is also a philosophy she’s lived by when it comes to her personal beauty routines. There isn’t a hint of any pretension when it comes to her favorite habits and products; Johnson still loves Olay moisturizers and has been on a forever quest for the best matte red lipstick (at any price point). She’s hardly ever seen without her signature red lips and black eyeliner that she’s been rocking since the 1980s with such dedication we have to admire it.

Below, Betsey Johnson opened up with NYLON about the time before she felt makeup was cool, her signature look, and creating affordable beauty products.

Do you remember when you first started loving beauty?

I was four years old and it was the beginning of my want-to-be-a-Rockette career. I had the best dancing teacher in the world in Wethersfield, Connecticut and she was fully into hair, makeup, costumes, and bouquets flowers at the end of the recital time. So, I was into heavy doing makeup when I was four. It started off as an extremely artsy, bizarre expression, not so much a personal expression because I had to match the 10 other tap dancers in the class. After that, it was no makeup for years and years, but I knew about it and loved it. I didn't wear makeup after that until after college.

Why did you go for so many years without wearing makeup?

Because in Wethersfield nobody wore makeup. Nobody dyed their hair. The girls that might have worn a little lipstick and dyed their hair, they were the out-there chicks. I was born in 1943, makeup in high school was non-existent and I went to Pratt and then I went to Syracuse, no makeup there at all, either. It was only after I moved to New York that I started wearing makeup.

What happened when you started wearing makeup again?

I won a guest editor contest at Mademoiselle magazine and our prize for winning was a free trip to London during the Mod and rocker time. 1965 through 1970 was really very Little House On The Prairie. It was only the ’80s that makeup started to rock. The Pat Benatar slash on the cheeks, lip gloss or bright lips, cheek bones, heavy duty lashes and strong black eyes. It was only 1980 that I started to jump into makeup 100 percent.

You have a really iconic look now.

I don't go outside of the bathroom in the morning without my red lipstick. It's a thing that probably started in the ’80s. I won't go outside my room, I won't see anybody, without bright red lips. I don't feel right. Funnily enough, when I have to talk fashion, do fashion drawings, or do anything having to do with fashion, I have to put my red lipstick on or I don't feel in the mood. I don't feel I'm right for fashion without my red lips. I never had much confidence in my look, but anyways, it was always red lipstick. Then, because of the ’80s, I got into dark eyes. I haven't gone anywhere since the ’80s. I'm still red lips, smudgy black and gray eye makeup, and fake eyelashes.

Do you have a favorite red lipstick?

I think I only discovered it six months ago, NARS Powermatte Lip Pigment in Don't Stop. I love lipsticks that don't smear off. It's the best red I've ever found in my life. I ran out of my first tube of it, so I'm desperate to find more. Between Harrods, Selfridges, and Harvey Nichols, everybody was sold out. So my daughter, Lulu, was with me in London for a week, so she ordered me five red lipsticks. It's so calming to realize you found your lipstick, when I'm so completely dependent on it.

What else is a part of your daily routine?

I basically live on face wipes. I don't care what kind, as long as it takes it all off. And then I'll use any kind of moisturizer from Oil of Olay, and that's it. Even though I have pretty good skin, I like a makeup base, a foundation. Makeup is how I relax, I give myself a half hour. Shading is the most important, you have to sculpt your face, highs and lows, highlights and darks. I can't rush it anymore. I need that time as my wake up, to get myself together and zen out, because I don't do any of that sh*t, the yoga and stuff. That half hour of putting my makeup on is extremely important.

I'm still squirting on the same fragrance I developed in 1985 and it still smells great. It comes off with a Mugler weirdness, it’s chocolatey and patchouli-esque. I love it and I try to repeat it, but I can’t reproduce it the exact same way nowadays. My last fragrance got close to my first, it's called Pretty N’ Punk. So I wear the same fragrance, I wear any old black eyeliner. I wear any old anything except for my red lipstick, which now I found my one. There’s a great red lip gloss in my new collection, but I hate to say this, I’m not so much of a lip gloss girl.

What was most important to you when you were making your own beauty products?

Just like when I started designing, what's important to me is that it's affordable. It's artsy fartsy, play around with it, enjoy it, have fun with it. There's nothing serious about it. With makeup, I just care if I like the color and I like it the way it goes on, stays on, comes off, whatever. I've never been status-y or picky. The only name brand products I wear, I steal from my daughter. I steal her La Mer, and that's about it. I feel a $10 lipstick can be better than a $50 one.

What is your favorite thing about the LUV Betsey collection?

My favorite piece is the book that you open and it's everything all in one and it’s $14.99. My granddaughters, they are my total inspiration. Ella, who's goth, she literally has black and white hair — she's a total Cruella — and she’s into makeup and so is her beautiful sister, Layla, who's 16. I geared the whole look of it for my them, because they're the age group that can afford it. They just want to play and want it to work. If it works, it works. They don't care what price — the cheaper, the better.

I believe you can make inexpensive makeup that really is good. I love being a hit to a lot of people. It's harder to be a hit to lots of people than it is to be a hit to a status in crowd. I always liked designing dresses under $100. My whole concept was I would not want to make anything that cost more than $99 because, at a time, $99 was the cost of a round trip, long weekend hotel included to Puerto Rico. I would rather go to Puerto Rico than buy a more expensive dress.

How do you feel about the state of beauty today?

I've never seen makeup be so creatively, wonderfully experimentally bizarre. I think we have very few outlets to be creative and it takes a lot of guts and a lot of nerve to experiment. But I feel that makeup says, “Here's an opportunity for you to have fun, be creative, experiment, and play around”. Realize that you can be very masculine one day and very feminine the next day. Very Marilyn Monroe the next day and very Ava Gardner or Billie Eyelash, or whatever her name is, the next day. I'm so excited that I feel makeup has finally turned the corner, there are no rules about it anymore, which I love.

It feels, to me, more equivalent to the ’60s when everything was new. I mean, it was like, no bras, white lips, big black Twiggy eyes and Sassoon hair. I mean, the 60s were as flippy as it is right now. I like that it's getting back to being really out there and experimental. We got to have some fun to balance out what's going on in the world.