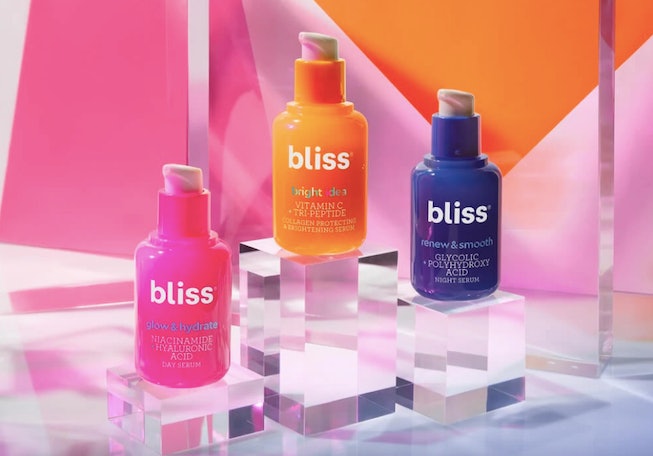 The beauty brand behind some serious skin care essentials announced it's giving back to LGBTQ+ people impacted by the ongoing pandemic. Bliss and The Trevor Project, an organization which provides crisis intervention and support to LGBTQ+ youth, are teaming up to raise awareness and funds for young people feeling the impacts of COVID-19.

The collaboration officially kicked off on April 30, with Bliss announcing in a press release that it intended to double all donations to the Trevor Project up to $50,000. Donated funds would directly support Trevor’s suicide and mental health resources like the Lifeline hotline, peer support community TrevorSpace, trained crisis service counselors, and more, which are all being relied on in increased amounts during this crisis.

As Bliss noted in its press release, supporting LGBTQ+ organizations like the Trevor Project is particularly important given the upcoming cancellation of pride events. Pride month is scheduled to return in June, but because of restrictions on public gathering, many beneficiary events that would have supported organizations like the Trevor Project have been cancelled.

Along with encouraging its fans to give back, Bliss also announced an Instagram Live telethon for the organization, which would kick off on May 1. The event is scheduled to include guest appearances from stars including MannyMUA, while LGBTQ advocate, Phillip Picardi is slated to host. The day will also included uplifting messages and stories.

Bliss notes in their press release that because of the volume of calls and the much-needed financial support, this collaboration and the resulting donation campaign was beginning earlier than anticipated. "When we heard that The Trevor Project had received more outreach, texts, and calls from LGBTQ youth in crisis than ever before in its 22-year history, we realized that now was the time to kick off our planned partnership," said Tina Pozzi, Chief Brand Officer at Bliss. "Bliss stands for unapologetic positivity and happiness, and in the face of global adversity, The Trevor Project aims to encourage and provide just that within its community. We're thrilled to stand by them during this time of need."