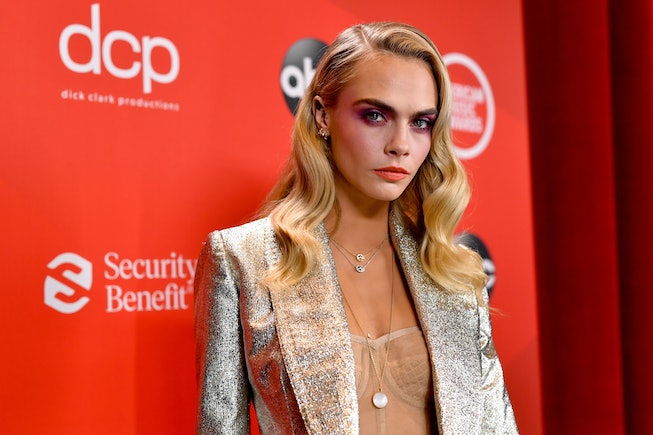 Cara Delevingne is the latest celebrity to debut a major hair change. On Monday, February 22, the model revealed her shaggy, freshly colored style, writing, "Blondes have more fun, but brunettes..."

Her photo featured tags for the beauty masterminds behind the look, including Mara Roszak, the owner of Mare Salon. "When you get a call from this Unicorn of a human wanting a change #shagcut it up," Roszak wrote of the cut and color.

Previously spotted with platinum blonde hair (and even a mullet), Delevingne's new look featured tousled pieces and a middle part. Select pieces of hair were slightly wavy, and the cut brought her hair to just above the shoulders.

The shaggy styling wasn't the only part of the look worth noting. Delevingne also wore super colorful eye makeup, likely by Molly Stern. For the makeup, the bottom of Delevingne's lids were lined in a collection of flag-shaped color swatches. The rainbow colored segments started with red at the outer corner of her eye, and continued inward, ending with a line of purple. Her remaining makeup featured a soft pink lip, along with a hint of blush on the cheeks.