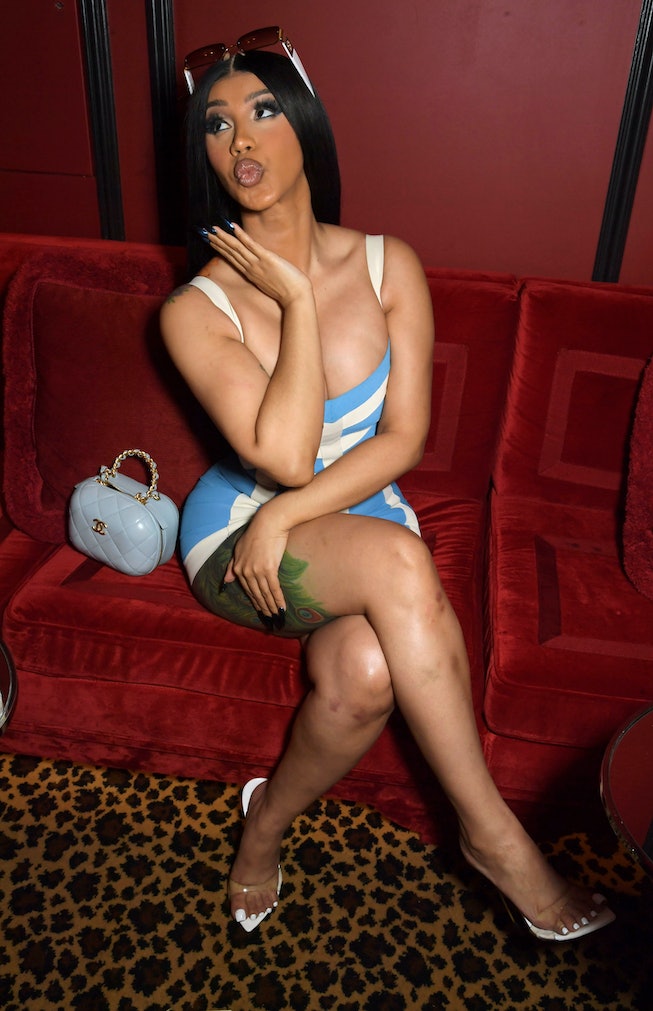 We all know Cardi B isn’t afraid to get some ink. The rapper already has full-coverage color tattoos over the back of her thigh, neck, and lower and upper back, which are often on display in her often provocative outfits. However, she had yet to tattoo her face— that was until last week. On August 14 tattoo artist Robinson De Los Santos posted a video showing himself tattooing Cardi’s jawline, showcasing the process of her first ever face tattoo.

While Cardi hasn’t posted the tattoo yet herself or any selfie where it might be seen, a fan account called @queencardixo recently shared a snap of the rapper smiling beside Robinson after the tattoo was finished. Running along her jawline, it’s hard to make out exactly what the new ink is, but we can already see thin, red lines and are guessing it’s possibly a name in script.

Back in January, Cardi suggested she might get a face tattoo, tweeting out that she wanted to get her son’s name (which has since been revealed to be Wave) tattooed there. The tweet reads, “Random but ….I’m 1% close too tatting my sons name on my face….I really really wanna do it!” Leasing us to believe that this tattoo is likely that impulse come to fruition. Waiting from January until August to have her jawline tatted means that her latest ink was a long-considered idea, which seems appropriate for a tattoo, particularly one on your face.

Cardi also has her husband Offset’s name tattooed on her leg, which perhaps suggests her new face tattoo is likely something or someone significant, despite this red ink tattoo not appearing to be her son’s name from what can be seen so far. Offset also has their daughter Kulture's name tattooed on his jawline, making face tattoos a new family tradition. Until Cardi reveals the exact details of her new ink, we’ll have to keep guessing what it might be (and refreshing Cardi fan pages for updates).