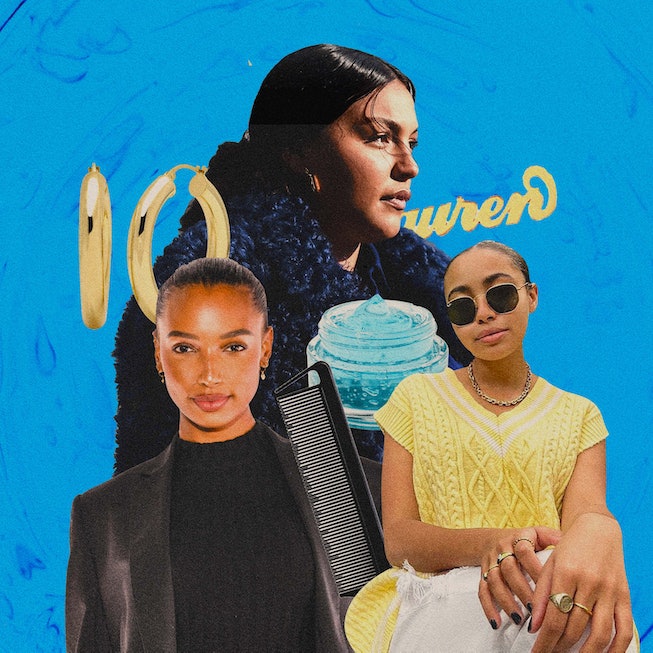 When my journey toward styling and embracing my natural hair began in high school, one of my go-to styles was a slicked-back bun. This was the perfect style because my hair was still natural and I was avoiding heat, but I wasn’t ready yet to let my curls free.

My white friends begged for me to show my curls and to wear my hair in its completely natural state because it was “different” and “unique,” but I chose to stick to the comfort that came with my slicked-back ’do. Many of the other Black girls I knew also wore this style, but to others, wearing your hair flowing down your back was seen as the most attractive look, while a tight bun was perceived to be matronly.

To my surprise, the slicked-back bun has now emerged as the go-to hairstyle among white women — a defining part of what the TikTok community calls the “clean girl” beauty trend. Credited to the model-off-duty style inspired by celebs like Hailey Bieber and Bella Hadid, the look often pairs a slicked bun with gold hoops and neat acrylic nails — two other elements that have been a part of Black and Latinx beauty cultures for years. Why is it that when I wore this look it was considered less desirable, but now it’s a model-approved style that makes its wearers “that girl”?

When Kaelyn Montoya, a marketing strategist in Austin, Texas, saw that the “clean girl” look was trending on TikTok, she was immediately confused as to how people thought this was something new. She posted a video to her page, styling her hair in a slicked bun, saying that she was “reclaiming the clean girl bun” that Latina women had been wearing for decades. Her video amassed over a million views, but was met with controversy in the comments over whether a certain cultural group could claim a look.

“When [the clean girl trend] first came across my page, it wasn't somebody that looks like you or me,” said Montoya. “It [was] a blonde [woman], she had blue-green eyes, and she was wearing what looked like prep-wear. [She had] a bun, a little bit of a hoop earring on, and [lip gloss]. It immediately felt very familiar, like something I'd actually been doing my whole life. I thought, ‘This is a trend?”

Montoya was shocked to see that her own community was left out of the mix. With both of her parents being from Honduras, Montoya grew up as a member of the Latinx community, and this bun, she says, was an important part of Latina beauty standards. She emphasizes that the look was especially prevalent among women of color who had textured hair.

Curly hair can be time-consuming to style, so for her, this was the easiest hairstyle to wear to school growing up. Despite its popularity among women of color at the time, there were still ignorant connotations around the style. “I remember being in middle school and someone asking me if I [wore] it because I had lice,” Montoya says.

Like Montoya, celebrity hairstylist Sabrina Rowe Holdsworth said this look has been a “paramount style” within Black and Brown communities — something she’s been wearing since she was a toddler.

“It has been a staple forever for good reason,” said Holdsworth. “Our hair has been often described as unruly, wild, and unprofessional. A slicked bun was a way to ‘tame’ our hair — now it's just a basic ’do for a fly girl.”

Holdsworth doesn’t really mind that the slick-back bun itself is now being worn by white women, especially because of its similarities to the French chignon, a style where the hair is pulled into a tight knot at the nape of the neck; the style also has long-time popularity in ballet. The issue with the style is when it’s touted as part of a new beauty “trend” without acknowledging its origins.

“When white women re-discover something, it becomes a trend,” Holdsworth. “[The “clean girl” look] has been around forever, so my only request is for people to stop saying it's new and give the credit to Black and Brown women who it’s completely inspired and created by.”

Montoya shares a similar sentiment. “Trend feels momentary,” she says. “It also feels like a pass and go — something that you're doing because it's cute for the moment and for the season. Our hair texture is not a season; we're going to have to wear the bun all the time because that's just the kind of hair we have. To say it’s a ‘trend’ diminishes what that identity is for us.”

Our hair texture is not a season; to say it’s a ‘trend’ diminishes what that identity is for us.

The “clean girl” look is derived from the heritage and culture of marginalized communities — which makes it unfair that white beauty creators on the app are profiting from this look that they just now decided was suitable for them. “The bun, the acrylic nails, the nameplate [necklace], the hoops — they're all things that have marginalized [us] as a group, so if you're making a profit out of it, it could be considered appropriation,” Montoya says.

In the end, Holdsworth says she doesn’t consider it a problem that the clean girl look has gone mainstream, but stresses the importance of creators giving proper credit for things they did not create. “There is very little in the beauty space that is actually new,” she says. “ As long as you approach [these looks] with respect and [proper credit], you should be fine to enjoy.”

To me, my slicked-back bun was more than just a hairstyle; it offered comfort and security in a space where I felt like both I and my hair would be judged. It started off as a way for Black and brown women to hide and conceal, but soon grew to become a core element that characterized the beauty culture of our communities — gold hoops, acrylic nails, and all. This style was important to us way before it became a trending hashtag on TikTok.

If this “trend” taught the beauty world anything, it’s that nothing is new and everything is imbued with meaning. It’s important that we understand this in order to not erase cultural groups from the narrative of their own beauty traditions. Never claim something new without proper research — because chances are, it might not have been yours in the first place.

NEXT UP
Beauty
Bella Hadid’s Clip-less Updo Is Going Viral On TikTok
Beauty
Megan Fox Is Completely Transformed By A New Blonde Bob
Beauty
Kylie Jenner Is Bringing 1920 Finger Waves to the 2020s
Beauty
No One Does #PamCore Beauty Better Than Pamela Anderson, Herself
Style + Culture, delivered straight to your inbox.