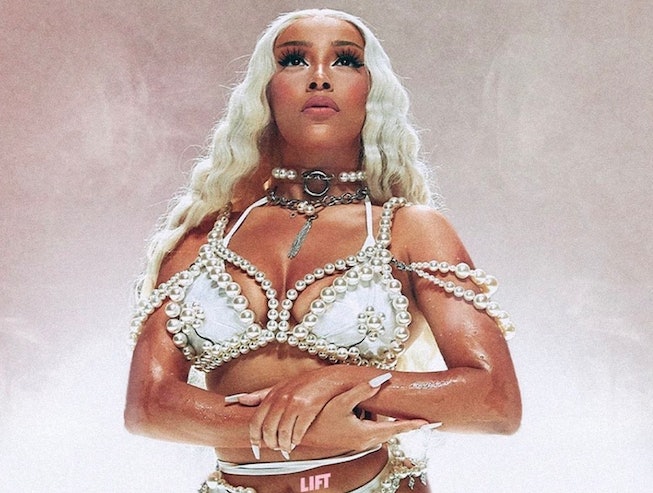 After taking over the backing soundtrack for TikTok dancers everywhere, Doja Cat has come for your beauty routine. The signer previously released a music video for her hit single "Say So," and amazing re-creation of TikTok dances aside, the clip featured look after look. The '70s-inspired video isn't the first time the performer has made her mark on the world of beauty. As Doja Cat's key makeup artist David Velasquez, who is represented by Rare Creatives, the creative television division of Rare Global, told NYLON, Doja Cat isn't afraid to try something new, even when it comes to taking a beauty cue from '90s rockers and adult film stars.

From a mesh bodysuit that was pube-friendly, to the social media unveiling of her natural hair, Doja Cat is a true trendsetter, and she owes some of that stylish success to Velasquez. The Los Angeles-based MUA has collaborated with many in the music industry including Ashanti and Saweetie, and as of late, he's collaborated with Doja Cat, creating the all-pink look for her Hot Pink album cover and the grungy, punk makeup sported in the "Boss B*tch" video. In case you're wondering what it's like to collaborate with Doja Cat on her beauty routine, Velasquez has provided the answers, giving you the inside scoop on some of her most memorable looks, and what products she can't live without.

How did you first get into makeup artistry, and what's it like getting to work with so many musical artists?

As a child, I would watch my mother apply her makeup every day. I loved seeing the looks she would create, and the immediate change in her attitude, mood, and confidence after she did her glam. That was so inspiring to me as a kid.

Working with music artists is amazing. I have so much respect for their talent. I love helping to create the energy that allows an artist/musician to go out and perform while feeling like the most beautiful version of themselves.

What does it feel like to have reached this level in your career. Was it something you had imagined when starting out?

Reaching this level in my career with an amazing creative team is the best feeling in the world. It’s everything I could ask for, as a professional makeup artist. In the past, I’ve worked with multiple artists when the team didn’t gel, and it wasn’t the right fit for me. With Doja, it felt right, from the beginning.Doing what I love alongside other passionate, talented creatives is the kind of career I’ve always envisioned.

How did you first meet Doja? How did you decide that you were the right fit for working with one another?

I first met Doja on the “Tia Tamara” music video set, when I was assisting makeup artist Scott Edit. He was doing glam for Rico Nasty; I did Doja for a few looks. We hit it off, personality wise, so I was happy to link up again when her team contacted me to do her makeup for the “Juicy” music video. That was our first fully planned collaboration, and ever since then, it’s been a wrap. “We are married,” as Doja would say. She decided for the both of us that we were a match made in glam heaven.

Doja has such an electric energy and image. What's been one of your favorite looks that you've created for her so far?

It's been an amazing ride. She's very creative, super down, and always adventurous. So we've been able to create some sick looks. I love them all. But if I had to pick one, it would be the Retro Diva Blue Eyeshadow look featured in her "Say So" music video. It's dope seeing other people re-create the look on social media.

Speaking of "Say So", there were multiple looks featured in the clip. How did you manage to make each look so individual?

Working with Doja, I'm working with an amazing team. Every event, every video, we all come together to create looks from head to toe: hair, makeup, styling, nails.

"Say So" is epic because Doja really committed to these different characters from another era. When it came to makeup, I took inspiration from Studio 54, Twiggy, and Austin powers. But I wanted each look to have a very distinct eye. I tried to create moments inspired by the visuals and mood of the song.

What does it mean to you to be in charge of creating someone's image? And what's it like working with someone on that you're both into?

Where do you draw inspiration from for your looks?

I normally get inspiration from the streets of Los Angeles and from high fashion. My current mood with glam right now is very '90s with a twist of disco funk! It’s always a party.

What are the products you frequent most working together?

Cammy Nguyen and Baddie B Lashes, Beauty Blender foundation, [and the] Iconic London ‘Prep Set Glow’ spray. One of our favorite products to use is Tatcha Silk Cream. Skin is everything. And we never leave the house without our Fenty Beauty Liquid Liner.