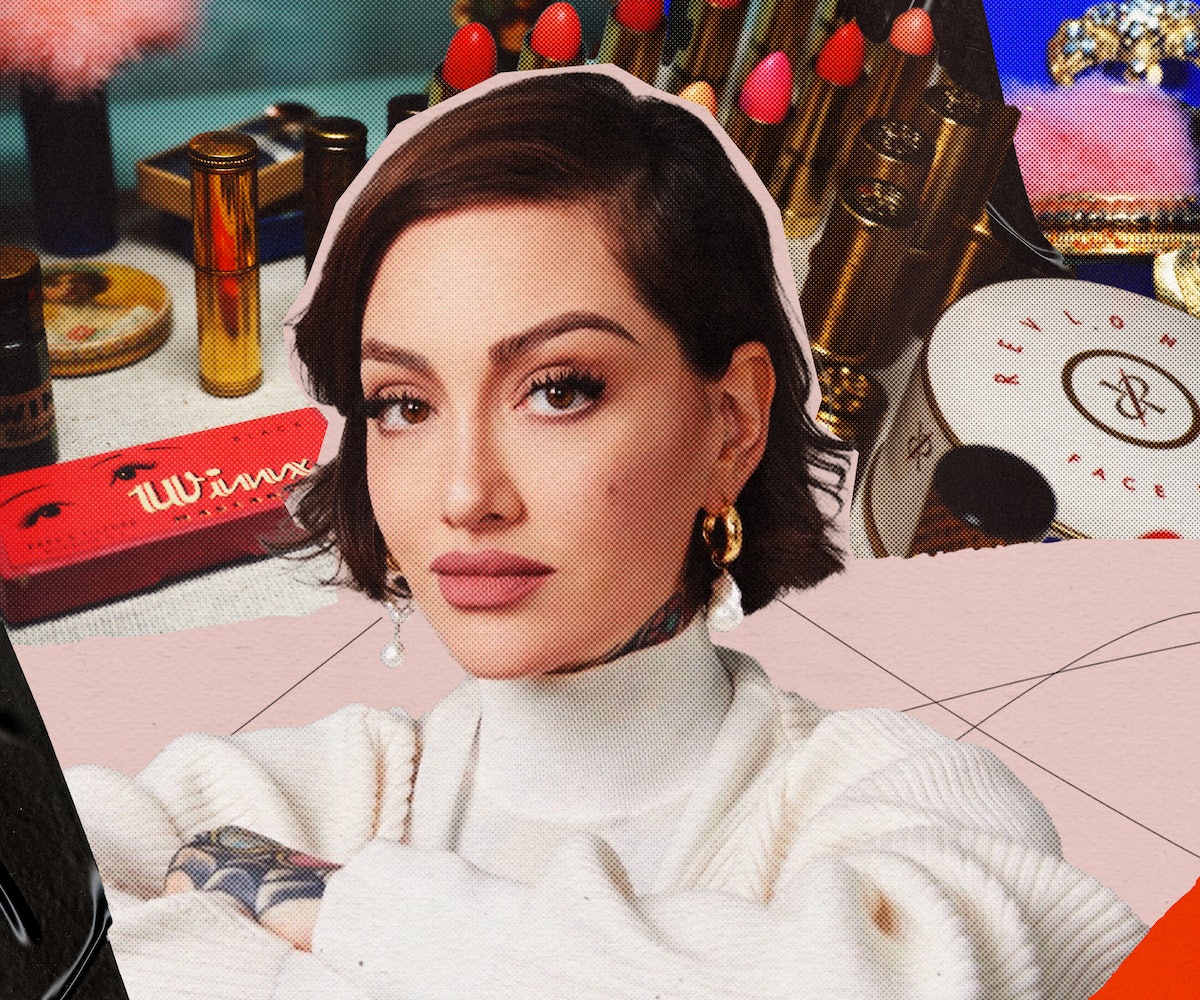 How old is the oldest beauty product you have? Be honest. Is it am 18-month old mascara? (You’re supposed to throw them out after six months, FYI.) A discontinued lipstick shade you’ve been holding onto since high school? We all end up keeping some special products past their recommended expiration dates, although sometimes unintentionally. For makeup artist, Erin Parsons, collecting vintage makeup has become somewhat of an obsession. But the pieces she’s amassing are much older than whatever is in your makeup bag. We’re talking 40, 50, and even 100 years old.

If you’ve seen Gigi Hadid, you’ve certainly seen Parsons’s work. She’s the model’s go-to makeup artist and has been working with the many faces of Maybelline New York as the brand’s global makeup artist for five years. But Parsons’s path into makeup artistry was not necessarily a linear one. “I was in the air force for about nine months,” she says. “ I started out there and then when I got out, I just needed a job.” So, she began working at a makeup counter in a department store which she considers the ultimate makeup training ground. “I worked retail for 10 years before I decided, okay, I'm going to take the leap and move to New York.”

“Once I got to New York, just to shorten the story, I pretty quickly started to assist Pat McGrath,” she continues. “I worked full time with her for seven years before I went out on my own in the beginning of 2016.” That’s about when she started to work with Maybelline (“Gigi and I had become close, so she introduced me and brought me into that”). She’s made quite a name and career for herself, but one of her newest adventures is on TikTok. Parsons goes above and beyond standard makeup and hair tutorials, she demonstrates the actual beauty products and techniques from past eras. She’s daring enough to put 1980s matte eyeshadows, 1950s red lipsticks, and even 1930s block mascaras on her own face, and we can’t stop watching.

Below, NYLON talks with Parsons about her love of makeup history, her expectations for the roaring 2020s, and 100-year old eyelashes.

How did you start your vintage makeup collection?

Collecting vintage makeup is a pretty expensive hobby if you want to get mint condition things or rare finds. I only started collecting about five years ago when I started making more money. While you could probably find things on eBay that are vintage, they might not be the best quality, or unused, which is what I always look for. I've always wanted to have a vintage collection. I didn't even know where to start, but once I found out it didn't stop.

Do you remember what was the first thing you found?

I started out not knowing what I was looking for on eBay or Etsy. Then I thought, I might just type in Maybelline vintage mascara, and then one would be there! It came in this little box. They called it a “spit block”. You just spit in it and the product is water activated with this little brush. I was so intrigued. That’s when I realized all you have to do is just search that name and it’s possible you can find what’s out there.

How do you search for products now?

I do a ton of research on makeup history. A lot of my TikToks will involve trends from past eras. I'll discover a new product and then I'll search for a sample. I grew to understand what it means to be a collector. That means looking for things that are rare, mint condition, new-in-box, or finding things at auctions.

Where you start to really find amazing one of a kind items, like Marilyn Monroe’s or Mae West’s belongings, is at auctions and you're going to bid against other people that want it as much as you do. For me collecting movie stars’ makeup from the past, that's my number one love.

What’s the most valuable thing in your collection, either sentimentally or monetarily?

It's actually both. Marilyn Monroe's eyelashes are my favorite piece and they're also my most expensive piece. I have a few things from Marilyn, but anything Marilyn is really hard to get. The last time I was bidding on an item, it was a lipstick brush and a foundation and it went for $25,000! It was crazy.

Also, one of the reasons I started collecting was the goal to collect every Maybelline mascara that’s ever existed. The very first product was something called “Lash-Brow-Ine”, which is kind of like a Vaseline sort of mixture in a little tin. I had been waiting for years trying to find it and it never came up and then one day it popped up on eBay, no one even bid on it. I bought it for $35 And it's one of my most prized possessions because inside of the container, there's not only product but there's actually someone's eyelashes from over 100 years ago, from 1917, inside of it. The fact that someone loved this product and used it and now it's in my hands feels so special to me.

How do you display your collection?

Do you have any tips for people creating their own vanity space to make it more special or more functional?

Displaying beautiful makeup can provide a bit of a push to give yourself that little bit of glamor that day. Maybe laying a palette out, but opening it to see the colors. You might be inspired to try something different that day.

How do you go about using the makeup?

If I find a product and I can find more than one — a lot of times things come in threes — I'll use it. Here’s where you have to say: "Please don't do this at home". But I just can't resist to see what the color looks like and what it smells like, to feel the texture, and see how well it wears. It's not something I'm going to keep on my face all day long, but I'll definitely try it. My TikTok actually blew up because I started testing vintage products. It’s become the place for my vintage things because people seem to really appreciate it there.

Do you have an ongoing modern makeup collection as well?

Just for my work I have six suitcases full of makeup, and then I've got drawers upon drawers of makeup. Plus, I have my personal collection. But it’s not for display, or anything.

I do have a set of the Gigi Hadid x Maybelline collection (from 2017) completely untouched. She made a lipstick with my name on it. I had some that I used like crazy. But I have another box that she's going to sign for me so I want to put that in my collection.

What's one of the weirdest things in your collection?

I love the figural compacts. I have one that’s a little guitar, you can actually pluck the strings. I also have these amazing lipstick dolls that are actually covered in real fur. One is chinchilla, one is mink. They are from the 1960s and are extremely rare to find them fully intact. I just find them very weird. Why would you put fur on a lipstick?

How has vintage makeup influenced your creative process?

I'm really into the late-to-mid twenties and even early thirties– The Jazz Age. The 1920s are when makeup really took off after it was shunned for many years. There were different periods where makeup was celebrated and then there was nothing. So during the Victorian and Edwardian eras, there was almost no makeup. If you wore visible makeup, you were either a prostitute or an actress– which were looked down upon at the time. But in the 1920s women, wore makeup as a rebellion, basically saying, “You can't tell me I have to wear something for a man”. That's why I love the 1920s so much.

I see a huge one. I feel like a lot of people are playing with makeup and it's not like ever before. People on Instagram, they will just put the craziest makeup on and it's just art. It doesn't have to have any meaning. I feel that we have that sort of resurgence now that people are just want to be unique and stand out. I think people want to have fun and be colorful.

Do you have any predictions for what makeup is going to look like this fall?

I feel people are going to be more experimental and more colorful in general. I think you're going to see, maybe a clean face with a neon eyeliner. Also, seeing more lipstick colors, I hope. It will be about makeup that doesn't feel stressful. Like sometimes an eyeliner feels stressful, you know? It’s more fun if you just wipe it on say, “Oh, that's cute” and walk out the door.

NEXT UP
Beauty
Halloween Cat Makeup Ideas, From Easy to Inspired
Beauty
Where To Shop For TikTok’s Trendy Color Eye Contacts
Beauty
TikTok Wants You To Wear Mascara Anywhere But On Your Lashes
Beauty
Olivia Cooke’s Beauty Evolution, From Indie Ingenue to ‘House Of The Dragon’ Queen