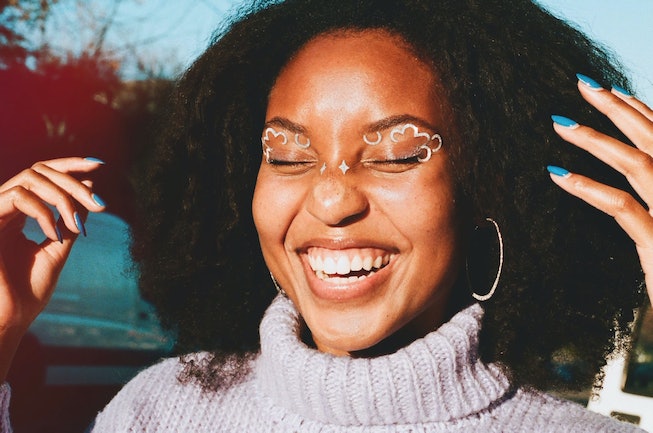 The makeup featured through Euphoria remains as relevant and trending as ever. Since its 2019 debut, the HBO series has served as a constant source of inspiration, resulting in everything from TikTok trends to IRL makeup unveilings. Fans have long tried to recreate the show's every look, and one of the show's most popular makeup moments is now easier to master than ever before.

At one point in the show, Jules outlines the shape of her eyes with clouds. It's reportedly one of the show's most popular looks, and Euphoria makeup designer Donni Davy has teamed up with Face Lace to create an easy DIY version.

Viewers can now easily apply face decals, created by Davy to their eyes. Called Head in the Clouds, the limited-edition stickers will come in two Euphoria-inspired finishes, an iridescent holographic and a silver glitter.

Retailing for $17.50 a set, 10 percent of profits will go towards Trans Lifeline. Each package will contain two sheets of face decals, and the decals can be worn with or without makeup, allowing you to create your own Jules-inspired makeup moment. Each set should give you about six to eight looks, and stickers can be reapplied to the sheet and used again.

A photograph of packaging is posted, below.